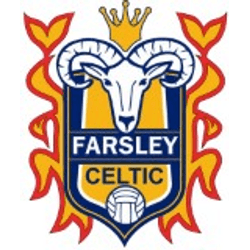 Farsley Celtic's chief executive Joshua Greaves is calling on fans to take pride in the club's achievements and look to the future after their semi-final heartache in the EVO-STIK League's promotion play-offs.

Farsley Celtic have been fined by the EVO-STIK League for playing an ineligible player.

EVO-STIK League Farsley Celtic are wishing keeper Jake Lofthouse well after he became the second player at Throstle Nest to retire this season with a serious injury.

Farsley Celtic have paid tribute to Richard Marshall after injury forced the EVO-STIK League promotion winner to announce his retirement.

EVO-STIK League Farsley Celtic are urging their fans to cheer on the club's new deaf team against Fulham on Sunday.

Farsley Celtic manager Adam Lakeland is calling for a reaction from his players in the EVO-STIK League on Saturday after apologising to fans for the hammering they suffered at Altrincham in midweek.

The current football club was formed in June 2010 from the embers of Farsley Celtic AFC which entered Administration in June 2009 whilst in the Blue Square North and which failed to fulfil its fixtures, eventually being expelled from that league early in 2010.

The old Farsley club (the name Celtic being added later) initially competed in the Leeds Amateur leagues and played its first game at the current site in 1948. Throughout the 1950s and 60s Celtic established themselves in the Yorkshire Leagues, being crowned champions in 1959-60 and 1968-69, although failing to be promoted as a result of ground regulations. A First Round FA Cup tie against Tranmere Rovers at Leeds United’s Elland Road ground in 1974 proved to be the highlight of the decade, and the 11,000 crowd that saw the Celts lose 2-0 to a Steve Coppell inspired Rovers is still the largest crowd in the club’s history.
As the Yorkshire and Midland leagues merged in 1982, Farsley began in Division One North. By the mid-80s the club was invited into the Northern Premier League.

After a few largely uninspiring seasons, the new decade brought unparalleled success. In 2004-05 under the inspired management of Lee Sinnott, the team won the Unibond League Premier Division only to have points deducted as the result of Spennymoor Town going out of business and its results being expunged. The reduction in points resulted in the Celts securing only a Play-off place, losing controversially on penalties against Workington in the final.

Promotion was secured the following season after a Play-off final victory against North Ferriby and in the following campaign, the club’s first in the Conference North, they reached the First Round of the FA Cup losing in a replay to MK Dons as well as securing promotion to the Conference National following a memorable evening at the Pirelli Stadium in Burton Upon Trent, when Simeon Bambrook’s last minute penalty saw the Celts beat Hinkley United 4-3.

A single season of Conference National football resulted in relegation to the Conference North. On-going financial difficulties saw the Administrators appointed in June 2009 with the club’s results expunged in March 2010 when the Administrator prohibited the club from fulfilling its fixtures. The re-formed club were placed in the NCEL Premier Division for their first season which turned out to be highly successful with a league and cup double recorded.

Many of the former players remained loyal to the club and top spot was held for much of the season, with the title confirmed on the penultimate weekend of the season. The club also reached two cup finals, the NCEL Presidents Cup, in which Tadcaster won but the season ended on a positive note with the League Cup being lifted despite Farsley having to play the majority of the final with 10 men.

The 2011-12 season was almost as successful, with a top five spot being secured ensuring qualification for the Play-offs. Unfortunately, the Semi-Final opponents were Witton Albion who won 3-0 and deservedly booked a place in the Final, going onto win promotion after defeating Curzon Ashton.

The following league season didn’t quite go to plan with a disastrous run in the closing months, saw Neil Parsley’s side go without a win in the final eight games. Inconsistent form before this point had all but put an end to the club’s play-off chase and a 14th place finish was all that could be mustered. On a positive note, Farsley reached the Quarter-Finals of the Doodson Sports League Cup. After beating Ossett Albion and Clitheroe, Farsley beat Premier Division opposition Whitby Town and Worksop Town before bowing out to Matlock Town in the final eight.

The side made it through to the Final of the Doodson Sport League Cup against Warrington Town in the 2014-15 season at Edgeley Park. Despite a goalless score line at full time Farsley eventually lost out on penalties. The game proved to be the last for the club as Farsley AFC as they they had their original name reinstated through the close season. On May 19th 2015 the club were officially known as Farsley Celtic FC once again.

Season 2015-16 started disastrously with only two points gained from the opening seven league fixtures and the Celts rooted in the relegation spots. The season though turned with an incredible 15 game unbeaten league and cup run, which started in mid-November with a 2-0 League Cup win over Shaw Lane and lasted until late February when Burscough won 3-0 at Throstle Nest in the league. That run put Farsley in the hunt for a play-off spot, but the pursuit of promotion was dashed during March, when a single point was taken from a six league encounters. A topsy-turvy season ended with the Celts in ninth place, seventeen points adrift of a play-off spot.

The 2016-17 campaign turned out to be a dramatic but ultimately successful one. After a season that saw the Celts battle Lancaster City all the way to the last game of the season but in which the Dolly Blues claimed the automatic promotion spot and the title, Farsley had to do it the hard way. They overcame Colne 4-0 in the Play-off Semi-Final and had to come from behind to take the game to extra-time and ultimately a 4-2 win over Ossett Town to clinch promotion to the EVO-STIK League Premier Division. The various cup competitions also proved fruitful with good runs in both the Emirates FA Cup and the Buildbase FA Trophy and the Celts won the West Riding County FA Cup, taking the trophy 4-2 on penalties after the game finished 1-1 in ninety-minutes.