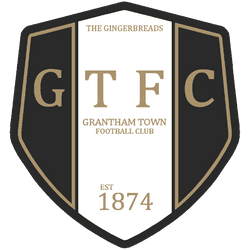 EVO-STIK League Grantham Town are looking for a new manager after Adam Stevens stood down on Wednesday in the wake of the club's play-off final defeat.

Grantham Town are urging the Northern Premier League's clubs and fans to help them win £20,000 in Marathonbet’s #NonLeagueChallenge and follow in the footsteps of 2017 winners Corby Town.

Grantham Town Gingerbreads in the final for £20k!  19 Mar 2018 By David Watters

Grantham Town are flying the flag for the Northern Premier League in the finals of Marathonbet’s #NonLeagueChallenge!

Promotion-chasing Grantham Town have been showing off their first performance accolade of the Northern Premier League's historic fiftieth anniversary season this weekend.

High-flying Grantham Town have rewarded Anthony Wright with a new contract until the end of the 2017-18 EVO-STIK League season.

The club was founded in 1874 and early competition was in the Midland Amateur league which was won in 1910-11. The Central alliance was won in 1924-25 and the club finished runners up to Shrewsbury Town in the Midland counties League in 1938. After the war local legend Jack McCartney scored 416 goals in just 456 appearances until his retirement in 1955.

In 1964 under manager Jim Rayner the Midland League was won with the club scoring 152 goals in the season. Rayner moved to Notts County to be replaced in 1965 by Terry Bly as player manager and the next 14 years are still remembered as the golden years for the club. The Midland League was won in 1971 and in 1972 and regular cup runs brought large crowds to the London road ground with the most memorable being in 1973 when Jack Charlton brought his Middleborough side to London road where a record crowd of 6,578 saw Middleborough win 2-0. The club moved into the Southern League winning Division 1 North in 1978 and the following year finishing runners up in the Premier Division. Following relegation the club bounced back the following year to win Division 1 North again.

Following the reorganization of non-league football the club were moved to the Northern Premier League and finished 4th in 1984 but the following year they failed to gain re-election and returned to the Southern League. Financial problems meant the club had little success until in 1987 The board appointed Martin O’Neil as manager and along with assistant John Robertson Promotion was missed by a single point his first season and fifth spot gained the year after. Martin moved on to climb the managerial ladder at the end of that season.

John Robertson returned as manager in 1990 and at this time the club left its London road home and after a year ground sharing at Spalding returned to the town into the new South Kesteven Sports Stadium. Little success was achieved until the arrival of Gary Mills as manager in 1996. Under Gary fourth place was achieved in the Southern League Midland Division in 1997 and the following year the championship was won also the club reached the quarter final of the FA trophy going out after a replay to Conference side Southport. The first game at Grantham attracted a stadium record attendance of 3,695.

The following year the club was taken over by Reg Brearley through his company Antrac. Mills was replaced as manager and the club went full time but huge financial losses saw the clubs future threatened when Antrac walked away. The club was forced to enter a CVA and a difficult period followed as the club struggled to get back onto its feet. This was reflected on the pitch and when John Wilkinson arrived as manager at Christmas 2000 the club had just nine points but following a tremendous run were finally relegated on goal difference on 47 points. Promotion back to the Premier division was achieved in 2002 as runners-up.

Following Wilkinson’s resignation Roger Ashby became manager and lead the club to the first round proper of the FA cup in November 2003 where they played Leyton Orient at home in front of the Match of the Day cameras only losing 2 – 1 to an injury time goal. In the summer of 2006 the club were moved from the Southern League back to the Northern Premier League. It took the club some time to adjust to the move and they were relegated to Division 1 South.

John Wilkinson then returned as manager and in 2008 lead the club to the Division 1 South play offs where they lost 2-1 to Nantwich. Following a brief spell with Phil Starbuck as manager Jim Albans and Wayne Hallcro came in as joint managers. In 2011-12 the club reached the Division 1 South playoff final losing 2-0 to Rushall Olympic but the following year they won the division by a 10 point margin. The club found life in the Premier division difficult and following the resignation of chairman Steve Boam Albans and Hallcro also resigned. After a period under former players Gary Sucharewycz and Ian Robinson they returned and led the club to 15th spot in the Premier division.

Season 2014-15 saw the club having to make the difficult decision to cut its playing budget when predicted income was not achieved. This resulted in several players leaving the club. Also departing was Jim Albans but his partner Wayne Hallcro stayed and recruited former Coalville manager Adam Stevens to replace Albans as joint manager and the pair set about rebuilding the side. Hallcro departed in late January to team up again with Albans at Belper Town to leave Adam Stevens in sole charge of team matters. Under Stevens the club finished 12th in the Premier Division and 18th the following year with 51 points.

Season 2016-17 saw the club enjoy its best season for many years with a chance of reaching the play-offs right up to the final week of the season before finally finishing in eighth spot. In addition, they reached the final of the Integro League Challenge Cup before going down 2-1 to Bamber Bridge at Leek Town's Harrison Park.