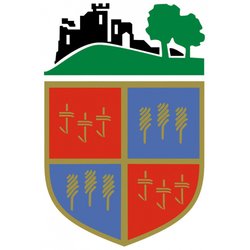 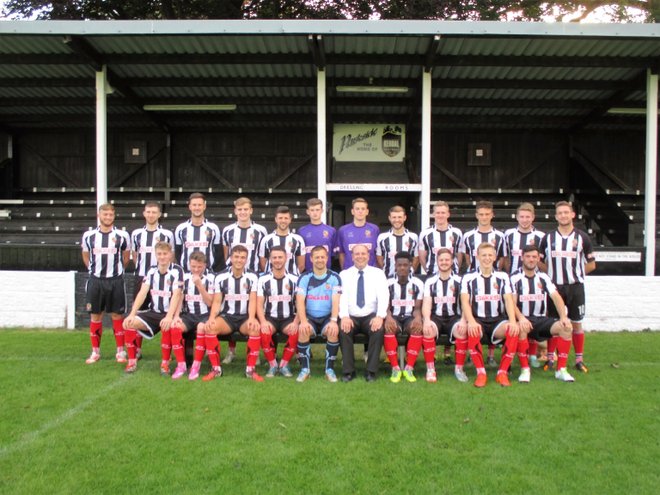 Kendal Town's Tosh Farrell has been flying the flag for the EVO-STIK League in Scotland.

Kendal Town unveiled a new stadium naming rights deal at Parkside Road on Saturday before celebrating with victory in the EVO-STIK League.

In 1945 the club joined the semi-professional ranks becoming a member of the Lancashire Combination League and for the first time in its history Netherfield AFC played against Football League opposition that year when nearly 10,000 people watched the two FA Cup ties against local rivals Barrow. Netherfield AFC was soon established as a major Non-League club by taking the Lancashire Combination Championship in 1949 and again qualifying to meet a football league side, Gateshead in the FA Cup.

Cup success was quickly becoming a tradition as in the following year, 1950, after defeating North Shields at Parkside in the 1st round the team travelled to Watford where over 15,000 people watched Netherfield AFC take on Watford in the 2nd round. Unfortunately for the traveling fans the home side ran out 6-0 winners. 1952-53 again saw Netherfield in the 1st round of the FA Cup, this time against Gainsborough Trinity where a draw at Parkside was followed with a disappointing loss at Gainsborough. The club's reputation was further enhanced when, in the 1954-55 FA Cup Wrexham were the 1st round visitors to Parkside Road and had to settle for a 3-3 draw. By the time Grimsby Town visited in 1956 it had been the 5th time in eight years that Netherfield AFC had reached the first round stage of the FA Cup.

Over 5,000 people packed Parkside Road to watch the Third Division leaders beat Netherfield 5-1, a record crowd and more than 500 more than the previous year's tie against Wrexham. The following year, 1956, Netherfield won the Combination Cup, a trophy they won again five years later in 1961. In 1963 Parkside Road again saw 2nd round FA Cup action as Netherfield held Football League side Chesterfield to a draw. The 1963-4 season saw Netherfield finish runners up to Chorley in the Lancashire Combination, striker Tom Brownlee scoring an incredible season total of 76 goals. In January of the following year Brownlee was sold to Bradford City, however Netherfield still managed to win the the Combination Championship Division 1 title that year. It was the first time they had won it since 1949 and as a bonus the reserve team won the Division 2 Championship in the same year.

In 1968 the club accepted the challenge of becoming a founder member of the Northern Premier League. However, the 1970's were not kind to Netherfield as they languished around the bottom of the Northern Premier League for most of the decade. In 1980 Netherfield and Bridlington Trinity set a record for cup tie replays that will likely never be broken, when they played each other seven times in the first round of the FA Trophy. After a total of thirteen and a half hours matchplay Netherfield won 2-0 to go through to the second round. However, the cost to both clubs was dear, a total of £1,800 and it depleted the finances of Netherfield causing the club to move down into the North West Counties League Division 1 in 1982. In 1987 the Northern Premier League expanded into a new division, League Division 1 which provided a route back for the club to play at a higher level as they joined the new Division and in 1998 the club changed its name to Netherfield Kendal.

In 2000 with the demise of shoe making in the town, and with the Netherfield site now a shopping complex, K Village, the club decided to re brand itself as Kendal Town to reflect it's relationship with the town. Although in recent years times have not been easy for Kendal Town there has been some success on the field, in 2003 they reached the final of the Marsden Cup and over 400 fans travelled to Accrington to watch them lose 2-0 to Conference side Leigh RMI.

New state of the art floodlights began a slow process of gradual ground redevelopment in 2004 and 2,500 fans turned up to watch the lights switched on for a visiting Manchester United XI squad. Tony Hesketh returned to the club for a second spell as manager in 2004-5 steering them to fifth place in the league. In the ensuing play-off final the club travelled to AFC Telford as underdogs. Although Kendal could not overhaul the favourites they won much respect from the 4,250 Telford fans watching as they narrowly lost 2-1. Later that year, the club entered into partnership with The Westmorland FA and Bolton Wanderers in an effort to improve youth football and coaching. The club achieved Charter Standard status from the FA shortly afterwards and subsequently formed a new youth club in conjunction with local club Wattsfield FC and achieved full Community Charter Standard status in an effort to improve football for boys and girls in the area.

Season 2005-06 saw the Kendal's most successful season for 40 years as they achieved a promotion for the first time in their history to the Unibond Premier League. The run-in to the end of the season was a nail-biting one and Kendal missed automatic promotion on the last day of the season by a single goal difference. A packed Parkside Road witnessed a pulsating play-off final won by Kendal Town in the last minute when former Manager Peter Smith popped up to score the winning goal against Gresley Rovers to seal a famous promotion resulting in one of the biggest pitch invasions witnessed in Kendal!

After a fine start to the 2006-7 campaign in the Unibond Premier League, reality kicked in for Kendal Town. After a series of poor results, both in the league and in cup competitions, manager Tony Hesketh resigned and was replaced by club captain Lee Ashcroft. The club hovered around the relegation zone for some time but managed to avoid relegation. The highpoint of the season was when Preston and England legend Sir Tom Finney OBE was persuaded to become club president: Sir Tom recounted he had as a teenager been turned down by Netherfield as a player by the club.

The 2007-8 season saw the club finish in mid table. The following two seasons were Town’s best in the Unibond Premier League where they secured two play-off places in a row losing in the semi-finals each time.
Longstanding Chairman David Willan was replaced by Haydon Munslow in 2010. Manager Lee Ashcroft left to join Northwich Victoria half way through the 2012-13 season taking many of the playing team with him. Steve Edmondson took over as Manager but despite winning many of the remaining games with a new hastily formed squad was unable to prevent the club being relegated.

In 2013 the club house which still runs in private ownership was taken back by the club and renamed by supporters as Finney’s (after Sir Tom). In the same year Kendal Town Ladies was formed and a local Youth Development Centre established. The 2013-14 season was one of consolidation in the Evo Stick First Division North. Former club striker David Foster replaced Steve Edmondson as manager. The season opened with hopes of a play-off place, but after a series of indifferent results David Foster departed and his assistant Michael Stringfellow stepped up as replacement. He was able to produce a number of exciting home wins against highly rated clubs but couldn’t find a consistent run of results.

The 2015-16 started well for Michael Stringfellow with good results. A troubled period then followed with an outside Lancashire based business consortium trying hard to take over the club. Internal friction amongst the club’s members was mirrored by increasingly poor results on the pitch. Chairman Haydon Munslow resigned and was replaced by George Gudgeon. Michael Stringfellow resigned and was replaced by a new coaching team led by Gary Fawcett and returning David Foster as manager. The consortium withdrew. Results started to again improve, leading to a mid-table finish in 2016-17. Foster remained at the helm for the start of the 2017-18 season.