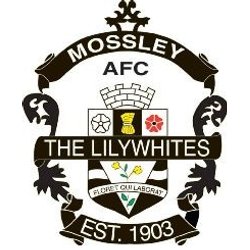 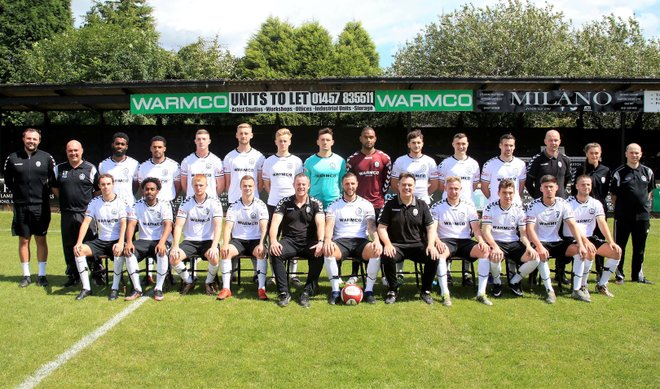 Fundraising fans and officials at Mossley have kicked off a campaign to raise £18,000 to upgrade the EVO-STIK League club's Seel Park home.

Mossley will hold a minute's silence to remember Vinny Garmory before kicking off in the EVO-STIK League against Droylsden on New Year`s Day after learning of the FA Trophy finalist's death.

EVO-STIK League Mossley have teamed up with the Oldham Athletic Community Trust to back their local foodbank's Christmas appeal.

Young Shayman Marko Basic has had his loan spell with Mossley AFC in the EVO-STIK League extended for another month.

In 1919 Mossley became founder members of the Cheshire County League, finishing runners up in the first season in both League and League Cup, returning to win the League Cup the following season beating Sandbach Ramblers in the final. Apart from many successes in the Ashton Challenge Cup and various Manchester Cup wins Mossley had many lean years in the League, rarely finishing in the top half of the table, although, in 1961 they won the Cheshire League Cup for only the second time when they beat a strong Tranmere Rovers Reserve side 6-3 at Hyde United's ground under the guidance of former Blackburn Rovers star Eddie Quigley.

Mossley's most successful season in their Cheshire League days was in 1969-70 when Don Wilson's side finished runners-up in the League, reached the 1st Round Proper of the FA Cup for the first time in 20 years, losing narrowly in a replay to Stockport County and, made it to the quarter finals of the inaugural F.A. Challenge Trophy going out to then Southern League giants Barnet.

After more than fifty years in the Cheshire League, the Lilywhites were elected to the Northern Premier League in 1972. During the late 70's, Mossley grew into a formidable force in Non-League football. They won successive League titles in 1978-79 and 1979-80 and finished runners-up in each of the next three seasons. With influential manager Bob Murphy at the helm the club also saw it's greatest moment. May 1980 saw the Lilywhites at Wembley in the Final of the FA Challenge Trophy.

After defeating supposedly bigger clubs like Altrincham, Blyth Spartans and Boston United on the way, Mossley unluckily lost 2-1 in the final to Dagenham, their first defeat in 31 games. A crowd of 26,000 were at Wembley, and a memorable day for the Club and town was captured for posterity by Granada TV in their documentary “Mossley Goes To Wembley.” At this time Mossley had the most formidable strike force in non-league football with the legendary Leo Skeete, Dave Moore and Ian Smith alongside first Eamonn O'Keefe (sold to Everton for a club record £25,000 fee), and then Kevan Keelan.

The following season saw Mossley take their only Football League scalp in the FA Cup when they beat Crewe Alexandra at Seel Park. Other League clubs faced in the FA Cup during the glory years were Rotherham United, York City, Mansfield Town, Stockport County, Huddersfield Town and Darlington. The great run of success ended abruptly in 1984 when following financial upheavals the Lilywhites finished bottom of the then one division NPL and had to seek re-election.

A gradual recovery took place through the 80's with 1988-89 being the most successful since the glory days. Under the guidance of Bryan Griffiths and the now Cardiff City manager Dave Jones, Mossley won the NPL Cup, Manchester FA Premier Cup, Reporter Floodlit Cup and at the start of the following season, the NPL Challenge Shield. After this, fortunes faded again following further financial problems with the Club narrowly avoiding relegation in 1992. The following year, after a calamitous series of results not even the return of the legendary Bob Murphy could save the Club from the drop.

Over the next two years Mossley saw no fewer than six managerial changes and the Lilywhites run of 23 years in the Unibond/NPL came to an end in 1995 when they were relegated to the North West Counties League. 1995-96 saw Mossley make a highly promising NWCL debut, involved in the promotion race for most of the season they eventually finished 4th, reaching the final of the NWCL Floodlit Trophy into the bargain.

The following season, after a bright start, the team failed to stay the pace with the leaders and finally finished in 7th position, but did have a great run in the FA Carlsberg Vase, reaching the quarter finals. In 1997 the club parted company with manager Kevan Keelan and installed another former Lilywhites player, Benny Phillips as his replacement. Season 1998-99 then saw Mossley more than unfortunate not to win the title, losing out in controversial circumstances to Workington on the last day of the season. It was a bitter pill to swallow after leading the table for the last three months which included a club record 12 successive wins.

The Millennium season saw Mossley again reach the quarter finals of the FA Carlsberg Vase, going down 3-1 at eventual winners Deal Town and slip from the title race after that blow to finish 4th. They did though reach the final of the Manchester Premier Cup, unluckily losing by a last minute goal to Droylsden at Oldham Athletic's Boundary Park.

2000-01 was a disappointing one after a great start which saw the record 12 successive wins equalled, but hampered by injuries and suspensions to key players Mossley eventually finished in mid-table. In November 2001 Benny Phillips was replaced as manager by former Coventry City and Stoke City star Ally Pickering and Mossley finished in 8th position. Mossley finished their Centenary Season 2002-03 in 3rd position, reaching the quarter finals of the FA Carlsberg Vase for the third time and won their first silverware in over a decade when beating Clitheroe 2-1 to win the NWCL Worthington Trophy at Gigg Lane, Bury.

The 2003-04 season saw Jason Beckford replace Pickering as manager just prior to the season and the club fought tooth and nail to win promotion to the UniBond League, going on a 21 match unbeaten run up to the new year. They were then hit by a 3 point deduction due to an administrative error and form took a nosedive as the team quickly crashed out of four cups and lost poll position in the League. The drama continued to the end as Mossley where just pipped to the title by Clitheroe on the last day of the season.

Promoted in second place, 2004-05 season saw Mossley consolidate back in the UniBond League, being unfortunate to miss out on a place in the promotion play off's after finishing in 7th place. In the 2005-06 season Mossley excelled by becoming Champions of the UniBond League Division One on the last day of the season, finishing two points above Fleetwood Town. This despite losing their last two games earned promotion to the Premier Division where they had last competed in 1993. Unfortunately, the joy was short-lived as the Lilywhites were relegated at the end of the season, returning to a newly reconstituted UniBond Division One they were placed in the North Division. Beckford resigned followed quickly by the retirement of the clubs Directors and main sponsors, the Rigby family after a ten year period in control of club affairs.

A new board of directors made up of club supporters was appointed in the summer and former Emley, Altrincham and Ashton United boss Gerry Quinn was named as manager in what was a hugely transitional time for the club. Summer 2008 saw Quinn replaced by former Mossley player Chris Willcock as manager and the team finished in a creditable 10th position, also reaching the final of the Manchester FA Premier Cup, unluckily losing 2-1 to Droylsden in the final at Oldham Athletic's Boundary Park.

In late December 2009 severe weather caused two of the 39 year old floodlights to collapse and the remaining six pylons were condemned meaning midweek home games were played at Ashton United's Hurst Cross for the remainder of the season. A new floodlight system was installed in the close season of 2010.
Chris Willcock resigned in January 2010 to be replaced by his former assistant John Flanagan and the team enjoyed a great run climbing to 7th position. Flanagan resigned at the end of the season and he was replaced by former Stalybridge Celtic reserve boss Shaun Higgins.

Despite a good FA Cup run to the final qualifying round Higgins reign only lasted until March 2011 when following a poor run of results and form he was replaced by former Woodley Sports boss Gareth McClelland, initially on a caretaker basis. McClelland impressed enough to be given the job for the 2011-12 season, Mossley's 100th year at Seel Park. McClelland resigned in January 2012 and former Accrington and Droylsden defender Steve Halford was appointed player manager and lifted the team to a comfortable mid-table finish. Mossley also reached the final of the Manchester FA Premier Cup but the final was never played as scheduled opponents Droylsden couldn't raise an eligible team and so the Lilywhites were awarded the trophy by default.

The 2012-13 season saw Mossley competing at the top end of the Evo-Stik League Division One North throughout the campaign finally achieving a play off position on the final day of the season. However, the team were then desperately unlucky to lose to an injury time goal at Cammell Laird in the play off semi final. The Lilywhites did, however, retain the Manchester FA Premier Cup beating Salford City on penalties in the final at Stockport County’s Edgeley Park ground following a 2-2 draw.

Manager Halford departed to Ashton United just prior to pre season and Mossley appointed his former assistant Peter Band and ex Winsford United boss Lloyd Morrison as joint managers for the 2013-14 season and with a completely rebuilt team finished just below mid-table. The 2014-15 season saw Mossley competing all season for a play off place only losing out in the last week of the campaign. That disappointment was waylaid by success in the Manchester FA Premier Cup as the Lilywhites beat Curzon Ashton on penalties in the final at Oldham Athletic's Boundary Park to win the trophy for the third time in four seasons.

2015-16 saw the Lilywhites on the fringes of the play offs throughout the season but injuries and suspensions took their toll on League form and the team had to settle for a mid table finish. However, Mossley retained the Manchester FA Premier Cup beating National League North neighbours Stalybridge Celtic 3-1 in the final at Hyde United’s Ewen Fields Stadium to win the trophy for the fourth time in five years.

2016-17 was a largely disappointing season and one which could be viewed as transitional as the Lilywhites struggled to a 17th place finish. With a strengthened squad it is hoped for a big improvement in the 2017-18 season, the popular Band and Morrison’s fifth season in charge.