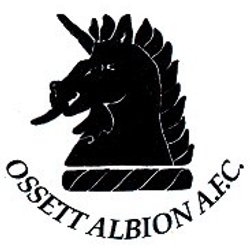 Ossett Albion's stars of the EVO-STIK League's 2017-18 season are looking forward to being honoured by one of football's hard men.

EVO-STIK League Ossett Albion have been given the green light to run their first special offer of the season at Dimple Wells for members of the armed forces, emergency services and NHS.

Ossett Albion Football Club originated in 1944 when a group of schoolboys decided to form a team to play in the local football leagues in and around the Heavy Woollen area covering mainly Ossett, Dewsbury and Batley. In those early days they could hardly have envisaged that 73 years later their club would still be going strong and competing in the higher echelons of Non League football. A football club having its origins during the Second World War is not unique to Ossett Albion but it is obviously a fairly rare occurrence.

Since its formation and humble beginnings the club has eventually achieved its long term aim and ambition of Northern Premier League football and now finds itself in the fourth tier of Non League clubs in the whole of England. Surely few of those schoolboy founders of the club, could have predicted back then what would become of their germ of an idea and where the club would be 73 years on.

Progress throughout their history has been steady and measured and at all times sustainability, at whatever level of the game they were competing, has been very much the order of the day. There has never been a “boom and bust” mentality within the organisation and successive Committees and administrations have always followed the tried and tested methods of moving the club forward while always operating strictly within its means.

While progressing steadily through the various leagues on their climb up to their current position within the National League System, Albion established a strong reputation locally and particularly in cup competitions with plenty of silverware to show for their efforts along the way. Although we have yet to see the name of Ossett Albion in the draw for the 1st Round proper of the FA Challenge Cup the club have reached the 4th Qualifying Round on several occasions only to fall at the final hurdle. This feat remains one of the club’s major aspirations.

The club also experienced a good deal of success in the FA Vase competition but fortunes since competing in the FA Trophy have been less impressive. Three West Riding County Cup wins in the mid-sixties and four in all were instrumental in promoting Ossett Albion’s reputation over a wider area of the county. Winning the Yorkshire League Cup twice in successive seasons followed by victories in the Northern Counties East League Cup on two occasions all enhanced Albion’s cup pedigree and made them a real force to be reckoned with.

They also lifted the Yorkshire League Division 1 championship trophy in 1974-1975 and the Northern Counties East League Premier Division titles in 1998-1999 and again in 2003-2004. Albion realised their ultimate goal of promotion to the Northern Premier League at the end of season 2000-2001 though survival at this level lasted only the one campaign before suffering relegation back to the Northern Counties East League from whence they came. They regained their Northern Premier League status for the 2005-2006 season and 20017-2018 will be their 14th consecutive one in this league.

The club are run by a group of directors and committee several of whom have been the backbone of the organisation for many years and they are now led by player chairman, Dominic Riordan. Dominic had a couple of spells as a player in Ossett Albion colours before taking on the role of chairman and at 30 he is one of, if not the youngest, chairmen at this level of the game. Having turned out for the first team on numerous occasions last season and, still a registered player, he is quite possibly the only player/chairman at this level of the game. After a few years of battling relegation at the wrong end of the league table it is the chairman’s aim to introduce new ideas and initiatives in order to take Albion to the next level or at the very least establish the team as a competitive outfit capable of finishing in the middle to higher positions in the table.

The group of long-serving committee men are used to seeing players spend much of their careers with Albion most notably Peter Eaton and Nigel Yarrow who played respectively over 800 and 600 games for the club and are still involved in one capacity or another. As well as progress on the field of play, the next immediate phase of Albion’s history will see the club looking to embark on a series of ambitious projects to further develop the ground and infrastructure. It has long been felt that the facilities are in need of up-dating but limited financial resources have always proved a stumbling block. Initiatives have now been put in place to increase revenues and a number of ground improvements, though still in the planning stages, are becoming realistic possibilities in the not too distant future.