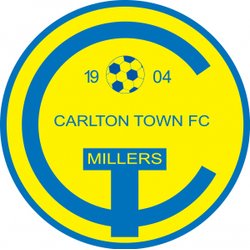 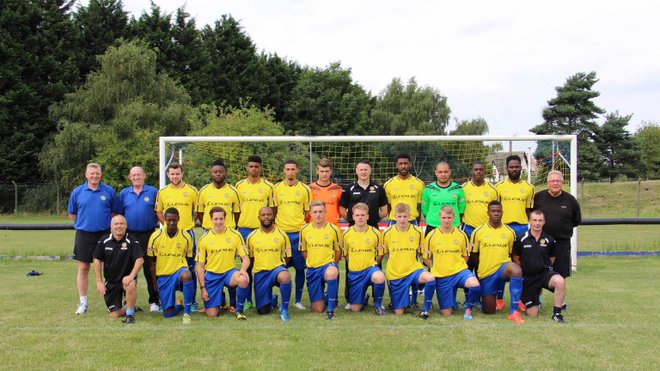 Late Carlton Town secretary Paul Shelton has been given an emotional send off by mourners before his ashes are scattered on pitch at the EVO-STIK League club's Bill Stokeld Stadium.

One of Carlton Town's main sponsors are inviting fans of the EVO-STIK League's Millers to get their hands on the Premier League trophy this weekend.

EVO-STIK League Carlton Town are to stage a memorial match for a youth team player who passed away last week after suffering a heart attack.

Carlton Town was founded in 1904 under the name of Sneinton FC and for much of the 20th century played its football in the local leagues of Nottinghamshire.

The club led somewhat of a nomadic existence, playing at various grounds, and only settled at its current location of Stoke Lane, Gedling, in the early 1990s. This move coincided with the ambition from within the Club to progress beyond the confines of local parks football and the club took the bold step of joining the Central Midlands Football League for the 1995-96 season, a move previously undertaken by only two other Nottingham parks sides.

It is perhaps from this point that the modern-day Carlton Town FC really started to take shape. The first season in the CML was reasonable, but at the start of the 1996-97 campaign the club was left with just three players and no manager. In a desperate quandary, chairman Bill Stokeld turned to former players Tommy Brookbanks and Neil Cooper who agreed to take over the managerial reigns at Sneinton, and there began a period of outstanding success.

Promotion from the Premier Division to the Supreme Division of the CML was gained within two years and Brookbanks immediately set about trying to gain promotion out of the CML and into the next step of the pyramid, the Northern Counties East League. A third-placed finish in 2000-01 should have secured that but promotion was denied due to ground grading issues.

This leads to the next stage of the story, the introduction of chairman Mick Garton. His company, MSR Newsgroup, became involved with the club in 2002 when he took over the hot seat at Stoke Lane. This financial input transformed the behind-the-scenes set up at the club and allowed close to £200,000 to be spent over subsequent years upgrading the ground and facilities to ensure that promotion, should it be achieved, would not again be refused on ground issues.

In 2002 the Club changed its name to Carlton Town and in that first season under their new name they won the CML Supreme Division title by one point from Sutton Town, clinching the championship with a last day 3-1 win against Holbrook. As a result, the Club were promoted to the First Division of the NCEL. Three years were spent in this division, during which the Millers improved year on year, missing promotion in 2004-05 by just two points. However, on 23 October 2004, Club President Bill Stokeld passed away, collapsing whilst watching Carlton. Bill had been involved with the Club for over 50 years and a player, secretary, chairman and president and without his financial assistance and sheer effort, the Club simply wouldn't exist today. It is fitting that his name lives on through the name of the stadium itself.

2005-06 saw the Club romp to the First Division title, finishing eight points ahead of runners-up Retford Utd. The campaign was built on an excellent start and the 64-goal contribution of strikers Steve Chaplin and Phil Bignall. As the Club prepared for life in the Premier Division of the NCEL, the building of a new road through the site of the old pitch meant that the Club couldn't play at home for the first month of the 2006-07 season. The ground was moved to a site adjacent to the road and despite the disruption, the Club enjoyed an excellent season, always being near the top of the table. The Club were also aware of the fact that the FA was planning to expand step four of the National League System, the step immediately above the one they were currently in.

The Millers travelled to Garforth Town on the final day of the 2006-07 season needing a point to finish third and gain a second successive promotion. Garforth, meanwhile, were themselves in fourth place and knew that a win would enable them to leapfrog Carlton. In front of a crowd of 560 (and bear in mind the reverse fixture had attracted 52!), Dean Gent was Carlton's hero, scoring in the 94th minute to clinch a 2-1 victory and send the Millers into the Northern Premier League First Division South. This was of course, subject to ground grading approval which was granted after a lot of hard work at the Club, which involved new changing areas, toilets, hospitality, tea bar and the like.

The Millers finished a creditable tenth in their first season at this higher level, and went even better in 2008-09, never being out of the play-off positions and eventually finishing in fourth place. This led to a play-off semi-final at Stocksbridge Park Steels where Carlton recovered a 2-0 half time deficit to be level at 2-2 within 10 minutes of the restart. However, the Yorkshiremen were too strong and eventually ran out 5-2 winners thanks to a hat-trick from future Premier League winner and England striker Jamie Vardy before themselves sealing promotion with a play-off final win at Belper Town.

Although 2009-10 began promisingly league form was inconsistent and the side eventually finished ninth in the table. The Club enjoyed some of its best cup results in recent years and made it through two rounds of the FA Cup before being finally knocked out in a replay by higher-ranked Nuneaton Town, having drawn 1-1 in Warwickshire in front of a crowd of 905. The Club's youth team were also the only Unibond side to make it into the second round proper of the FA Youth Cup, before going down to Stockport County.

Following the end of the campaign, manager Tommy Brookbanks announced he was leaving, after 14 years, to take over at Premier Division Hucknall Town. He took with him most of the first team players and coaching staff, plus the youth academy set-up, leaving new boss Les McJannet, formerly of near neighbours Glapwell, to build a squad from scratch over the summer. Indeed, the 16 players who lined up for the opening match of the 2010-11 season contained just one member who had been at the club the previous year.

Nevertheless, with most Millers fans expecting no more than a relegation battle, McJannet's side got off to a wonderful start to the season, winning 12 of the opening 15 league fixtures and briefly topping the table in November. A poor run of form in January and February saw Carlton drop out of the play-off places and although the side rallied late on with some impressive results, they eventually finished just outside the play-offs, in a creditable eighth place.

They did however make it to the final of the Notts Senior Cup for the first time, beating Brookbanks's Hucknall 3-2 in a thrilling semi-final. Although they were eventually well beaten 6-1 by Conference North outfit Eastwood Town at Mansfield Town's Field Mill ground, they more than held their own for the first hour and approached the 2011-12 season full of confidence.

That confidence was fully justified as Carlton enjoyed an outstanding campaign. After a slow start the Millers really hit form in November moving into the top three in the table where they stayed for the remainder of the season. They eventually finished second, pipping Ilkeston to runners-up spot on goals-scored with a last minute goal on the final day of the season, their 101st of the campaign. However, there was to be the heartbreak of a penalty shoot-out defeat at home to Leek Town in the play-off semi-final and that after surrendering a 2-0 lead to draw 2-2 during the 90 minutes.

The club was unable to maintain that level of form throughout 2012-13 and an inconsistent league campaign eventually saw a 12th placed finish. However, the cups brought tangible success. Carlton made it through to the third qualifying round of the FA Cup for the first time in the club's history before bowing out to ex-Football League side Bradford (Park Avenue). That was only the precursor to McJannet bringing home the Millers' first silverware in seven years as Carlton won the Notts Senior Cup for the first time ever, with a 5-2 win over the manager's former side Sutton Town in the final. And that despite having to play centre-half Grant Brindley in goal due to an injury crisis!

The Millers made a great start to 2013-14, winning their opening five matches without conceding a goal. However, McJannet struggled to put out a settled side and results suffered, with Carlton eventually finishing tenth in the table. Once again, the team save its best performances for the cup competitions, with another third qualifying round appearance in the FA Cup and a best-ever semi-final showing in the League Cup in a run which saw Carlton beat three Premier Division sides including a memorable quarter-final win at home to FC United of Manchester. The Millers also retained the Notts Senior Cup in some style, beating Rainworth MW 6-2 in the final.

2014-15 was a huge disappointment. The Millers opened with three defeats and never really recovered, spending far too much of the season flirting uncomfortably with relegation, eventually finishing in 18th position and failing to win any of their last 13 matches. Early exits were made in all cup competitions and at the end of the campaign McJannet decided to call it a day.

He was replaced for 2015-16 by his assistant Wayne Scott who had led the under 21s to an impressive second place in their division in McJannet’s final year. Scott had to deal with the departure of a number of players and it showed in the opening months of the campaign as Carlton struggled for form and consistency and as a result hovered in and around the relegation zone for the first six months of the season. However, the team clicked in March, winning five out of seven games including four in succession away from home and finished in 18th position again, well clear of the drop. They also enjoyed another cup run in the league cup, making it as far as the quarter-finals.

Millers fans will be hoping that the improvement shown over the last two months of the campaign will be replicated at the start of 2016-17 as Scott looks to lead his side into the top half of the table.