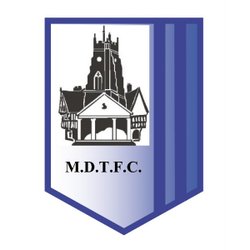 Market Drayton Town's new chairman Paul Moore will outline his plans for the EVO-STIK League club to fans at an open meeting on Tuesday night.

EVO-STIK League Market Drayton Town are hoping the good times are on the way back with Martyn Davies set to return as manager next week and a new chairman in place this weekend.

EVO-STIK League Market Drayton Town are looking for their third manager of the season after Carl Abbott stood down.

Former Hinckley AFC boss Carl Abbott is looking forward to managing in the EVO-STIK League for the first time after being named as the successor to Martyn Davies at Market Drayton Town.

Market Drayton Town expect to have a new manager at the helm within days after ending the reign of Martyn Davies.

Market Drayton Town FC has roots which go well back to 1893. Records show that the main game that season was against Blackburn Rovers and other games were played against Shrewsbury, Wellington and Oswestry. Drayton must have had a team of repute as three teams were operating in the town up to the end of 1930. The Town team was known as the Nomads and played on the Maer’s Lane ground – now the site of Pork Farms (ex Palethorpes). Attendances were up to 500 supporters in attendance at most home games.

Just after the war in 1946, the town ran two teams – one in the Market Drayton and District League, another in the Shrewsbury and District League. In the season 1952- 53 the Town successfully applied for membership of the Shropshire County League and played that year in the Challenge Cup Final at the Gay Meadow, Shrewsbury Towns previous ground. After a number of years, winning local cup and league trophies, the club moved into the West Midlands League gaining promotion swiftly into the West Midlands Premier League.

The club improved vastly over this period and in 2004-05 saw Town achieve runners up spot to Tipton Town in the League. In the same season Town also won the Shropshire Challenge Cup. In the following 2005-06 season Town finally gained promotion to the Midlands Alliance by winning the league by 18 points. After a long season in 2008-09 where Town played 56 games, Town achieved their main objective and were crowned Midland Football Alliance League Champions, finishing 8 points ahead of second place Barwell Town, and gaining promotion to the then Unibond Division One South.

In their first season at Step 4 of non-league football in 2009-10 Town finished 13th in the League – and entered the FA Trophy for the first time. In the seasons 2011/12 through to 2014/15 Town have finished 16th,15th 19th and 19th in the now Evo Stik Division One South. During this period there have been various managers including Simon Line, Jimmy Mullen, Andy Cooke, Greg Clowes and Dorian Garner.

In December 2014 Town appointed Martyn Davies as player - manager. Martyn is a club stalwart who has scored almost 300 goals in his time as a player for the club. Having staved off relegation in 2014/15, last year 2015/6, was Martyn’s first full year as manager and led the team to their best ever league performance by finishing in 11th position and for a while were thereabouts in the play off places.