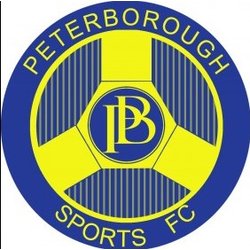 Peterborough Sports football club was founded in 1908 and were initially known as Brotherhoods Engineering Works a non-competitive factory side for the company that was founded by Peter Brotherhood in 1867 that was famed for designing and manufacturing the first steam turbine engine in the world.

The club honours its heritage to this day with the turbine engine featuring in the club badge and ‘The Turbines’ as the club nickname. We were called Bearings Direct in the 1990's and then changed to Peterborough Sports all at the same Lincoln Road ground which underwent a major revamp in 2012-13, with a ground fit for Step 3 the ultimate aim.

The club started competitive life in the Northants League in 1919 (which became the UCL in 1934) winning the title in that first season before joining the Peterborough League in 1923. The club once entertained Tottenham Hotspur at Lincoln Road before the 2nd World War in front of a crowd of 4,000 at a time when a stand went down the whole length of the ground and drew over 3,000 for the visit of local rivals Peterborough & Fletton United (now Peterborough United).

Without doubt the club’s most famous player is Victor Watson who played in the Northants League title winning team of 1919-20 before moving onto West Ham United for £50 via Wellingborough in March 1920. He remains the Hammers record goal scorer with 326 goals from 505 appearances. Watson played five times for England, scoring four times between 1923 and 1930, his haul including a brace against Scotland in 1930. He also played against Bolton in the first FA Cup Final at Wembley in front of 200,000 fans.

Much of the club’s early years were notably unsuccessful. The Northants League win in 1920 was followed 6 years later with a Peterborough League Division 3 title in 1926, with a gap then to the Peterborough Football Association Minor Cup win in 1940. The barren spell of success continued right up until 1976 when the Peterborough Division 3 title was secured again, which was repeated in 1981. The club enjoyed a brief golden period at the start of the 1990’s with promotion secured back to the Peterborough Premier Division and 2 Northants Lower Junior Cups being landed in 1994 and 1995 under the management of current chairman Stephen ‘Tommy’ Cooper.

The club again had some barren time before the Turbines suddenly became successful in the 2006-07 season when both the Peterborough Premier Division and Northants Junior Cup were secured for the first time in the club’s history under the management of Al Lenihan & Tommy Flynn. Unfortunately, the club did not follow up on this success and in the ensuing years almost went out of existence.

It was only the efforts of current life president Colin Day (who has been at Sports over half a century), secretary Roger Martin and manager Chris Bartlett that kept the club running. Tommy Cooper returned to the club in the role of chairman in January 2011 and in that 2010-11 season the club secured its first PFA trophy since the Second World War when lifting the Challenge Cup and were promoted back to the Peterborough League Premier Division for a short two season stay.

Bartlett was replaced as manager by Seamus Morgan for the 2012-13 season and the former Peterborough Northern Star reserves manager steered the club into the United Counties League with a 3rd place position in 2012-13 when Netherton turned down their promotion having finished in 2nd. The Reserves enjoyed three successive promotions after reforming at the start of the decade and are now in the Peterborough League Premier Division themselves, which they won in 2016-17.

The club’s first season at UCL level started well but ultimately ended in a disappointing 16th placed finish with Morgan replaced as manager by former QPR & England Under 21 manager Chris Plummer in January. The following season 2014-15 saw the side challenging for promotion right to the end of the season but a run of seven away games to finish saw them eventually finish in fifth spot.

At the end of that season Plummer stood aside and his assistant Jimmy Dean took the reins for the 2015-16 campaign. In his first year the club won the title at a canter by a huge 21 points, helped by winning their first 23 games. The side also picked up the UCL League Cup, becoming the first side from Division 1 to ever do so, after a penalty shoot-out triumph against Premier Division Holbeach United. The side also added the Northants Junior Cup for a second time and the prestigious Hinchingbrooke Cup for the 1st time and were to be forever dubbed the Fourmidables.

That success was continued into the 2016-17 as the team won the UCL Premier Division with a league record points tally of 112 and were the top scorers in the top 11 levels of English football with 150 in the league and 205 in all competitions. The Hinchingbrooke Cup was also retained with a 2-1 victory over second-placed Deeping Rangers. The champions also had their best ever run in the FA Vase in reaching the 4th round. Following promotion to the EVO-STIK League, the club will enter the FA Trophy for the first time in 2017-18.