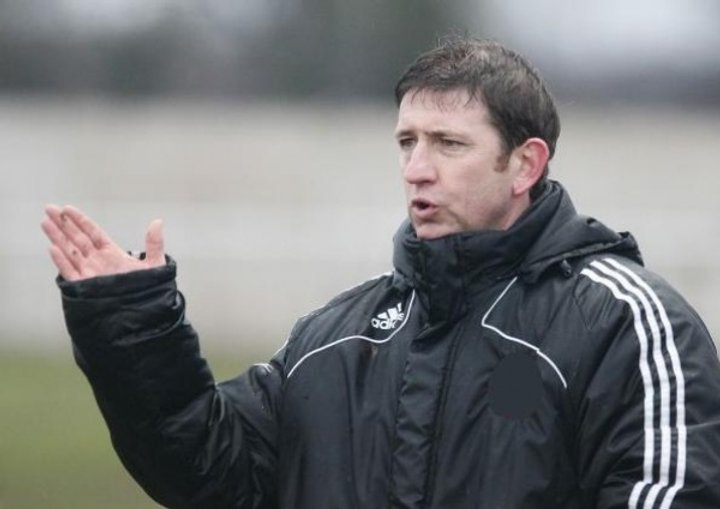 Belper Town Football Club is pleased to announce the appointment of Peter Duffield as its new first team manager. He will be assisted by Mick Godber and Sean Heard.

Duffield replaces Tommy Taylor who resigned his position at the end of last week.

He began his career as an 18-year-old with Sheffield United in 1987. In his time at Bramall Lane he made 58 league appearances and scored 16 goals. He went on loan to six clubs in as many years, namely Halifax Town, Rotherham United, Blackpool, Bournemouth, Crewe Alexandra and Stockport County.

In September 1993 he joined Scottish club Hamilton Academical, where he made his name. In two years at Douglas Park he scored 38 goals in 72 league appearances. After leaving Hamilton in 1995, Duffield went on to play for four other Scottish clubs: Airdrie, Raith Rovers, Morton and Falkirk.

In 1999 he signed for Darlington on loan and later that year made the move permanent. He was on the move again the following year, joining York City. Duffield then moved to Boston United for a season, before joining Carlisle United in 2004.

After Carlisle were relegated to the Conference, Duffield joined Conference North neighbours Alfreton Town, before joined Retford United as a player in 2006 and taking over as manager in 2007. Peter enjoyed four successful years at Retford, winning the Northern Counties East Premier Division and President’s Cup as a player, as well as his managerial successes, winning the UniBond League Division One (South), twice, the UniBond Chairman’s Cup and the Notts Senior Cup.

Mick Godber has also enjoyed a prolific goal-scoring career which began with Staveley Miners Welfare where he scored 43 goals in two seasons before moving to Sheffield FC to become top scorer in the Northern Counties East League with 36 goals in the 1999-2000 season.

Godber then moved to Ossett Albion, but Alfreton Town signed him in December 2001 and the considerable total of 103 goals he scored whilst playing for the Reds helped them get promoted back into the UniBond League that season and then win successive promotions to get them into the newly-formed Nationwide North, before he left North Street after five seasons to join NCEL Retford United alongside Peter Duffield in August 2006.

Godber continued to find the back of the net for his new side, the popular striker scoring a massive 106 goals in 135 games over a period of four seasons that saw the Badgers gain promotion to the UniBond League Division One South in that first season and repeating the feat the season after, as assistant player manager.

Belper Town FC would like to wish Peter, Mick and Sean every success in their new jobs at Christchurch Meadow.