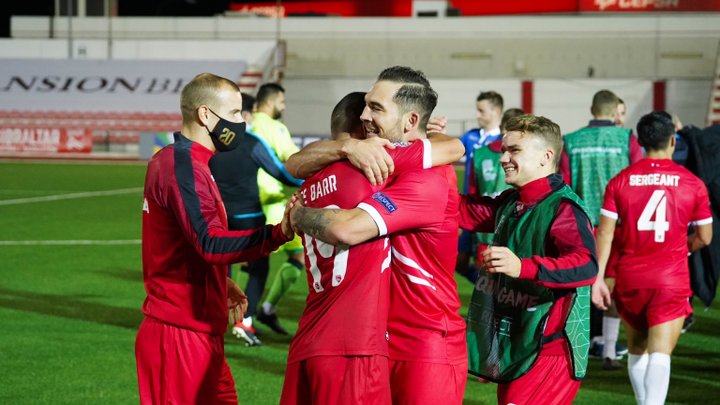 IT would be difficult to find a more contrasting pair of consecutive matches than those played in by Reece Styche in recent months.

More than 100 days after featuring for Buxton in their FA Trophy defeat against City of Liverpool, the striker returned to action in a World Cup qualifier as he led the line for Gibraltar in Montenegro.

It did not take the 31-year-old from Cannock long to find his feet and he marked his 13th cap with his second international goal, a confidently-taken penalty which levelled the game at 1-1.

Gibraltar ultimately went down 4-1, in between defeats against Group G heavyweights Norway and the Netherlands, but Styche relished the opportunity to get back to competitive football on such a grand stage. 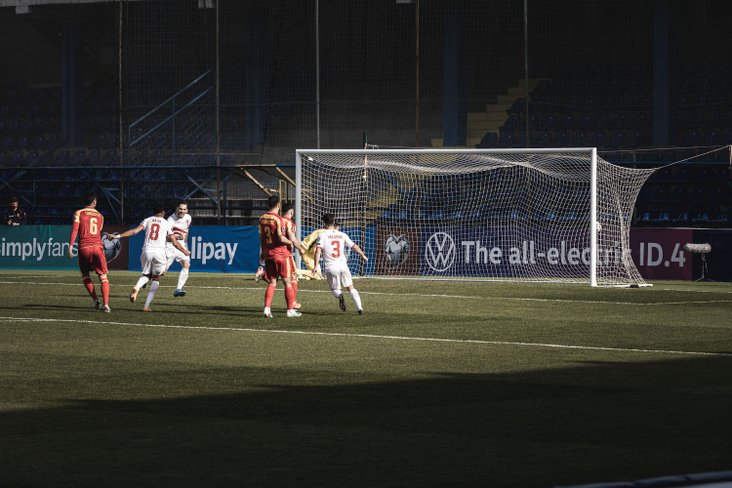 Reece Styche scoring from the penalty spot for Gibraltar, courtesy of Gibraltar FA

“I wasn’t nervous at all,” he said. “I put the fitness work in over here at the start of the year and I went over the lightest and fittest I’d ever been.

“I haven’t started many games for Gibraltar but I didn’t feel overawed. I just wanted to go out and enjoy it, with anything else a bonus.

“When we got the penalty, I grabbed the ball straight away. We hadn’t decided who was on them but the manager (Julio Cesar Ribas), who calls me ‘Brutus’, said ‘Brutus takes’.

“The feeling was amazing, more so as I knew my family were watching at home. My nine-year-old son, Carter-Rui, is football mad and loves seeing me on the telly.

“Even walking out the tunnel, I knew they were watching and it was surreal. This overwhelming pride just came over me.

“That’s why I still do it. I’ve had times within the GFA of not playing, being in quite a lonely place in the hotel on your own, but those moments make it all worthwhile.”

Styche was an unused substitute against Norway and the Netherlands, denying him the chance to share a pitch with the likes of Erling Haaland and Georginio Wijnaldum.

Gibraltar – ranked 195th in the world – held out for more than 40 minutes against both before eventually succumbing 3-0 and 7-0 respectively but the Bucks frontman feels his side are continually improving, pointing to their UEFA Nations League promotion last year.

Styche also hit back at ‘disrespectful’ criticism from the likes of Gary Lineker and Ally McCoist, who were among those to question whether the lowest ranked sides should play European heavyweights during the recent international break.

“We are part of UEFA, why shouldn’t we be involved?” said the striker, who qualifies to play for Gibraltar through his grandmother.

“We won’t develop as much by playing the same level teams all the time.

“That’s what the Nations League is for, and that’s where the more competitive games are, but the young lads coming through need to be playing against tougher opposition. It’s huge for us to play against these players.

“I just think it’s a bit ignorant and disrespectful – they are entitled to their opinion but from my point of view, 3-0 against Norway isn’t a massive defeat. We are more than holding our own.”

When his quarantine period ends next week, Styche is looking forward to returning to training with Buxton – one of 228 Trident League clubs supported by Pitching In, a landmark grassroots sport investment set up by Ladbrokes, with the support of its owner Entain.

Following the curtailment of a second successive campaign, next season’s Pitching In Northern Premier League campaign will get underway on August 14 and Styche insists he will be treating centre-halves with the same respect as those he meets on the international stage.

“When I go on the pitch, it doesn’t matter to me who I’m playing against,” he said.

“If I’d come on against (Juventus and Netherlands defender) Matthijs de Ligt last week, I would have thought no more of him than someone playing for Radcliffe.

“Ultimately, it’s an opponent you have to try and get the upper hand over, whether they play in the Champions League or Northern Premier League.

“I just love playing football, no matter who it’s against. It’s no different to me playing for Buxton or Gibraltar – the only difference is the amount of people watching!”

Ladbrokes, with the support of its owner Entain, has launched a multi-million pound investment programme, Pitching In, designed to support and promote grassroots sports. For more details see: https://entaingroup.com/entain-foundation/pitching-in/