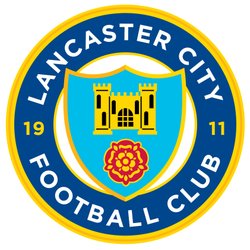 Lancaster City have confirmed the signing of goalkeeper Curtis Anderson from Wycombe Wanderers.

Lancaster City have announced the signings of Sky Sinclair and goalkeeper Wyll Stanway.

Lancaster City’s Paul Dawson says the 2021/22 Pitching In Northern Premier League season is a year where anyone is capable of winning.

Lancaster City have announced that striker Matthew Blinkhorn has left the club.

The Club was born out of meetings at the Market Hall Tea Rooms, Lancaster on 9th May 1911 and 7th July 1911. There had been a lot of local support for having another representative side in the Lancashire Combination since the demise of the previous Lancaster FC in 1910, the main driving force being Mr John McGregor. The Club’s application to join the Lancashire Combination was accepted at a Combination meeting on 1st June 1911 and they were notified that they would be one of 16 teams playing in the Second Division of the Combination in 1911-12.

The Club’s opening fixture was a 2-0 victory against Great Harwood on the 2nd September 1911 at Quay Meadow, Lancaster, unfortunately this one of only four victories in the season and Lancaster finished bottom of the Division in 16th place with the following record:-

A steady improvement over the following three seasons saw the Club finish in second place in 1914-15, the final season before the Great War, and in that same season record a club record in the FA Cup when defeating Appleby 17-2.

There was no further competitive football until 1919 but on the resumption Lancaster finished second in 1919-20 season and fifth the following season in the Lancashire Combination, there now only being one Division. It was at this point that the club’s ambitions suffered a massive setback when they were refused admission to the new Third Division (North) of the Football League, had the club entered the league their standing today may have been very different. Town did take advantage of the absence of the clubs who had been elected to the league by winning the Lancashire Combination for the first time in 1921-22, and then again in 1929-30. The club also had a great FA Cup run in 1921-22 that saw the Blues knock out Third Division clubs Stockport and Barrow.

In the 1930s, Town won two more Combination titles and managed to attract regular crowds of around 3,000, equal to many league clubs at that time and during the next decade the club had more successes as it added back-to-back Championships in 1934-35 and 1935-36 and won the Lancashire Challenge Trophy in 1930-31 and 1933-34. The town of Lancaster was given its City Charter in 1937, one of the cities to be granted the charter as part of King George VI’s coronation celebrations and the club was appropriately renamed Lancaster City, but this new status never brought any luck with it as City have failed to win the League title since.

After the Second World War ended in 1945, City enjoyed some tremendous support with gates reaching 4,500 but failed to build on it although they did reach the FA Cup 2nd round in 1946-47 and were Combination Runners-Up and Lancashire Junior Cup Winners in 1951-52.

Since the 1960s Non-League football has always been in something of a state of flux, new leagues and divisions being created on a fairly regular basis. This restructuring saw City playing teams from a much wider geographical area than previously due to their presence from 1970-71 in the Northern Premier League. In 1972-73 City reached the FA Cup 2nd Round Proper but lost out by the odd goal against Notts County. In 1976-77 City achieved their highest Northern Premier League finish of seventh and in 1979-80 City were the League Challenge Cup runners-up when losing 2-0 to Runcorn at Manchester City’s Maine Road Stadium.

In 1982 the Clubs fortunes nose-dived when City, finishing in 17th position (three places above their local rivals Morecambe) asked to drop down to the North West Counties League for the following season due to financial difficulties.

There ensued five seasons in the North West Counties League, the final two in Division 2 after being relegated in 1984-85. The formation of the Northern Premier League First Division in 1987 propelled the club back to a higher level as founder members but success eluded City until 1994-95 when the club won the President’s League Cup, a feat they duplicated the following season. The comeback was completed by also winning promotion in 1995-96 and thus doing the ‘double’ in what was now the Unibond League and during the same period the club opened its new social club, the Dolly Blue Tavern. Now in the Unibond Premier League City consolidated a mid-table position and completed the decade with a sixth position in the League and victory in the NPL Challenge Cup against Worksop Town.

The new decade started where the last one finished, regaining the NPL Challenge Cup and recording our highest League position so far of fourth and this feat was bettered in 2001-02 when a third spot was achieved. In 2003-04 the Club once again reached the First Round Proper of the FA Cup, losing out by the only goal of the game at Milton Keynes and at the end of that season City were among 15 clubs from the Premier Division admitted to the newly formed Nationwide Football Conference North Division.

By the 2006-07 season the club was once again in financial difficulties and a shareholders committee was formed to run the affairs of the club. In order to survive it was decided to put the Club into Administration and although the Club finished bottom of the League with only one point, anyone who followed the Club at this difficult time would know how much the present set up owes to all involved, both on and off the pitch, in keeping the Club going. The Club reformed as Lancaster City FC Ltd and continued in the 2007-08 season after dropping two levels to the Unibond League First Division North where they finished in mid-table. The following year the Dolly Blues improved and were just three points short of that fifth and final play-off position and in 2009-10 a further improvement was made, in what was to be the last season of a 17 year Unibond League Sponsorship, with a second place finish that saw the Club in the play-offs. Having reached the play-off Final against Colwyn Bay, who had finished 21 points behind them in the League, City had the heartbreak of being beaten by the only goal of the game, a penalty two minutes from the end. The Club did win a Trophy with the League Fair Play Award but that was a scant reward for their efforts.

In 2010-11 City ended in 8th place but did win the President's Cup, defeating four sides from the top five, and retained the League Fair Play Award as well as winning the prestigious FA National Fair Play and Respect Award, representing clubs from Tiers 1 to 4. The club retained the League’s Fair Play award in 2011-12 but finished 3 points off the play offs and whilst the play-offs were tantalisingly close in Darren Peacock’s first season as manager in 2013-14, failing on goal difference, the addition of ex-England player Trevor Sinclair as coach didn’t achieve the success the Club so desperately craved and the managerial roundabout now sees Phil Brown, an old Club stalwart, in charge and in the process of a re-building programme.

A sign of things to come was the Club’s tremendous effort in holding Chorley to a draw in the 2015-16 LFA Challenge Trophy Final at Bolton, eventually losing 3-1 on penalties and the new management team used this as a springboard for the 2016-17 season which saw further success with an Evo-Stik Division 1 North league title and automatic promotion to the Premier Division. In addition the club also regained the League’s Fair Play award again after a break of two years, thus winning it for the fifth time in the last eight years. After gaining promotion to the Premier League the plan to consolidate in the Division for the 2017-18 finishing 17th assured we did just that, also for the second year running the Dolly Blues picked up The Presidents Trophy for Fair Play gaining the Highest points across all three Divisions

2018-19 Season didn’t get off to a good start for the Dolly Blues seeing us at the foot of the table early on and saw Phil Browns resignation, the search for a new Manager began, in the interim Craig Stanley and Matty Blinkhorn took control and gained our first points of the season, The Clubs thanks go to Craig and Matty for their contributions at a difficult time for City, October saw the appointment of Mark Fell as Manager and things started to change for the better, the team went on to finish 12th in the Premier Division and although Lancaster City didn’t win the Presidents Trophy for the third consecutive season we did win the Premier Divisions Fair Play award.

What can be said about the season that never was, as we all know Covid 19 ended the season on March 14th 2020 with the Dolly Blues finishing in a play-off position after a good season and who knows what would have happened is all speculation, so we now look forward to the new season and new challenges.

With the ’19-20 and ’20-21 season being declared Null and Void and curtailed there was not much to write about for the seasons that did not happen so we look forward to the new 2021-22 season with bated breath, Mark Fell and his backroom staff have worked hard over the pre-season on strengthening the Squad, and before the new season started we already have some silverware for the cabinet picking up the Lockstep Trophy and the long awaited (46 years in fact) Lancashire FA Trophy played at Leyland we now look forward to the 2021-22 season and beyond.