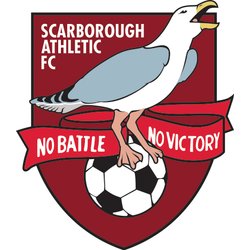 Scarborough Athletic have announced that Bailey Gooda has committed to the club until at least the end of the season.

Scarborough Athletic have announced that they have agreed to release Nathan Cartman from his contract with the club following discussions with the player, the board of directors and first team manager.

Scarborough Athletic have announced the signing of Luca Colville.

Scarborough Athletic have announced the departure of Lewis Turner.

Jono Greening has landed his goalkeeper target in Ryan Whitley for the Pitching In Northern Premier League 2021/22 season.

Scarborough Athletic have announced that trio Lewis Turner, Dylan Cogill and James Cadman have re-signed with the club.

Scarborough Athletic Football Club was formed on 25th June 2007 following the liquidation of Scarborough FC. The new club was set up by the Seadog Trust, a group of supporters who originally started the trust with the aim of gaining fan representation on the board of Scar-borough FC. However, as a result of the old club’s liquidation, the Seadog Trust moved quickly to ensure a football team continued to represent the town at the highest level possible. On 25th June 2007, Scarborough Athletic were accepted into the NCEL Division One for the 2007/08 season, and an agreement was reached for the club to use Bridlington’s Queens-gate Stadium as part of a ground share with no suitable stadium able to be used in Scar-borough.

The Club appointed the experienced Brian France as manager. The former manager of North Ferriby United brought with him his son Darren as his assistant. Brian began bringing in players from his former club, as well as some local players unearthed at an open trial held within days of the club’s formation.

The first game kicked off with a match against local side Edgehill at Hunmanby’s Sands Lane Ground that finished 0-0, before embarking on a friendly at Northallerton Town. The match finished 2-2, with Shaun Chadburn taking the honour of the club’s first ever goal.

The team’s first ever League match came in the NCEL Division One at Teversal on August 11th, 2007. Boro’ fans marked the occasion by dressing up in suits to show their status of Joint Owners of the club through their membership of the Seadog Trust. Dave Thompson entered himself into the history books as he netted the club’s first competitive goal, but a last-minute winner saw Teversal claim a 2-1 win.

The team’s first few weeks in existence saw its elimination from several cup competitions, coupled with inconsistent league form, highlights from the first season included an 8-0 thumping of Borrowash Victoria and the club winning through to the North Riding Senior Cup Semi-Final. The club finished the season in a respectable fifth place.

The 2008/09 season saw the club claim its first promotion and Championship, despite suffering a slow start to the league season. Boro’ proceeded on a tremendous run off form.

As well as the league, the club also progressed in the FA Vase, with victories over Birtley, Esh Winning, Sunderland Nissan and Blackstones, before unluckily losing to Bideford in the Fourth Round.

Promotion was achieved with a 2-1 win at Teversal on March 21st, with the championship secured a week later at home against Brighouse Town. Nearly 800 were in attendance to see the club lift the League Trophy after the final home against Leeds Carnegie.

Promotion to the NCEL Premier Division in such convincing fashion meant fans started the new season looking for the club to challenge for a second successive promotion. The season started badly with two consecutive defeats. However, the team regrouped and produced a run of 9 successive wins, which saw the team and its fans dreaming of more silverware, but a 4-3 loss at Parkgate was the start of a collapse in the team’s away form. The highlight of that season was a 13-0 win against Brodsworth.

2010/11 began with much promise, but a huge blow was suffered when manager Brian France was struck in the face with the ball at Liversedge, and later suffered a brain haemorrhage from the injury sustained. As the weeks went on it was clear Brian was going to be un-able to continue, and Paul Olsson took over as manager in November 2010. Results were up and down, and in March Olsson left the club by mutual consent. He was replaced by Rudy Funk.

Funk's first season in charge saw the team have a fairly successful season, but some inconsistent performances saw them always playing catch up to eventual Champions Retford United and rivals Bridlington Town, who finished ten and eleven points ahead respectively.

The 2012/13 season though will certainly live long in the memory of many Boro’ fans as they finally clinched the NCEL title and promotion to the EVO-STIK Northern League. Aided by new additions Peter Davidson, Andy Milne, Jimmy Beadle and Paddy Miller, the club enjoyed a terrific season suffering only two defeats all season.

Despite this they were pushed all the way by Brighouse Town, who matched them step for step. It all boiled down to a promotion decider between the two clubs in April when more than 800 Boro’ fans travelled to the Dual Seal Stadium. Despite a nervous first half, Boro's experience finally paid dividends and a goal apiece from Ryan Blott and Beadle saw them virtually over the line, promotion was achieved the following week with a home victory against Retford United.

The clubs first venture into the EVO-STIK Northern League meant an upheaval of the squad with no fewer than eleven new players signing on, including the major coup of Gary Bradshaw and Paul Foot. The club was controversially placed in the Southern Section and their opening fixture was an away game at Kidsgrove Athletic. Despite having three players sent-off they hung on for a creditable 1-1 draw. The new players took time to bed in and the team struggled in the early part of the season, but by October they had found their feet and slowly climbed the table with some impressive displays. The also enjoyed an excellent run in the FA Trophy that ended at Conference North side AFC Telford United. In an up and down sort of a season the club managed a creditable 7th place.

The following season the club was moved to the Northern section of NPL, and after a decent start to the campaign the side became very inconsistent. In November 2014 Rudy Funk re-signed as manager of the club. Initially assistants Paul Foot and Bryan Hughes were placed in temporary charge before being installed as Joint Managers on a permanent basis in December 2014. The pair led Boro’ to a sixth-place finish in the 2014/15 season and were kept on for the following season.

After an excellent start in 2015/16, by Christmas Boro’ had gone on a wretched run and were slipping further down the league table. Hughes and Foot left the club by mutual consent just before Christmas, with Matty Bloor and Chris Bolder taking temporary charge for the festive fixtures.

In January 2016, Steve Kittrick was appointed as manager and steered his new side away from relegation, with Boro’ finishing 20th in the final table. The highlight of the season came at the end as Boro’ battled through to the Integro Doodson League Cup Final against Marine. Despite taking the lead through Callum Robinson, a red card for Dean Lisles and two late goals turned the game on its head and meant Boro’ finished as runners-ups.

Steve Kittrick began his first full season in charge with high hopes, and after a stuttering start Boro’ gradually got going and were around the Play-off places for most of the season. A slump before Christmas was halted by a 3-2 win over Tadcaster Albion on Boxing Day, but it seemed a place in the Play-offs would be a step too far. The club was rocked by the sudden death of Chairman Dave Holland in February, and it seemed the season on the pitch was flat lining.

However, a remarkable finish to the season, winning the last eight games saw the Seadogs sneak into third place and a Play-off place. Hopes were dashed with a 3-1 defeat to Ossett Town in the Semi-Finals, but a strong finish and the return home to Scarborough at the Flamingo Land Stadium has led to high expectations of a strong season ahead. The new stadium was opened on 15 July 2017 against a Sheffield United XI in front of a capacity crowd.

The club’s first season back home was a successful one, achieving promotion to the Evo-Stik Premier Division after finishing second to South Shields in Evo-Stik North during 2017/18. A good run in the FA Cup, losing out to league rivals and eventual promotion side, Hyde, in the fourth qualifying round was hard to take. This led to a short downturn in fortunes until the club made a landmark signing in the name of James Walshaw. Having struggled for goals up to November, Walshaw bagged himself 19 in a Scarborough shirt and Michael Coulson finished the season with 43 in all competitions. Loanee Max Wright finished the season in double figures before being offered a contract with his hometown club, Grimsby Town. Fellow loanees Bailey Gooda and Tom White helped the promotion push from December onwards, sealing promotion away at Colne in front of a large travelling support.

The 2018/19 was the club’s first season in the Northern Premier League Premier Division, which saw the seadogs enjoy a County Cup success, beating Marske United. However, during the season after an excellent start, form started to slump, and Steve Kittrick was sacked in March 2019. John Deacey was later appointed after over 40 applicants applied for the top job. Deacey however lasted only a few months before also facing the same fate after a poor start to the season following a number of injuries.

In November 2019, Darren Kelly was appointed and quickly built a rapport with the supporters. Darren endured a difficult time with the pandemic, however, he brought a number of changes to the club during his short time with the club. Darren was however unable to complete a full season at the club and subsequently left the club in May 2021 to take up a role as Director of Football at Newport County in the Football League.

The week following Darren’s resignation, Champions League winner, Jonathan Greening was appointed, bringing in Michael Ingham as his Assistant. The squad is relatively un-changed, with a few new additions planned and expected.