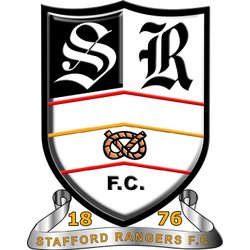 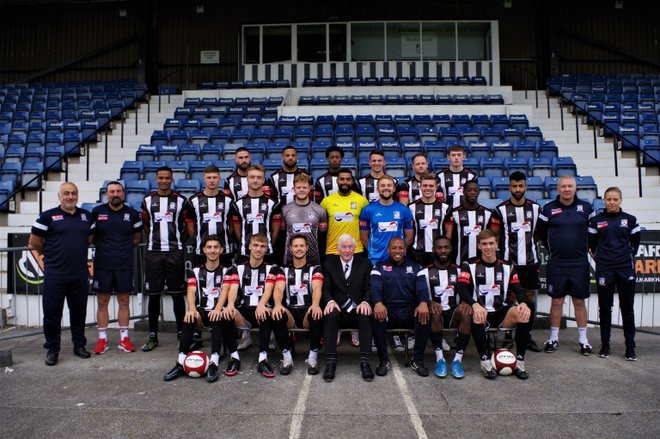 Stafford Rangers first team manager Matt Hill and assistant manager Dale Belford have signed new deals to remain at the club until the end of the 2023/24 Season.

Stafford Rangers have confirmed three new signings, while one heads out on dual-registration.

Stafford Rangers have announced the departure of Josh Endall, while Tom Carr heads out on dual-registration.

Stafford Rangers have announced the signing of Tyrone Ofori for the Pitching In Northern Premier League 2021/22 season.

Rangers struggled in the newly formed Alliance Premier League and were relegated to the NPL in 1983.In 1985, Manager Ron Reid led the club to a record 20 games unbeaten and the NPL title and followed this with the Bob Lord Trophy the following season.

Rangers went on to record their best ever Conference finish (6th) in 1988 but life was largely a fight against relegation. This, despite the likes of future internationals Stan Collymore (England) and Paul Devlin (Scotland) making their names at Rangers.

Dennis Booth matched the 6th place finish in1993 and also took the club to the 2nd Round of the FA Cup with victory over Lincoln City before leaving for Bristol Rovers.

Rangers were relegated from the Conference in 1995, and then suffered a second consecutive relegation after picking up just two points from their opening 19 games in the Southern Premier League.

Rangers bounced back in 1999/2000 as Ian Painter led the club to the Dr Marten’s League Western Division title, setting a new club record with a 23 game unbeaten run in the process.

in 2001/02 Phil Robinson replaced Painter as manager and the club finished Southern Premier runners up in his first year (2002/03) as well as winning the Staffs Senior Cup and taking the club to the 1st Round of the FA Cup for the first time in a decade.

The following season, Rangers finished 3rd and qualified for the newly formed Conference North.After topping the table for much of the 2005/06 season, Rangers eventually finished runners up but won promotion back to the non-league top flight after a play-off victory over Droylsden.

Rangers’ stay In the Conference Premier lasted just two seasons before they were relegated back to Conference North, but the cost of those two years lingered and once more the future of the club was in doubt.

The appointment of big name managers such as Steve Bull, Tim Flowers and Matt Elliott failed to improve fortunes and Rangers dropped to the third tier of the pyramid, returning to the NPL for 2011/12.

Greg Clowes then took charge, but two more disappointing years followed before a disastrous start to the 2013/14 season ended Clowes’ reign. Another big name appointment, Andy Mutch, was another failure and his replacement, Graham Heathcote, couldn’t turn results around.

Neil Kitching took the managerial reins for the start of the 2014/15 season following his move from Rushall Olympic and major changes were also made at Boardroom level.

However the season started badly with the untimely death of Secretary and Director Mike Hughes who had guided the club through difficult times.

Rangers narrowly missed out on the play-offs on goal difference but did win the Staffordshire Senior Cup beating Leek Town in the final at Vale Park and on a positive note gates were up by 25%.

The club was now moving forward with new Chairman John Bromley leading the way as he set about renovating the Social Club, which for many years has provided funding for the football section.

In 2015/16, Neil Kitching and his management staff Nick Amos and Martin Prentice led the ‘Boro to the Evo-Stik First Division South title, which went right to the wire with a draw away to Coalville Town. Gates were again up, and the club had turned the corner both on and off the field of play.

In 2016/17, Rangers consolidated their position in the Evo-Stik Norther Premier League finishing a creditable 13th The season was marred by passing of the club’s patron Roly Tonge, who for many years had been instrumental in keeping the club afloat. A mention here also of the demise of President Leon Douglas and Director Cliff Went. These gentlemen were for many years the backbone of Stafford Rangers Football Club.

Rangers fared a little better in 2017/18 finishing just one place above that of the previous season. A win against local rivals Hednesford Town in the Staffs Senior Cup final brought the season to an end. Off the field the excellent work continued both in the Social Club and in the stadium.

The start of the 2018/19 brought about another managerial change as long time Rangers favourite Steve Burr moved into the hot seat. The FA’s re-structuring of the non-league pyramid also brought many changes in the playing squad.

Rangers struggled however in the lower end of the table and at the start of 2019, Burr resigned and was replaced by his two assistants Alex Meechan and Andy Fearn as joint managers. The pair worked wonders and the team moved away from the relegation positions.

In October 2018 Rangers were saddened by the passing of their President and former Chairman Jon Downing. Jon had suffered for two years from motor neurone disease. Jon had been an inspirational figure at the club for many years.

On 14 December 2018 a fan based project to build a stand at the Town End of the stadium came to fruition. The Shed End opening was celebrated with a 4-1 win over Hednesford Town.

Meechan and Fearn were retained as joint Managers for the 2019/20 season and built what was on paper a strong squad. However as the season progressed an unprecedented succession of injuries hampered Rangers progress. In March 2020 football was halted by the Corona Virus Pandemic. At this time Rangers were at the foot of the table and looked odds on for relegation.

However, the Northern Premier League, with a resumption looking very unlikely, decided to make the league null and void with no promotions or relegation. A decision which certainly came to Rangers rescue. The Managerial duo of Meechan and Fearn were relieved of their duties

The following season 2020/21 the league season was again declared null and void with Rangers again at the foot of the table. New Manager Jody Banim’s reign was short lived, and he left the club. Former assistant Manager Andy Fearn joined the Board of Directors in a new role of Director of Football.

This season, 2021/21, former player, Matty Hill, has taken over as manager with Dale Belford as his assistant. Currently the duo are building a new squad and there are early indications for a better season.