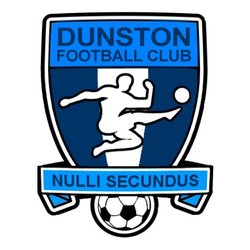 Long-serving Dunston legend, a former player, manager and chairman of the club, John Thompson has won The Spirit of Grassroots Award for 2021.

Dunston have confirmed the signing of forward Luke Porritt.

The Club first saw light of day in 1975 as a humble works outfit. Long-serving Club stalwart, John Thompson, along with some of his fellow workmates at Her Majesty’s Stationery Office Gateshead, decided to form a football team and joined the Newcastle City Amateur League playing at the Civil Service Sports Ground, Longbenton, Newcastle.

Early success inspired John to develop the Club and it moved to a new base, The Bay Horse public house in Whickham. The Club name was changed to Whickham Sports FC. Playing on a public parks pitch in Dunston, the Club entered the Northern Amateur League. Numerous successes were achieved at this level including League Championships and League Cup wins.

In 1980 the Club joined the Northern Combination League. Further League and Cup triumphs followed and a move to a base nearer the home ground seemed logical. The Club moved to a new base at the Dunston Mechanics Social Club and became known as Dunston Mechanics F.C. As the club progressed, land in the locality was leased from Gateshead MBC and the management committee began to develop the present ground.

At this stage an approach was made to the Federation Brewery for sponsorship to assist in the progress of the Club. When they kindly agreed to become the Club’s main sponsors, the name was changed to Dunston Federation Brewery F.C. After finishing as League Champions and League Cup Winners in 1987, the Club left the Northern Combination League and joined the Wearside League. Following a period of four seasons in the Wearside League – being League Champions twice and League Cup Winners once – the club felt a need to seek new opportunities and an application was made to join the prestigious Northern Football League.

During their time in the Wearside League, the club had made considerable improvements to Federation Park with progress to a higher status of football in mind, and their application to join the Northern League was successful. The Club had now realised one of its main ambitions and so entered the National Pyramid of Non-League Football.

In its second season in the Northern League, the Club won the Second Division Title and was promoted to the First Division. That season also saw the Club reach the last eight of the national FA Vase competition.

The Club was now an established Northern League Club having won the League Challenge Cup three years in succession from 1998 to 2000. Dunston also won the J. R. Cleator Cup in 1999/2000 and 2000/2001. Season 2003/2004 was one to remember when the club won the Northern League Championship for the first time and also lifted the League Challenge Cup. They also reached the final qualifying round of the F.A. Cup – the furthest they have ever reached in that competition.

After such a magnificent season in 2003/2004, the club went one better the following season when they repeated the Northern League Championship and Challenge Cup Double and also lifted the J. R. Cleator Cup once more.

In 2009, having been without a main sponsor for the previous three seasons, Mr. Shaun Sadler of UTS Engineering kindly agreed to provide a generous sponsorship package and it was agreed that the Club be known as Dunston UTS Football Club. The name of the ground was changed from Federation Park to The UTS Stadium.

The Club enjoyed a momentous season in 2011/2012 when finishing third in the Northern League and earning a visit to Wembley. After a memorable run in the FA Vase, the side went on to lift the trophy with a superb 2-0 victory over West Auckland Town.

After a few barren years, the Club sprang back to life again at the end of the 2017/2018 season when finishing as Runners-Up in the Durham Challenge Cup Final and going one better with victory in the Brooks Mileson Memorial League Cup Final. Building on the new-found momentum, Dunston continued in the same vein in the following season with a great run in the FA Cup, going out in the final Qualifying Round to National League neighbours Gateshead in front of a record crowd of 2,525 at the UTS Stadium. The Club finished the 2018/2019 season as convincing Champions of the Northern League First Division, seventeen points ahead of their nearest rivals. Promotion ensued to the BetVictor Northern Premier North West Division but FA Regulations dictated that the “Club Playing Name” must not include any reference to a sponsor so the “UTS” was reluctantly dropped from the Club Title before the new season commenced. Shaun Sadler showed remarkable understanding of the situation and agreed to continue his wonderful sponsorship of the Club. With the aid of a generaous grant from the FSIF, improvements were completed to bring the ground up to NPL standards.

The step up proved a bit more difficult than expected against tougher opponents in the NPL North West Division. Some promising early results were tempered by some set-backs and it wasn’t until the turn of the year that the team achieved any great consistancy. The early cancellation of League proceedings in March 2020 saw the Club finish in mid-table. After yet another early curtailment last season, Dunston have added to the playing squad in the hope of some success in the newly formed NPL East Division for the 2021/2022 season.

Over the years the Club has always recognised that success on the field must be coupled with hard work behind the scenes. The efforts of the management committee and ground staff at The UTS Stadium have ensured that the ground is a credit to the Club. Many of the back room staff at the Club have been involved since it was founded in 1975. It’s a tribute to their commitment and hard work that the Club has become one of the most successful and respected on the North East non-league scene.