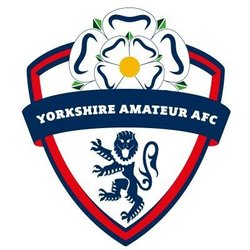 The club was established by Kolin Robertson in November 1918. They were founder members of the Yorkshire League in 1920 but left after four seasons.

The club originally played at Elland Road, which had become available after Leeds City folded. However, in 1920 they sold the lease on the ground to Leeds United for £250. After two years playing at several different grounds, including a groundshare with Harrogate Town, the club relocated to Bracken Edge in 1922 where they remain to this day.

The club returned to the league in 1930 and were runners-up in Section B of the Subsidiary Competition in 1930–31, also winning the West Riding Challenge Cup. The following season saw them reach the first round of the FA Cup for the first time, losing 3–1 at home to Third Division North side Carlisle United. They also reached the semi-finals of the FA Amateur Cup, losing 2–1 to Marine at Filbert Street, and won the league's Second Competition, before losing to First Competition winners Huddersfield Town 'A' in a championship decider. In 1932–33 they won the league's inaugural League Cup, before winning the West Riding Challenge Cup again in 1933–34 and 1944–45.

Division Three was abolished in 1986, with Yorkshire Amateur moved up to Division Two. Division Two was subsequently disbanded in 1991, leading to the club moving up to Division One. They were winners of the league's Wilkinson Sword Trophy in 1998–99, and remained in Division One until finishing as runners-up in 2017–18, which earned them promotion to the Premier Division under the helm of current managers Neil Sibson and Craig Ogilvie.

After the 2020–21 season was curtailed due to the COVID-19 pandemic, the club were promoted to the East Division of the Northern Premier League