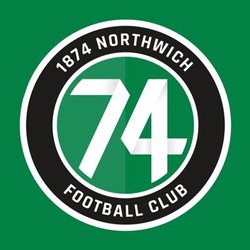 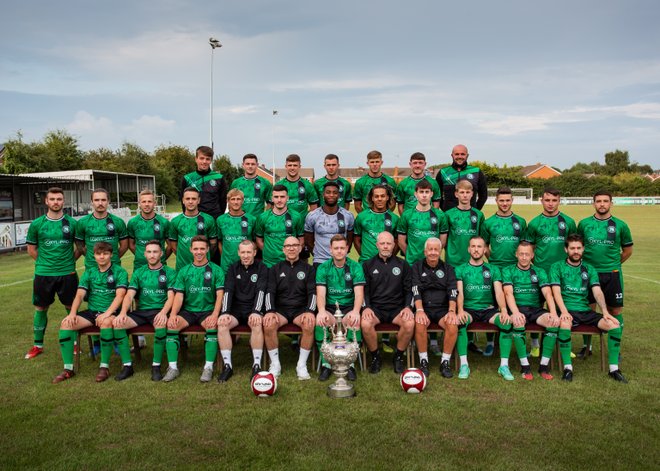 1874 Northwich have announced that Jake Parker has signed a one-year deal with the club.

Whilst fans of clubs with longer and supposedly more illustrious histories might not believe this, there are many really great things about supporting a club as young as 1874!

One of these is that in each and every season of our existence, there has always been at least one event that has created a new record and helped to shape our short, but so far quite amazing history!

So, when it comes to summing up our history, it really is a case of where do we start and what do we include or leave out?

Some might say - and we would find it difficult to argue against this point - that the principal landmark occurred on the 15 November 2012 when disillusioned members of the Northwich Victoria Supporters Trust voted overwhelmingly to create a new club. However, others might make the case for the evening of Wednesday 10 July 2013, for this was when ‘74 played their first ever game against local side Lostock Gralam.

On that warm, balmy evening, just short of 400 fans turned out to see the first game of a club that they had decided to create, was something different, new and, most importantly, something that they had a direct say in. In short, a true fans’ run club

Prior to that night a massive amount of hard work had been put in to ensure that the club could kick-off, as planned at the start of the 2013/14 season. This included

• Our successful application to join the North West Counties Football League
• The appointment of our first ‘Gaffer’, Ian Street
• The signing our first ground sharing agreement with Winsford United

The level of support shown for the new club wasn’t a flash in the pan either as during our first season 1874’s average home league attendance was 320 – which put the club in the top 100 best supported clubs in non-league football.

As it happened, ’74 finished one place outside the two promotion spots, but due to the sudden and unfortunate demise of second-placed Formby, the club were asked whether we would like to take up the vacant spot in the Premier Division – an offer that was readily accepted!

So, season two presented ’74 with the opportunity to create even more records – and boy, did we take this chance with both hands! Along the way several new milestones were achieved, including our first ever appearance in the FA Cup and our highest league placing of 3rd in the NWCFL Premier Division.

The 2015/16 season proved to be a steady campaign in the league with an eventual finishing spot of 4th, but it ended in a truly memorable manner when Ian Street’s side outclassed local rivals and Step 3 outfit Witton Albion by a 3-0 score-line on their own turf to lift the Mid Cheshire District Cup for the first time. This Trophy was retained the following campaign with a 1-0 win over rivals Northwich Vics, but by this time the management of the club had passed into the hands of Paul Bowyer and Wayne Goodison – both of whom had been part of Ian Street’s back-room team.

The impact of the new management team was truly remarkable, as the 2017/18 season proved to be far and away the most exciting and memorable in the short history of 1874, during which the ‘Go-Bo’ Green Army.

• Defeated National League North and former FA Trophy winners North Ferriby in the FA Cup
• Finally exited the competition on penalties in a 3rd Qualifying Round replay
• Reached the semi-finals of the FA Vase, only for eventual winners Thatcham Town to deny ‘74 a trip to Wembley by triumphing 4-2 on aggregate.
• Took hundreds of fans to away ties at Leighton and Thatcham
• Recorded a record home attendance of 1,674 in the second leg of the semi-final against the Wiltshire outfit
• Ended the season by playing a mammoth 26 games in just 57 days and 69 games overall

Given the successes of the ‘17/18 campaign, it would have been astonishing if ’74 had been able to equal the achievements of the previous season. After all, even the top clubs in the country struggle to repeat their immediate past triumphs – so why should this not be true for ’74?

So, a final position of 10th – the lowest that the club had finished in since being promoted to the Premier Division– did seem to suggest a further decline in the clubs’ fortunes.

But that would be completely wrong ....

You see, 1874’s final standing was hugely influenced by poor start to the season in which the loss of key players from the ‘17/18 campaign - allied to a cruel run of injuries to many of the clubs’ key creative and attacking players - resulted in a somewhat disjointed first few months of the season.

The result of this was that a realistic title charge was not on the cards and - equally disappointing - ’74 also suffered early exits in both the FA Cup and Vase. Another factor that we probably didn’t fully appreciate at the time was the impact that the untimely death in December 2017 of our inspirational and dearly loved Chairman Paul Stockton had on the club.

Given these issues, it might have been easy for the club to let the season drift out to a below par end. However, the management team, Board and supporters were not prepared to let this happen and collectively they banded together and as a result in the last third of the season the side won 10 of its remaining 16 games, drawing 3 and losing 3.

Of this sequence, the most memorable and important came on the afternoon of Saturday 4 May 2019 when ’74 lifted their first major piece of silverware when an 88th minute goal from Aaron Smith proved enough to give The Greens a thoroughly deserved 1-0 victory over league champions City of Liverpool FC in the final of the NWCFL League Cup at Moss Lane, home of Altrincham FC, a game that was witnessed by over 1,000 fans.

The joyous scenes that followed the final whistle will live forever in the memories of all the 500+ ’74 fans that were lucky to be there and further vindicated the decision that they had taken just over 6 years earlier to form a new club. This cup win proved to be a springboard for the club as from the very outset of the 2019/20 season it was clear that ’74 would be one of the main contenders for the NWCFL title.

Another good FA Cup run – which was halted at the 2nd Qualifying Round by an admittedly fortunate Whitby Town side – was the precursor to an astonishing league campaign that included a 15-game unbeaten league run – another club record. But it wasn’t just the results that were impressive, it was the swash-buckling, stylish passing and pressing style of play in which ’74 played the game that brought them so many plaudits and admiration from other clubs and commentators from all quarters. But in addition to their verve and panache, the side also possessed a steely, never-say-die, attitude that that gained them several precious points from seemingly difficult positions. This left ’74 in the box seat at the head of the league with 9 games left and 8 points ahead of second placed Rylands with a game in hand.

So, if there was ever a bunch of players and back-room staff that deserved to end a season celebrating a league title win, then it ought to have been our fabulous, wonderful team who represent our brilliant little club. But alas, and for entirely understandable reasons, this was not to be. For as we all now know, the COVID 19 outbreak resulted in a sudden cessation to grassroots football and, heartbreakingly, the players, officials and fans alike were denied seeing the league trophy being paraded around Townfield.

However, although we didn’t know it at the time, ‘74’s elevation to Step 4 was to be deferred as opposed to being denied as due to the re-organisation of the National League Pyramid, ‘74 became eligible for promotion to the newly created Northern Premier League West! And to celebrate this elevation, on 24 July 2021 the Greens became the first club in the 40+ year history of the competition to retain the NWCFL League Cup by convincingly defeating Runcorn Town 6-3 in the much delayed 2019/20 final.

So, the coming season is undoubtedly going to be one of the sternest tests we’ve had since starting off on this exciting journey, but it is one that all of us are relishing! But that is enough about what happens on the pitch with ’74.

You see, another unique thing about ’74 is that it is not all about what happens on the 6,000 square metres of turf.

For instance, both supporters and players regularly meet together at well attended and organised social events, including race nights, beer festivals, bowls competitions, cricket matches, fans forums, Christmas and end of year presentation dinners – all of which have cemented the special bond our club has between its fans, players, management and Directors.

In addition, from the very start, the club sought to develop, build and nurture relationships with the local business community. Our success in this sphere can be gauged by the fact that well respected local company Britannia Carpets has been a key sponsor during for each year of our existence and they have now been joined by another locally based ‘Blue-Chip’ company Oxyl-Pro.

Likewise, for the past 6 years we’ve also forged excellent relationships with our chosen charity partners, which have included the Winsford-based Neuromuscular Centre, St Luke’s Hospice and children’s hospice ‘The Joshua Tree’. In addition, regular collections have also taken place for local food banks, homeless people shelters, The Samaritans, Armed Services veterans, and a myriad of other deserving causes as well as attendance at community events.

The partnerships we have forged with the voluntary sector are yet another example of how 1874 is demonstrating its commitment to be a ‘community’ club in terms of actions rather than words.

The 2014/15 season also saw the club run an U21 side and since then several of their number have now progress to the First-team squad. More recently, 1874 have fielded sides at junior level and our plan is build on the establishment of this team as a stepping stone towards the creation of other sides covering all age groups, gender, and abilities.

Mention of all age groups and abilities reminds us that, along with the Cheshire FA, ’74 have also played a major role in establishing local ‘walking football’ sessions each week which have proved to be hugely popular with the ‘more mature’ folks of Mid-Cheshire, most of whom might had thought that their playing days were well behind them!

2019 was also a landmark year off the field as, for the first time, 1874 finally played within the boundary of the town of Northwich having signed a 2 year agreement to share Barnton’s Townfield Lane stadium. A huge amount of work has been undertaken since this deal was signed to further improve the facilities for players, officials and supporters alike and by doing so to enhance the match-day experience for all - as well as meeting the ground-grading requirements that are necessary for promotion to Step 4.

But any progress that we may make will be achieved in a responsible and sustainable manner. Indeed, one of our main principles is that we will not jeopardise the long-term interests of the club by spending money just in order to ensure success on the pitch.

So you could say that Inclusivity, Openness, Community and Sustainability is our USP.

But allied to this we also want to have success on and off the pitch and – as importantly - lots of fun!

And in our first eight years, we think that we’ve achieved all of these aims beyond our wildest dreams!