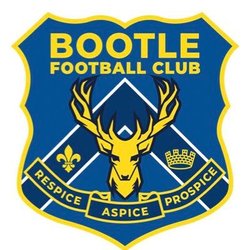 Bootle manager Brian Richardson says the play-offs is their target next season.

Bootle have appointed Brian Richardson as their new manager.

Bootle have boosted their squad with the signings of Craig Ellison and Jay Roberts.

Bootle have announced that first team manager Joe Doran has resigned from his position with immediate effect.

The original Bootle FC were formed in 1880 and played adjacent to Bootle Cricket Club, on Hawthorne Road. The club were Everton FC’s main rivals and competed with Everton for the prestigious place in the newly formed Football League. Because only one club per area were permitted to join, Bootle narrowly lost out, despite the fact that in the run up to the decision Everton were banned from both the FA Cup and the Liverpool Senior Cup the previous year.

However Bootle lost out and in 1889–90 Bootle became founder members of the Football Alliance, which became the newly formed Football League Second Division. That season was the most successful as the club finished league runners-up and reached the quarter-finals of the FA Cup, losing to Blackburn Rovers.

When the Alliance merged with the Football League in 1892, Bootle became founder members of the new Second Division. However, despite finishing in a respectable 8th place, the club dropped out after one season due to ongoing financial problems. Ironically a new local club, Liverpool, took Bootle’s place in the Second Division.

The possible resurrection of a Bootle team became a distinct probability in August 1947 when local councillors identified the popularity and talent on show in the ‘Bootle JOC’ league and knew the town was big enough to be put back on the football map with its own team again. For years now it had been an exporter of its many players to other clubs, both professional and semi-professional.

The promise of sponsorship money from local businesses brought great optimism and the issue of one shilling shares further boosted club finances. After local residents were assured that the ground at Bootle Stadium (Maguire Avenue) would not be used solely as a football ground, an application to join the Lancashire Combination for the 1948-49 season was made and accepted. Club colours even posed a problem, red or blue were dismissed for fear of showing favour to either of the ‘big two’ so it was agreed that, as the original Bootle FC wore white shorts, this colour would be adopted. Players mostly came from the local league and surrounding clubs, however one player that Bootle overlooked was a tall, blonde, ex-prisoner- of-war German, Bert Trautman.

Trautman, then living in Huyton, trained with Bootle at the stadium for several weeks but, with the area taking such a heavy pounding during the war, it was decided not to tempt any local bitterness and he was allowed to join St Helens Town and of course moved on to FA Cup and Manchester City folklore.

They kicked off their new campaign in 1948 against Barnoldswick and district. The league was won at the first attempt. However, Bootle struggled in the top-flight and after several tough seasons and also a change in Council priorities they withdrew from the league and folded during the 1953–54 campaign.

In 1953, the current club was formed as Langton with Frank Doran Senior being one of the founding members. The club played in the various local Bootle leagues. After a very successful spell in the Liverpool County Combination – winning the leagues and cups on various occasions the club requested to change its name to the latest incarnation of Bootle FC. This was accepted in 1973 and a year later ‘The Bucks’ joined the Lancashire Combination.

However, despite finishing 6th in 2002, the club dropped into the Liverpool County Combination as Bucks Park on Copy Lane closed its doors for the final time. In 2006 the club, with a new ground on Vesty Road, Bootle were elected back into Division 2 of the North West Counties League. In 2009 Bootle won promotion to the NWCFL Premier Division and also won the Championship. In 2009/10, the first season back in the NWCFL Premier Division Bootle finished 3rd. They equalled the 3rd place again in 2012. In 2016-17 they finished runner-up which is their highest placing in the NWCFL.

In 2018-19 the Bucks went on an amazing 20 game winning run that saw us in the driving seat to get promoted on the final day of the season with one more win. However that win was one too many and the club agonisingly missed out after a 1-1 draw, and so once again finished runners-up.

Everyone associated with the club was left shocked and saddened in January following the sad passing of our President, Frank Doran Senior.

Anyone involved with football both locally and across the North West would have known Frank, or Mr Bootle as he was affectionately known, for his booming voice, quick wit and his extensive knowledge and love of football.

Frank was a Docker, but more importantly for him, a footballer who was part of the 1954 Langton FC team that became the latest incarnation of Bootle FC. It was Frank who drove the club forward, as player, manager, secretary, chairman, groundsman - you name it - and latterly president of the club.

He would be seen every day up at both Bucks Park, on Copy Lane, and more recently at Vesty Road doing one job or another at the club, and that continued right up until December when the latest lockdown happened. Frank’s memory will last forever in the town of Bootle, and in the hearts of everyone who knew him.

In May of this year, the club’s promotion to the Northern Premier League Division 1 West was confirmed by the Football Association.

This is now the highest level that Bootle FC has competed at since we reformed in 1954 and is a testament to the work started by Frank Doran Snr and carried on today by Joe Doran.

We now feel we have got all the foundations in place for the club to keep going on this journey. Our fan base is increasing year on year, we own one of the best pitches in Non-League football, our ground and facilities have improved considerably in the last few years, we are developing our youth teams, and we are forever increasing our presence in the local community.