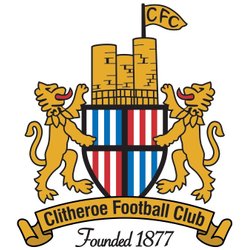 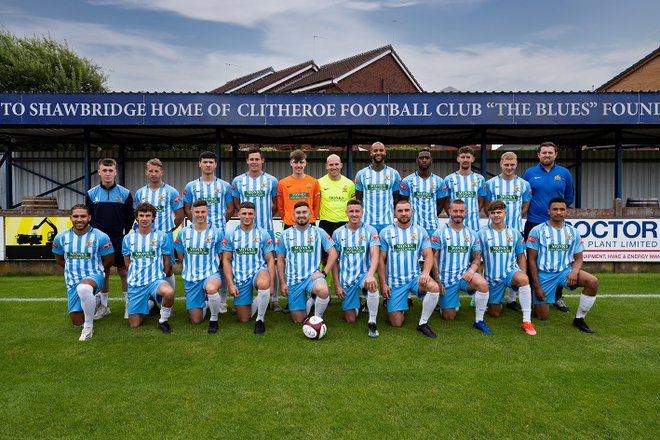 Clitheroe have announced the signing of Max Cane.

Clitheroe FC’s Lads United initiative is providing ‘a real boost’ to the physical and mental wellbeing of its participants, according to vice-chairman Andrew Jackson.

Clitheroe have confirmed senior players Billy Priestley and Gary Stopforth will take charge of the club on an interim basis.

David Lynch has stood down as manager of Clitheroe, the club has confirmed.

The club starts its 18th season in the Northern Premier League at Level 4 of the non-league pyramid. Under the chairmanship of Stewart Fort, it is looking to build on the continuing transformation of the club and to seek promotion to the next level, or at the very least to secure a place in the play-offs for the first time.

The club was formed as Clitheroe Central in 1877 at the Swan Hotel in Castle Street by local businessmen. After playing in local leagues, the club joined the Lancashire Combination in 1903 and dropped Central from their name. Aside from breaks during the First and Second World Wars, the club continued to play in the Combination until the end of the 1981-82 season, when it combined with the Cheshire League to become the North West Counties League.

For the first 100 years of Clitheroe FC’s existence, a Lancashire Junior Cup win in 1893, the Lancashire Combination Cup in 1934-5 and the League Championship in 1979-80 all that the club had to show for its efforts. That was soon to change. Although Clitheroe were put into the Third Division of the NWCFL at its inception due to the state of the ground, there followed the most successful period in the club’s long history under the stewardship of Eric Whalley, subsequently manager and Chairman of Accrington Stanley FC. He assembled one of the best non-league sides in the North of England and won back to back Championships in the Third, Second and First divisions, as well as securing the Lancashire Cup for the first time in 50 years, thanks to a solitary strike from local lad Eric Geldard. This was all the more impressive when one considers that the Division 1 was effectively Level 3 in the non-league pyramid. Captained by Mick Ashcroft and containing extravagant talents such as John Taylor and Steve Mullen, possibly the best player ever to play for the Blues, Clitheroe regularly attracted bumper gates, with the championship winning season seeing three crowds over 1,000. Cracks started to appear when Whalley took over the manager’s seat at Accrington. To compound matters, the new Northern Premier Division 1 was formed, but a lack of floodlights meant the Blues could not take their rightful place and they found teams effectively leapfrogging them.

It was not until the mid-nineties that the Club recovered from this setback and started to fulfil its potential. It became a force in the NWCFL Division 1 again and also made itself known on the national FA Vase stage. Having been pipped to the title in 1994-95 by Bradford PA in controversial circumstances, the following season saw possibly the highlight of the club’s history when the Blues reached the Vase Final under the joint managership of Dennis Underwood and Gary Butcher after an epic two-legged semi Final win against Mangotsfield United of Bristol. 2,000 people were on Shawbridge for the second leg when a deflected goal saw the Blues home with seven minutes of extra time remaining. The Final pitted the Blues against a powerful Brigg side and a 3-0 reverse in front of 7,500 fans was a fair reflection of the play. In the close season, Clitheroe also received their record transfer fee, £45,000, from Crystal Palace for goalkeeper Carlo Nash.

The Wembley experience turned the Blues into a Vase side and a Quarter Final defeat against Tiverton in 1998-99 and a two leg reverse against Taunton in the 2000-01 semi-final gave the Blues national prominence. The Taunton season saw Clitheroe beat pre-tournament favourites Chippenham in the quarter final on their own patch before a two-legged semi against Taunton Town, which would never be forgotten. With the first leg away and the game only just surviving an absolute deluge, the Blues went in at half time 5-0 down and reduced to 10 men. There was not much good humour amongst the 150 travelling Blues over that cup of Bovril. No further goals followed, but with manager Dave Burgess throwing caution to the wind in the home second leg, the fans dared to dream with 3 goals for the home side in the first 15 minutes (including hitting the post) and the Taunton keeper being stretchered off, but in the end Clitheroe went down 8-4 on aggregate.

Dave Burgess stood down at the end of the season and central defender Lee Sculpher took over as player manager. In 2002-03, Clitheroe again finished as league runners up and lost to Mossley at Gigg Lane in the League Cup Final. Early cup exits the following season enabled the Blues to concentrate on the league and superb away form saw the Blues capture the 2003-04 league title on the final day of the season at Nantwich where Blues legend Neil Reynolds sparked bedlam when he thumped a 25 yarder into the top corner with six minutes of the season remaining.

High hopes accompanied Clitheroe’s first foray into the Unibond League in 2004-05, but the club never fully recovered from manager Lee Sculpher resigning after a handful of games into the new season. He was succeeded by Paul Byrom who then quit in the close season. Tommy Lawson was appointed manager for the 2005-06 season, but he was relieved of his duties in early 2006, to be replaced on a temporary basis by Mark Smitheringale. He too left before the 2006-07 season started and his assistant Chris Stammers stepped up to the plate before resigning after a 10-1 thumping away to Conference North Kettering in the FA Trophy in November 2006. The then chairman Carl Garner offered the job to Neil Reynolds and Pete Smith at the turn of 2007, before the latter took on the role in his own right at the end of the 2008-09 season. 2009-10 and 2010-11 saw Clitheroe finishing in eight and sixth respectively, the highest league placings in the club’s history. The end of the ’10-11 season also had a unique twist with Carl Garner stepping down as chairman after four years to replace Pete Smith as manager, in the process going unbeaten throughout April and taking the manager of the month prize. Garner was replaced in the role of chair by his long-standing deputy Anne Barker.

Despite the great end to the previous campaign, the 2011-12 season under Garner’s leadership was ultimately disappointing, although it had started so brightly with another manager of the month award. Form quickly tailed off and huge player turnover ensued, before Garner resigned and the managerial Vase duo of Burgess and Sculpher ensured survival on a temporary basis, having taken over with less than 10 games to go. Paul Moore, the ex-Leek Town and Warrington Town manager, took over the reins in 2012-13 and led Clitheroe to their record points total in Division 1 in finishing eighth, with the play-off push only ending over the final games of the season. However, the loss of key players in the close season led to a woeful start in 2013-14 and to an early exit from the FA Cup and Trophy, and the committee replaced Moore mid-season with ex-Blue Simon Garner.

Garner steadied the ship and Clitheroe finished the season in 17th position, with Garner setting his stall out in 2014-15 to create a more east Lancashire focussed team. A 13th place finish and an appearance at the Reebok in the Lancashire Trophy against Chorley represented good progress, whilst the 7th place in 2015-16 continued the good work, and the push for the play-offs only faltered in the final weeks. Following Garner’s resignation, the club moved quickly to appoint ex-Wales international Simon Haworth to the manager’s role. He moulded a team from scratch into genuine play-off contenders, only faltering in the penultimate game of the season to a 90th minute goal at rivals Colne. 2017-18 could not quite recapture these heights although both Kurt Willoughby and Alex Newby featured prominently in the league goal-scoring charts. When Howarth announced he was leaving, the club appointed former Warrington Town manager, Stuart Mellish. After an unhappy, short tenure, his assistant, former Ossett Town manager Lee Ashforth was handed the role six games into the season. Unfortunately, Clitheroe endured their worst season at this level and Ashforth’s tenure was brought to an end. Former Lancaster manager Phil Brown steadied the ship in the truncated 2019-20 season, with crowds averaging back over 350 and the Blues hovering around the play-off places. He left for personal reasons at the end of the season and the club appointed former Blue David Lynch as player manager for the 2020-21 season, who in turn left after a promising truncated season. Billy Priestley and Gary Stopforth have now been appointed as joint player managers for the coming season.