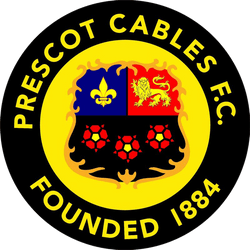 Prescot Cables have announced the signing of Macclesfield FC winger Leon Arnasalam on a dual registration deal until the end of the season.

Prescot Cables have announced the signing of Ethan Devine from City of Liverpool.

Prescot Football Club was formed in 1884 and the first organised game of Association Football ever played in Prescot took place against the second team of a local St Helens side, St Thomas. Prescot lost 3-1.

The 1887/88 season saw Prescot reach the Final of the Liverpool Junior Cup, losing 3-1 to Aintree Church. Two seasons later, The Watchmakers claimed the trophy, beating their own Second Team (Prescot Swifts) in the Final. Winning the Junior Cup earned the club the right to compete for the Liverpool Senior Cup and Prescot reached the Semi-Finals at the first attempt, taking on Everton. The Toffees would claim the Football League championship that season, so their 8-1 win over Prescot at Anfield was no disgrace. Prescot would reach the Semi-Finals again the following season, losing to Liverpool Caledonians.

Prescot joined the West Lancashire League in 1889; the competition changed its name to the Liverpool & District League after one season.

In 1895, Prescot won the Liverpool Senior Shield, beating Liverpool South End at Goodison Park in the Final. At the end of the 1894/95 season, the club joined the Lancashire Alliance and after two relatively successful seasons in this competition, took a further step up in 1897, joining the Lancashire Combination. However, Prescot struggled at the higher standard, finishing second-from-bottom. The club returned to the Lancashire Alliance, citing poor gate receipts and disproportionately high travelling expenses as the reason for their decision.

Prescot FC were Lancashire Alliance in Champions in 1899/1900 and then stepped up into the Lancashire League for 1901/02. A ground dispute resulted in Prescot dropping out of the league in 1902/03 and Prescot FC was dormant until 1906 when an athletic and football ground was opened at Hope Street the football club revived under the name Prescot Athletic FC.

Leagues were suspended in 1914 for the Great War and the post-war Prescot club dropped ‘Athletic’ from its name and joined the Lancashire Combination Liverpool Section. In their first season, 1918/19, Prescot finished runners-up to Tranmere Rovers but did not fare too well the following season and the club returned to the more locally-based Liverpool County Combination for the 1920/21 season and spent a further seven years in that league, winning the George Mahon Cup in 1923/24 and 1926/27.

Such was the standing of Prescot FC at this time that in February 1928 they were invited to replace Fleetwood in the Lancashire Combination, taking over the defunct club’s record and fulfilling their remaining fixtures. However, to do so, Prescot were required to sign an entirely new squad of players to play alongside the club’s Liverpool County Combination team, which continued to play until the end of the season.

1928 was a major milestone for the club as it was in this year that the local cable manufacturing giant, BICC, donated a magnificent 1,000-seater stand to the club. In what was clearly an early form of commercial sponsorship, the club’s name was changed to Prescot Cables prior to the 1928/29 season. At the same time, the club colours became black and amber to commemorate a bit of local industrial history, as the first successful insulated cable drawn at Prescot was covered with black and amber paper.

Having finished fourth in the Lancashire Combination in 1928/29, Prescot Cables applied for election to the Football League. The club received one vote, while York City gained sufficient votes to replace Ashington. Cables applied for election again in 1930, but this time did not secure a single vote in favour. In October 1931, Cables applied to the Football League to take over the fixtures of Wigan Borough, who had been forced to resign, mid-season, due to financial issues. They were rejected by the League Management Committee.

With the Liverpool Senior Cup now restricted to Football League clubs and the Senior Shield discontinued, the club won the Liverpool Challenge Cup in three consecutive seasons; 1927/28, 1928/29 and 1929/30. In the latter campaign Prescot also reached the Final of the Lancashire Combination Cup.

After the Second World War, Cables shared Hope Street with the 'A' Team of Liverpool FC and recruited a number of players released by the Football League club during this time. This helped Prescot to several cup successes at the end of the 1940s as the club won the Lancashire Combination Cup and Liverpool Challenge Cup, in addition to reaching the Final of the Liverpool Senior Medal.

In the early 1950s Cables yo-yo-ed between the First and Second Divisions of the Lancashire Combination, but the remainder of the decade represents the club's “Golden Age”. Prescot won the Liverpool Senior Non-League Cup in 1951/52, 1952/53, 1958/59 and 1960/61, in addition to reaching the Final in 1956/57. The stand donated to the club in 1928 was destroyed by fire in 1960 and was replaced by the magnificent structure that dominates the ground today.

Prescot Cables changed its name to Prescot Town in 1964 but the club struggled and in 1975, it was voted out of the Lancashire Combination. Prescot Town joined the Mid-Cheshire League and won it in 1976/77. In 1978/79 they returned to the Cheshire County League, in Division Two, after an absence of 42 years.

They finished third in that campaign after being deducted two points; the lost points cost the club second place and therefore promotion. The club did claim silverware, lifting the Liverpool Challenge Cup for the first time in three decades.

In 1980, the name of Prescot Cables was re-taken (only to be dropped again for five years between 1990 and 1995). In 1982, Cables became a member of the newly formed North West Counties League (NWCL) where they remained for 20 years. Prescot finished in the top ten in NWCL Division One in all but one season from 1990 and enjoyed several good runs in the FA Vase.

In 2001/02, the club had its most successful season for over two decades, winning the League Cup and finishing as Division One runners-up, narrowly missing out on promotion to the Northern Premier League Division One.

Prescot went one better in 2002/03 and finished as champions of the North West Counties League Division One to win promotion to the Northern Premier League Division One. Ground improvements were carried out at Hope Street to meet the relevant regulations and ensure that Prescot could take their place in the higher league.

For the season 2004/05, Prescot found themselves playing at the highest level in their history. Due to a suitable finishing position, and a re-organisation of the National League System, Prescot took their place in the Northern Premier League Premier Division.

As a result of a club being unable to fulfil their fixtures, and after the controversial intervention of the FA, Cables were elevated to fifth position in the final League Table. This gave Cables the opportunity to gain promotion to what is now called National League North, although defeat at Workington in the Play-off Semi-Final ended that dream - for now!

The 2005/06 season saw a new football committee being formed from the Supporters Club. The assets and liabilities of the old club, Prescot Cables, were transferred over to a new legal entity, Prescot Football Club Limited, which continued trading as Prescot Cables Football Club. The new company would subsequently be reconstituted as a Community Interest Company owned hundreds of supporters who each pay a small annual subscription in return for one share. On the pitch, the club produced another mid-table finish in the following season to avoid becoming involved in another non-league ‘shake-up’ that saw two regionalised First Divisions being created within the Northern Premier League ahead of the 2007/08 season.

That campaign was a more difficult one and during the club’s final match, Prescot was 15 minutes from relegation. Two late goals secured a win at Lincoln United and survival. Due to how closely contested the division had been, Cables eventually finished in thirteenth place!

A lacklustre 2008/09 season saw Prescot propping up the Premier Division. Manager Andy Gray departed for Burscough. He was replaced by Joe Gibiliru who managed to bring some much-needed stability to the club as the team finished in mid-table in 2009/10. However, a significant change in personnel meant that Cables initially struggled during the following season. This led to Gibiliru being relieved of his duties around the time of the ‘big freeze’ in December 2010 and assistant Dave Ridler took over. He managed to secure Cables’ Northern Premier League status for another season.

The 2011/12 season was a tale of five managers. Dave Ridler (who left for Australia in January 2012), Karl Bell and Karl Connolly all took charge for at least one match. Following the controversial departure of Shaun Reid to Warrington Town in March 2012, Joe Gibiliru took over for the remaining games.

The team and club regrouped after the Reid fiasco to finish the season strongly, defying the odds to remain part of the Northern Premier League.

David Powell was the new man in charge for the 2012/13 season and assembled a virtually brand-new squad, which led to inconsistency during the early months of the campaign.

The season was also disrupted by the condition of the playing surface and weather conditions forcing many postponements. When matches finally began in earnest in the New Year, Cables produced one of their most successful periods since the 2002/03 North West Counties League Championship season.

Circumstances arose that led to David Powell leaving the club ahead of the 2014/15 season. His replacement was Neil Prince, who kept the club in the Northern Premier League despite having limited resources at his disposal.

The 2015/16 campaign began disastrously, which led to Neil Prince being relieved of his duties. In came Andy Paxton who, with the same playing staff, managed to haul the team out of danger and finish the league season in their highest position for some time. Cables also reached the Final of the Liverpool Senior Cup.

Due to work commitments Andy Paxton had to step down from the role of First Team Manager in October 2017. The club moved swiftly to appoint Brian Richardson. Initially, the First Team struggled following the change of Manager, but an excellent second half of the season saw the club ease away from the relegation places and win the Liverpool Senior Cup for the first time, defeating Southport in the Final in front of more than 900 spectators.

Most of the squad remained with Cables for the 2018/19 campaign and was supplemented by some shrewd recruitment by Brian Richardson. Prescot spent virtually the entire campaign in the top six places and eventually finished fifth in the table, earning a place in the promotion Play-offs. Trafford were defeated in the Semi-Final, but a 1-0 defeat at Bamber Bridge in front of more than 1,600 spectators saw Prescot miss out on promotion. However, a 4-0 win at Marine ensured that Cables retained the Liverpool Senior Cup, ensuring that a memorable season ended with a suitable reward.

Richardson led Prescot to their fourth consecutive Liverpool Senior Cup Final, the 2018/19 decider seeing more than 1,200 spectators inside Hope Street for a game between Cables and Southport. There were no goals during the 90 minutes and Prescot’s grip on the trophy was finally ended after a penalty shoot-out. Cables also missed out on the promotion Play-offs by three points and at the end of the season, Brian Richardson joined FC United of Manchester as their assistant manager, taking several players with him.

The remainder of the club’s coaching staff stayed at Hope Street and Steve Pilling and Roy Grundy, who had both worked alongside Andy Paxton and Brian Richardson, were appointed as the new First Team Managers. They endured a frustrating and curtailed season in charge; a lack of goals meant that Prescot were marooned in mid-table, although the season was eventually declared ‘null and void’ following the spread of COVID-19 around the world. Pilling and Grundy left the club during the summer of 2020, with highly-rated young coach Craig Davies appointed as Cables’ new manager.