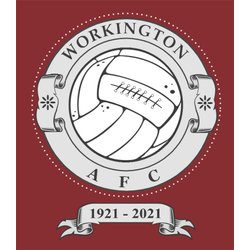 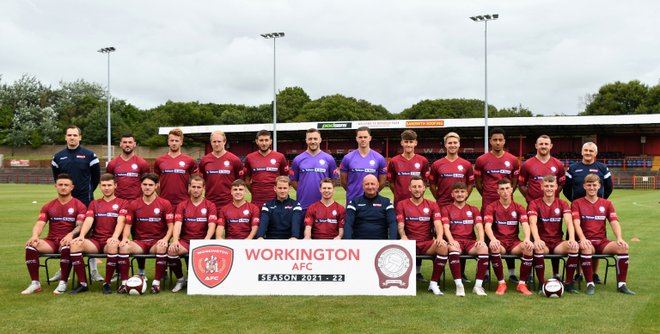 Workington captain Conor Tinnion has signed a new deal for next season, but two players have confirmed their exits.

Workington Grainger back at Workington  9 May 2022 By James Gordon

Workington have appointed Danny Grainger as the club’s new manager.

Workington have parted company with manager Chris Willcock following a disappointing end to the season.

A new initiative aimed at providing an outlet for youngsters in Workington has got off to a flying start with the aid of a vital cash injection.

Workington have appointed Chris Willcock as manager for the Pitching In Northern Premier League 2021/22 season.

Workington have announced the signing of Steven Rigg for the Pitching In Northern Premier League 2021/22 season.

The club was reformed in 1921 and, since then, has operated from the North Eastern League (25 seasons), Football League (26 seasons), Northern Premier League (34 seasons), North West Counties League (1 season) and National North (9 seasons).

When the club was reformed in 1921, they became members of the North Eastern League remaining there for thirty years.

They finished in the top half of the table more often than not – 5th on five occasions, 4th five times and runners-up after one memorable season. Goals were plentiful in those days, with the team netting over a century on eight occasions – including 147 at the end of the 1933-34 campaign. Billy Charlton was the leading scorer during the early thirties, netting 131 NEL goals in just three seasons.

The Club record victory (16-1 v. Chopwell Institute) was obtained in May, 1934 having overcome the same team 7-4, away, earlier in the season.

Elected to the Third Division North in 1951, their first Football League fixture was against Halifax Town but ended in a 3-1 defeat. A few days later, Chesterfield were welcomed as the first visitors to Borough Park with Reds emerging 3-1 victors.

It was a tough baptism, though, and Workington finished 24th, 23rd and 20th in their first three seasons with a record FL defeat (0-8 at Wrexham) inflicted upon them during the ’53-54 campaign.

Promotion from the Fourth Division in 1964 led to three seasons in the Third and, whilst there, Workington attained their highest FL placing – 5th position at the end of the ’65-66 campaign. Sadly, though, relegation was experienced twelve months later.

It had been a golden period in the club’s history and included a notable league double over Swansea Town (7-0 at home, 6-1 away), during the 1965-66 campaign.

They became famed League Cup fighters in the sixties, reaching the quarter finals in both 1964 and 1965 only to lose to West Ham United and Chelsea respectively. The run in ‘64-65 competition began with a 9-1 victory over Barrow and included a sensational 5-1 replay success over, then, top flight outfit Blackburn Rovers at Ewood Park – arguably the club’s finest ever result.

Messrs Shankly, Harvey and Furphy were revered during their time in the Borough Park hot-seat, but the stability was not quite the same thereafter and managers came and went on a regular basis. Brian Doyle and former player, George Aitken, did stay longer than most but once they left the club the future looked bleak

The decline set in during the mid-seventies and Workington’s final four seasons saw them finish 23rd, 23rd, 24th and 24th. It ended in demotion from the Football League in 1977, voted out and replaced by Wimbledon FC.

They became members of the Northern Premier League on the 18th June, 1977 but life remained a struggle. Indeed, they were left to reflect on 19th, 14th and 21st final placings in the first three campaigns and didn’t manage a top half finish (7th) until the end of their sixth season.

Winning a first trophy in forty seven years was welcome respite when they lifted the President’s Cup in 1984 but matters deteriorated on the league front culminating in relegation at the end of the 1987-88 season. Many unwanted records were established including an all-time heaviest loss, 0-9 at Chorley, and the heaviest home defeat, 0-8 v. Rhyl.

Ten mediocre seasons in the NPL First Division followed, before another relegation saw them demoted to the North West Counties League in 1998.

After years of struggle and decline, what happened in the NWCL was truly remarkable. They won their final fourteen league games to pip Mossley for the ’98-99 title on the final day of a dramatic season – a first senior championship in the club’s history.

It prompted fifteen years of moderate success and a nine season stint in Conference North, ending in April, 2014.

They finished runners-up in Evo-Stik Premier in 2015 recording more victories (27) than any other team in the division. Unfortunately, though, they lost in the play-offs to Ilkeston, a team they had beaten twice in the regular campaign. A fifth place finish in 2016 again culminated in play-off heartache, beaten in the final at Salford City.

Workington made it a hat-trick of top five finishes, fourth in fact, but again suffered disappointment in 2017 when they fell at the first hurdle, albeit a thrilling 3-2 defeat at Stourbridge.

It was a mid-table finish at the end of the 2017-18 campaign when an injury crises over the second half of the season saw them slump from a position of second at the turn of the year to a final standing of eleventh.

And the decline continued throughout the 2018-19 season with only eight league wins recorded, culminating in relegation. During the last three months of a depressing season, Workington lost nine consecutive league games at home – another unwanted club record!

Under new management, the Reds bounced back in style during the ‘19-20 campaign but, the intervention of a world-wide pandemic prevented a highly probable promotion and immediate return to Step 3 football. They were ten points clear at the top of the North West Division when the season was declared ‘concluded’ and recorded as null and void. 2020-21 also was not completed due to COVID with the Reds third when only eight games were possible.

Darren Edmondson was appointed in September, 2007 and became the longest serving manager in the club’s history before stepping down in December 2013. He had been in the hot seat for six years and three months. Some of his predecessors include Bill Shankly, Joe Harvey, Ken Furphy, Keith Burkinshaw, Alan Ashman, John McNamee, Bobby Johnstone, Barry Endean, Les O’Neill, Mick Heaton, Peter Hampton and Tommy Cassidy.

Gavin Skelton took over as player manager and guided the club to a second place finish, just two points behind champions, FC United of Manchester.
His success attracted the interest of Queen of the South who enticed him over the border to become their assistant manager.

Danny Grainger was in charge for two seasons but resigned in June to take up a post in Scotland and Chris Willcock became his successor following his appointment in July, 2021.

Borough Park has been Workington’s home for eighty four years and the record attendance for the ground was set in 1958 when 21,000 fans witnessed the visit of Manchester United (FA Cup 3rd Round). The Fourth Division Boxing Day derby v. Carlisle United in 1963 attracted a record league crowd of 18,628.

Plans for a new 8,000 capacity stadium, which would have housed Workington AFC and Workington Town RLFC and hosted three World Cup matches in 2021, were abandoned in June, 2019.

The subject is under constant review, however, with a scaled down version now the preferred option.

Their previous home was Lonsdale Park, adjacent to the current site, where they played from 1921 until 1937. The ground staged Workington’s only ever appearance in the 4th Round of the FA Cup when Preston North End emerged 2-1 winners before a 16,730 attendance.