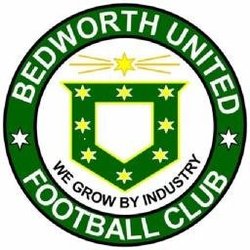 The first Bedworth Town football club was formed in 1895 when several matches were played against other local teams. They became founder members of the Nuneaton and District League in 1898, but by 1900 the club had disbanded.

Finishing runners up in the Second Division of the Coventry and North Warwickshire League in the 1904-05 season, the ECS changed their name to Bedworth Town on winning promotion and stayed in existence until the early 1920s. During that time, the town fielded a fine player in Jack 'Sandy' Sheldon who later played for Manchester United, Liverpool and Luton Town.

A third club came on the scene in 1925, when Collycroft United, formed in 1916, became the third team to name themselves Bedworth Town.

This was the most successful of the pre-war clubs, they were members of the Coventry and North Warwickshire League and spent one season in 1936-37 in the Central Amateur League.

For season 1954-55, Bedworth joined the Birmingham League and they qualified for the Northern Section for the league’s inaugural First Division. The Birmingham League was re-named the West Midlands League in 1962, but lack of success and problems off the field saw Bedworth Town change their name to Bedworth United in 1968.

In 1972 they obtained membership for the Southern League Division One North. In their first season they finished bottom, but this was only to be a setback as they made rapid strides into the Premier Division when the league was re-formed in 1982.

In the Premier Division, they finished 5th in 1982-83 season, and were stable in this league until a poor run saw them relegated at the end of the 1988-89 season.

On February 23rd 1982, the non-league world was staggered when a crowd of 5,172 - then a record for the Southern League in its new form - turned up at their Oval ground to watch them beat Nuneaton Borough 1-0 to go top of the league.

After becoming Bedworth United, they won the Birmingham Senior Cup on three occasions in the 1980s and were beaten finalists to West Bromwich Albion in the 1987-88 season.

Bedworth United were relegated to the Southern League Midland Division in 1988-89 season until the appointment of St Lucia-born Brendan Phillips as manager in 1990 launched a revival in the club’s fortunes.

From 1990 to 1997, the Greenbacks pushed for promotion back to the Southern League’s top flight and enjoyed a top six finish in four of the next five seasons. Phillips was tempted to move to Stafford Rangers during the 1992-93 season, but progress was continued under the helm of former Notts County midfielder Dean Thomas. Unfortunately, achieving the heady heights of a third place finish in the 1995-96 season, the club overstretched itself financially - and they faced possible closure until a group of die-hards acted to keep the club alive. After that, the Greenbacks occupied a bottom half finish for 14 seasons until the appointment In May, 2011, of a bright, forward-thinking management team led by Steve Farmer, assistant Adam Cooper, and the experienced Ian Roper on the field. In his first season, Farmer - at 31 the youngest manager in the club’s history - led them to their first promotion in their 65-year semi-professional history.

After finishing in a highly-creditable third place, they won promotion after beating Uxbridge 2-1 in a semi-final play-off and defeating Beaconsfield SYCOB 3-1 in the final. Sadly, the fledgling manager showed his inexperience by changing his promotion-winning team from the start and it culminated in the club lasting just one season back in the Southern League Premier Division as they finished in 21st place and went down on goal difference

2013-14 The Greenbacks played in the Evo-Stik Northern League Division One South. Andrew Fuller took over as Manager, however he resigned after a few weeks and was replaced by Nick Hawkins who unfortunately was unable to improve the results. He was then replaced by our current Manager, Stuart Storer along with Andy Penny as his assistant. Both came from Hinckley United. After a difficult start they produced a settled squad and staved off relegation at the end of the season.

2014-15 The Greenbacks returned to the Southern Football League. Stuart Storer remained as manager and in his first full season in charge the club once again won promotion after a 2-0 win over Barton Rovers in the play-off final. This was after finishing 4th after the league programme had been finished. This was the clubs first season on its new artificial grass pitch.

2015-16 The club played once again in the Southern Football League Premier Division. The season started slowly and a number of changes to playing staff made up until Christmas. The club pushed to avoid relegation but ultimately were unsuccessful, although all agree this was due to the start of the season and not the group of players at the club at the end. The club returned to the Northern Premier League Division 1 South

The 2016-17 season saw the club play once again in the Northern Premier League Division 1 South. A season that saw a number of injury problems and changes in playing staff saw a mid-table finish. The club did have a successful run in the FA Cup, eventually losing out to National League side Curzon Ashton.

2017-18 Saw the team struggle in the league early on with injuries and Stuart Storer was unable to field the same team for two games in a row. Come Christmas though with the team becoming more settled results started to come and the Greenbacks push saw them finish 4th in the league and make the play-offs where they met Chasetown in the semi-final running out 2-1 winners to book a place against Stamford in the final. Bedworth eventually won 2-1 after extra-time after conceding 7 minutes into injury time. With the restructuring of the Leagues Bedworth were now promoted into the Evo-Stik Southern premier league central. Unfortunately this foray into step 3 of the Non-League ladder was short lived and the team were relegated back to step 4 at the end of the 2018-19 season. In the season that never was due to Covid-19 The Greenbacks were getting a head of steam up and were looking like they might have made the play-offs but with the season being brought to a premature halt Bedworth would start the 2020-21 season in step 4 again. However, as will the season before it was never completed due to Covid. 2021-22 sees Bedworth once again return to the Northern Premier League.