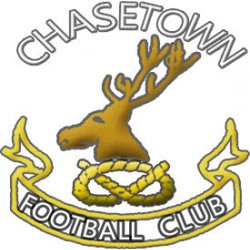 Chasetown have confirmed the signing of midfielder Jakob Burroughs.

Andy Parsons says he is looking to bring experience to his latest club in Chasetown in the Northern Premier League Midlands.

Chasetown have announced the signings of Mitch Botfield and Andy Parsons for the Pitching In Northern Premier League 2021/22 season.

Chasetown have confirmed 13 more players to have signed with the club for the Pitching In Northern Premier League 2021/22 season.

The side played their first competitive games in the Cannock Youth League, remaining there until 1958-59 when they were accepted into the Lichfield and District League. An impressive debut season saw them finish third. During their three-year stay in the League, the Old Scholars were runners-up in the League and Challenge Cup competition.

1961-62 saw them enter the Staffs County League, while a reserve team stayed on in the former League. First-team success followed with the Lichfield and Rugeley Charity Cups, before the club were admitted to the West Midlands (Regional) League Division One and changed to their current title of Chasetown FC in 1972-73.

Under Percival and later Bill Murray, Chasetown established themselves as one of the leading clubs in the division. In 11 seasons they won the title in 1977-78, finished second five times, third twice and fourth twice to earn a much-respected record.

However, despite the club’s on the field success, Chasetown were prevented from promotion because they were playing on a park pitch at Burntwood Recreation Centre.

A breakthrough came in 1983 when they re-homed with a move to the current ground, The Scholars Ground, which coincided with a move up into the West Midlands (Regional) League Premier Division. Bryne Scorey was now the manager as Chasetown made Church Street their permanent home.

The club took their time to adapt to life at the top, finishing in the lower reaches of the table in their first three seasons.

Things changed though from 1986. Paul Darby arrived with assistant Mervyn Rowe, who took the helm when Darby joined Wolverhampton Wanderers as a physiotherapist. Rowe brought about an improvement in the playing squad, with mid-table finishes in the late 1980s followed by a trophy in 1989-90 when Chasetown lifted the League Cup with a 5-2 win over Halesowen Harriers in the Final.

Mervyn Rowe stepped down as manager at the start of the 1993-94 season part way through an astonishing run of 36 league games unbeaten – a complete calendar year without defeat.

However, success progressively slid away and a succession of managers (Graham Smith, Benny Brown and Cliff Painter) could not recapture any of Rowe’s successes, resulting in three seasons in the bottom three or four of the newly formed Midland Football Alliance, of which Chasetown was a founder member.

Rowe returned to the helm in 1997-98 and remained as manager for four years, as Chasetown regained mid-table status with the likes of former Wolves striker Shaun Bradbury leading the way in the goal scoring stakes winning two MFA Golden Boot awards in three seasons.

Rowe stepped aside again, but unsuccessful tenures with Kevin Foster and Paul Darby as manager (his second spell) saw the Scholars struggling again, until November 2002 when Michael Rowe, Mervyn’s son, took over as boss, with Charlie Blakemore as his assistant. An excellent end to the 2002-03 season saw the club finish 9th, after languishing near to the relegation zone for most of the campaign.

Rowe Junior left The Scholars Ground in February 2004 due to work commitments but, now under Blakemore’s leadership, the Scholars improved again, finishing 6th, and in Blakemore’s first full season in charge of the first team, 2004-05, Chasetown lifted the Walsall Senior Cup for the third time beating Tividale 2-1 at Walsall FC and finished second to Rushall Olympic in the Midland Football Alliance.

That disappointment of missing out on promotion spurred Chasetown into an incredible season in 2005-06. The club was thrust into the national spotlight in November 2005 upsetting all the odds by reaching the First Round of the FA Cup for the first time in their history, overcoming famous non-league side Blyth Spartans in front of a then-record Chasetown attendance of 2,134.

The BBC were quick to bring this feat to a Sunday lunch-time audience of 3.2 million on “Match of the Day Live” as they broadcast the First Round Proper tie against Oldham Athletic. In front of 1,997 supporters, Chasetown took the lead through Nicky Harrison, only for the Latics to level the scores a few minutes later and send the game into a replay. Over 2,300 supporters followed Blakemore’s men up to Boundary Park – the highest away following at Oldham Athletic all season – but the romance was over as the home side won 4-0.

During that record-breaking season, the Scholars notched a record eight consecutive victories in the League, went 22 games unbeaten in League and Cup, and regularly smashed their record League attendance, ending the season with 839 for the visit of Romulus in the game which clinched Chasetown the League title.

At the time of the FA Cup run, Chasetown lay in 14th place and 20 points adrift of league leaders Malvern Town, before beginning an astonishing run of victories. By April 2006 Chasetown topped the League table for the first time in the season. The final day saw Chasetown in pole position Chasetown lifted the Midland Alliance trophy and gain promotion to the Southern League Division 1 Midlands. The BBC cameras were at the Scholars Ground again, featuring both goals in their FA Cup Final programme.

Season 2006-07 saw the club finish third in the Southern Midland Division One but suffered the heartbreak of losing 1-0 to local rivals Willenhall Town in the Play-off Semi-Finals.

2007-08 saw Chasetown become even more firmly embedded in FA Cup folklore when they defeated Football League Division One side Port Vale in a Second Round Replay to become the lowest ranked side to ever make the Third Round of the World’s most famous domestic cup competition.

Their reward was a home tie against Championship side Cardiff City who boasted multi-millionaire players like Robbie Fowler, Jimmy Floyd Hasselbaink and Trevor Sinclair amongst their highly rated squad.

In front of a record breaking home attendance of 2,420 the Scholars dared to take the dream one step further as they took the lead against Dave Jones’ Bluebirds side via a Kevin McNaughton own goal in the 17th minute.

The class of a team six leagues and some 136 places higher than Chasetown did tell and a first half injury time equaliser from former Aston Villa man Peter Whittingham enabled Cardiff to regroup at the interval and further goals from 17 year old debutant Aaron Ramsey (his stepping stone to a great career at Arsenal) and Paul Parry finally ended Chasetown’s marathon ten game cup run.

Season 2008-09 saw Chasetown amongst the front runners and a fourth place finish ensured that they would contest the Play-offs. In the Semi-Final the Scholars demolished third placed Atherstone Town at Sheepy Road 5-0 to take their place in the Play-off Final. A record crowd of 3,111 at Nuneaton Town’s Liberty Way stadium witnessed a tight, tense game, but a solitary strike from Ben Foster ended the Scholars dream of promotion for another season at least.

The club again made history on Friday July 10th 2009 when they became the first team to play a match in front of a paying crowd at the Bluebirds’ new multi million pound home – the Cardiff City Stadium – in front of 5,270 spectators.

Relocated to the Northern Premier League Division One South for 2009-10, Chasetown’s remarkable story finished on a high note as the club went on to become runners-up and, after a 3-2 play off Semi-Final win over Sheffield FC, a 1-0 win versus Glapwell at the Scholars Ground in front of 1,265 spectators ensured Chasetown would be playing in Step Seven of the Football League Pyramid for the first time in their history.

For much of the 2010-11 season, Chasetown were in or around the Play-off positions, eventually finishing 10th in their inaugural season. Chasetown’s League campaign was distracted though by another incredible cup run. Despite being from the third tier of non-league football, Chasetown upset the odds time and time again in the FA Trophy.

2011-12 was the 40th season the club has been known as Chasetown FC, but unfortunately, was a historic season for all the wrong reasons, as they were relegated for the first time in their existence. Charlie Blakemore left the managerial role in October 2011 due to work commitments, and the appointment of Chris Brindley started well with 19 points from his first 8 games in charge. However, a run of 13 league games without a win saw The Scholars needing victory on the last day of the season at Burscough. A 4-4 draw was not enough.

Craig Harris replaced Brindley as manager and renewed Chasetown’s love affair with the Walsall Senior Cup with an emphatic 4-1 win over Rushall Olympic in the Bescot Final in 2013-14.

Harris’ tenure was short-lived though with the club hovering just above the relegation zone, Former Tamworth FC manager Marcus Law was appointed, giving him the sole aim of keeping Chasetown from getting relegated. An impressive run took Chasetown to 13th in the league and another Walsall Senior Cup Final, narrowly beaten 4-3 by Walsall after extra time.

Law left in the summer, replaced by former Rugby Town boss Dave Stringer. He took Chasetown to the verge of the Play-offs in his first season, finishing 7th, but the following year Chasetown struggled to 17th in the League. Chasetown did reach the Staffordshire Senior Cup Final for only the second time in their history though, losing out to Stoke City on penalties. Stringer resigned in the summer of 2017.

Former Norton United boss Scott Dundas was appointed, on the back of them having a successful FA Cup run of their own. With an almost completely new squad of players. Dundas' men stayed in and around the top half throughout the 2017-18 season and pushed into the play offs during the final two months before narrowly losing to Bedworth in the play-offs.

Expectations were high again but a season and a half of mid-table in the league saw Dundas leave the club by mutual consent.

Former Chasetown Reserves manager Mark Swann would take the reins of the first team in February 2020, only for play to be stopped halfway through March 2020 due to the ongoing Coronavirus pandemic, with Swann having managed just eight fixtures.

With a full pre-season behind him, Swann starts this campaign on the back of a successful pre-season, with encouraging expectations as a new era begins at Chasetown.