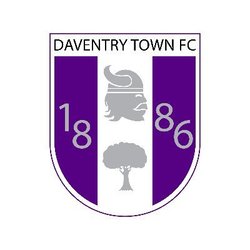 Since forming in 1886 Daventry Town Football Club has had a chequered history over its 132 years, from a devastating fire in 2005 which threatened the club’s existence to an incredible cup run which saw over 700 fans travel to League Two Chesterfield in 2014.

Leaving the “Hollow” in the centre of the town in 1990 when the club moved to its current home at the Elderstubbs, the club’s fortunes suffered a devastating blow in 2005/06, when the Elderstubbs clubhouse and changing rooms were destroyed during an arson attack.

With the cub on the brink of going out of business, Iain Humphrey took the helm and work began to revitalise the club with the introduction of new floodlights, walkways and other infrastructure to support the clubs promotion ambitions.

2007/08 was a very successful season for Daventry Town. They won UCL Division One, losing just once, and defeated three Premier division teams en route to the League Knockout Cup final, where they lost to Desborough Town 3–2.

In the season 2009/10, Daventry won promotion to the Southern League Division One Central, by becoming champions of the United Counties League under the guidance of manager Ady Fuller. Daventry Town reached the last sixteen of the FA vase, the final of the NFA Senior Cup, beaten by Corby Town by 3 – 2 and the semi – finals of the UCL KO cup before Captain Paul Saunders lifted the UCL championship to secure Daventry Town a coveted place in the Southern League for 2010/11.

Under the guidance of Ady Fuller and assistant Paul Lamb, their first season in the Southern League almost ended with another promotion however they lost in the play-off final to Hitchin Town.

Former Aston Villa, Charlton and Republic of Ireland international Mark Kinsella became manager in the summer 2011 however his season long spell was unsuccessful and former Daventry United/Ford Sports Manager Darran Foster was appointed with Neil Champelovier as his assistant and Paul Dempsey as coach in 2012.

Daventry Town made history in 2013/14 by reaching the First Round of the FA Cup, a visit to Chesterfield's Proact Stadium their reward. They were eventually beaten by 2 – 0 in front of over 700 of their own travelling supporters and a crowd of over 5,269. Town also reached the first round proper of the FA Trophy losing 1-0 to Maidenhead United.

Town had been season-long favourites for promotion from the Southern League Division One Central in 2013/14 but the back log of fixtures caused by the cup runs took effect. They lost the promotion play-offs at the semi-final stage at Kettering Town, narrowly beaten 1-0.

Darran Foster resigned as manager on 30th October 2014 following budget cuts and was replaced by former Watford, Oldham and Preston star, Allan Smart. Former Manager Ady Fuller was appointed as his Assistant Manager with the bulk of the players supplied by Smart’s London based Academy.

In the Summer of 2015, the club were moved to the Northern Premier League Division One South and with Smart and the players based in the South, he resigned in July 2015.

Darran Foster returned to Daventry Town as Manager just nine months after resigning however he also resigned on Easter Saturday after a 5-0 home defeat to Kidsgrove Athletic.

In a move planned to reset the club’s financial problems, Town took voluntary relegation to step 6 football and the club returned to the United Counties League Division 1.

In April 2016, Steve Tubb took over as Chairman.

On the 12th May 2016, the club appointed Arron Parkinson and Andy Marks as joint managers. With a zero budget for the season, the team management have worked wonders in turning the club around and winning the UCL Division 1 title, unbeaten at home.

Andy Marks left the club at the end of the season due to family and work commitments. Ian King joined Parkinson as Joint Manager in May 2017.

Town finished the 2017/18 season in 10th position, winning the Buckingham Charity Cup for the first time in their history.

2018/19 saw the return of the Reserves managed by Andy Emery. Ian King left to join Northampton Town Academy. Arron Parkinson took over as Manager with goalkeeper Matt Finlay as his Assistant Manager and Pete Harris coming in a Club Coach respectively.

After an excellent start to the 2018/19 league season and two FA Cup wins scoring 16 goals in the process, the Town went on to win the UCL Premier Division with a 1-1 draw at Pinchbeck United. The club were presented with the trophy on Easter Monday after a 3-0 win over local rivals and pre-season favourites Rugby Town in front of a crowd of 393. Town also won the UCL Knock Out Cup by beating Holbeach United 3-1 in the final at Raunds Town. Town returned to step 4 in the BetVictor Southern League Division One Central for the 2019/20 season. The return to Southern League football was unfortunately curtailed by the Covid-19 virus with the team safely in mid-table before the season ended. Town had also reached the final of the Northants Senior Cup (Hillier Cup) which was to have been played against Kettering but again this was cancelled.