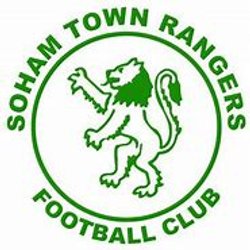 Soham Town Rangers have announced the signing of striker Oliver Ward for the Pitching In Northern Premier League 2021/22 season.

Soham Town Rangers have announced the signings of Finley Iron and Sam Bennett.

Soham Town Rangers were formed in 1947 as a result of a merger between Soham Rangers (Formed 1919) and Soham Town (Formed 1920). The Julius Martin Lane ground, which at the time was the home of Soham Town, is still the home of the club today, after it was purchased in 1952.

The new club started life in the Cambs League, also running a Reserve team. In 1956, they joined the Peterborough League where they were to remain until 1963. During their time there, they won the league and the league cup on three separate occasions. A measure of the level of support enjoyed by non-league clubs in those days was the fact that on their first home game of the season, on August 22nd 1956, a local derby against near neighbours Ely City, over 500 match day programmes were sold - Unfortunately, the 6-2 drubbing for the hosts took the shine off the day.

The club joined the Eastern Counties League in 1963 and remained there until 2008.

During this time, considerable ground development has taken place - The social club was built in 1968, new dressing rooms and showers were erected in 1979, along with a grandstand extension. In 1981, a lounge bar extension was added to the social club. Floodlights were erected in 1983 and were inaugurated by the visit of an Arsenal XI in front of 1,200 spectators. A new grandstand eventually replaced the original wooden structure at the beginning of the 1990s, whilst various other developments have taken place in order to qualify the club to compete at step four in the non-league pyramid.

Soham enjoyed considerable success in the Cambridgeshire Invitation Cup during the 1990s, winning it on three separate occasions, including for the first time in their history in 1991 defeating March Town United, before repeating the feat again in 1998 and 1999 against Wisbech Town and Newmarket Town respectively. The Greens were also the first winners of the Eastern Counties Millennium League Cup, when they defeated Diss Town on penalties in the final in 2001.

The 2007-08 season was to be the clubs most successful season to date winning the Eastern Counties Premier Division for the first time, beating nearest challengers Needham Market 4-0 on the final day of the season to clinch the title in front of 680 spectators at the Lane, and with it promotion to the Southern League for the first time in their history.

In the first three seasons in the Southern League, Soham recorded finishes of 15th, 11th and 17th. At the end of the 2010-11 campaign, Ian Benjamin, who had been at the club for six seasons and was in charge of the 2008 title winning side, stepped down from his position as 1st Team Manager.

Soham transferred to the Isthmian League Division One North for the 2011-12 season with former striker Andrew Furnell returning to take over as Player/Manager. However with the Greens languishing near the foot of the table, Furnell was replaced by former Histon Managers Steve Fallon and Ian Hart in March, with the club finishing the season fourth from bottom. It was a successful campaign for the club’s other sides though, with the Reserves returning to the Kershaw Premier Division after finishing as runners-up in Cambs Senior A, whilst the Under 18s progressed to the 1st Round of the FA Youth Cup, where they were beaten by Charlton Athletic in front of a crowd of over 500 people at the Lane.

The 2012-13 season saw Soham record their highest ever League position, finishing seventh in the Isthmian League North Division, five points outside the play-offs. Soham won the Cambs Invitation Cup for the fifth time in their history in 2014 beating CRC 6-1 at the Abbey Stadium but were unable to retain the trophy the following season, narrowly losing 2-1 to Cambridge City in the final.

Soham did finish the season with an accolade though, winning the Isthmian League Respect award for the second consecutive year having gone through the season having not collected any dissent points, which saw the club commended in the end of season FA Respect and Fair Play awards.

Following a difficult start to the 2015-16 campaign, Steve Fallon stepped down as Manager at the start of October to be replaced by senior players Robbie Nightingale and David Theobald, who eventually guided the Greens to seventeenth position before leaving to take over at Cambridge City in December 2016. Rob Mason was appointed Player/Manager, and following a difficult start, finished the season seven games unbeaten, with the Greens securing their League survival on the final day of the campaign with a 4-3 home win against Maldon and Tiptree, with two goals in the final five minutes.

The following seasons have seen finishes of thirteenth and sixteenth in the table. Unfortunately the last two seasons have been curtailed due to Covid, however this year sees the club move into the Northern Premier Division Midlands Division, meaning it will have competed in all three sections of the Trident League.

This year also marks 100 years of football being played at Julius Martin Lane, with the club arranging a number of events to mark the occasion.