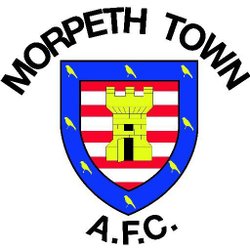 Morpeth Town have announced the signing of striker Josh Scott.

Morpeth Town have bolstered their squad with the capture of Connor Pani and Ryan Wombwell on season-long loan deals from Gateshead.

Morpeth Town have confirmed that attacker Andrew Johnson has undergone shoulder surgery, ruled him out for up to six months.

Morpeth Town Football Club was established in 1894, and through more than a century of football, have continued the tradition of carrying Amber and Black as their team colours.

The club was formed after an amalgamation between Morpeth United and Morpeth FC, playing at Stobhill Cricket Field.

The club spent half a century in the Northern Football Alliance before stepping up to the Northern League on their one hundredth anniversary, winning the Division Two title in their first season and finishing sixth in Division One and Northumberland Senior Cup runners-up in their second. In 1998-99 they made it to the final Qualifying Round of the FA Cup, losing 1-0 at home to Nigel Clough’s Burton Albion.

The club moved to a purpose-built stadium in 1994, which coincided with a League and Cup ‘double’, and with it, promotion to the Northern League. Craik Park was named after the father and son W & R Craik who had served as secretary between 1920 and 1985. Current President Ken Beattie was the man behind the stadium and since 1992 he has revived the club’s fortunes.

Membership of the Northern League followed in 1994-95 and the following year saw the Second Division Championship being presented to Morpeth. The club finished sixth in the First Division at the first time of asking, as well as reaching the Final of the Northumberland Senior Cup.

After sitting comfortably mid-table between 1996-97 and 1999-2000, Morpeth narrowly avoided relegation on goal-difference in the 2000-01 season and finished once again one spot above the relegation zone in 2001-02.

The next few years saw Morpeth Town move back into the middle of the table before a sixth place finish in 2005-06, Morpeth’s equal top performance in the Northern League.

In 2006-07 Morpeth won the Northumberland Senior Cup for the first time since 1886 (as Morpeth Harriers) with a 3-2 victory over Blyth Spartans.

Disaster struck in 2009-10 as Morpeth Town were relegated to the Second Division and things got even worse a season later as Morpeth Town finished bottom of the Northern League’s second tier.

The club was in dire-straits with President Ken Beattie and Chairman Jim Smith trying their best to keep the club running by bringing the ground up to Northern League standards whilst being forced to ground share with local rivals Bedlington Terriers. The club was within weeks of folding at one point.

The Highwaymen began their revival in 2011-12 under the stewardship of Nick Gray who moved to the club from Seaton Delaval and brought a number of players. In his first season Morpeth narrowly avoided promotion back to the top tier, finishing fourth and at one point won fourteen consecutive home games.

2012-13 saw the side improve once more, finishing one place higher in third position, beating out Jarrow Roofing on goal-difference to earn promotion.

After earning promotion Morpeth Town managed to avoid the drop quite comfortably finishing in 17th place. During the season, they also went on a then historic FA Vase run to the Quarter-Final stage.

In 2014-15 saw further improvement, with the Highwaymen finishing eighth in the table and reaching the Northumberland Senior Cup Final. The club was now beginning to attract high-caliber players to the area, with the likes of Keith Graydon and Ben Sayer signing from higher level football.

The 2015-16 season brought Nick Gray his first trophy for the club, and what a win it was, beating heavily favored Hereford FC 4-1 in the FA Vase Final at Wembley Stadium. Despite going a goal down in the first two minutes, the Highwaymen battled back, 45-year old Chris Swailes netting to equalise before half-time. The second half brought an onslaught from Morpeth, Luke Carr scoring after just a minute before Sean Taylor and Shaun Bell netted on a famous day for the Northumberland club. In addition to the Vase, Town finished fourth in the Northern League. The following season, the club narrowly missed out on winning their inaugural Northern League title, finishing in second place behind South Shields.

More recent times have been hugely successful with promotion secured to NPL East at the start of the 2018-19 season and a step into the unknown. Far from being daunted by this prospect, the Highwaymen won the title by a distance and added the Senior Cup to claim an unprecedented ‘double’.

The 2019-20 season was one not experienced by any club in history as a global pandemic brought the campaign to an abrupt conclusion, with Town on a 10-game unbeaten run and heading for the play-off spots.

The following summer brought change in the manager’s dugout as long-serving Nick Gray stepped down to be replaced by Stephen Turnbull, who takes on his first job in management, having worked on the coaching staff at Craik Park as well as being a player.

In his first season, curtailed by the national Covid situation, the Highwaymen reached the Third Round of the FA Trophy, the furthest they’ve been in the competition in their history.

In the ‘21/22 campaign, a season of records and drama unfolded as a side bottom by mid-September came within a fraction of the play-off places after Craig Lynch took the reins and transformed the team’s fortunes. The turnaround was spectacular and included runs to the FA Cup Fourth Qualifying Round and the Fifth Round Proper of the FA Trophy, the furthest the club has ever been in the competition.