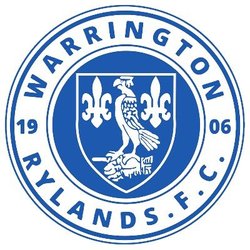 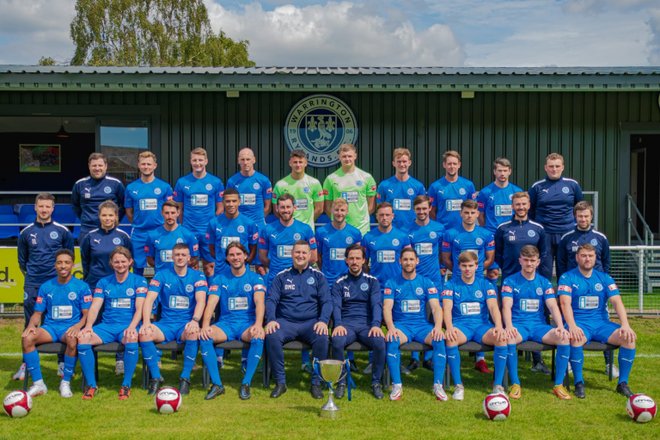 Warrington Rylands 1906 Football Club was formed as a local works (wire manufacturer) team in 1906 as part of the Rylands Recreation Club whose clubhouse and grounds sat on the eastern side of Warrington at a site off Gorsey Lane. It was opened by the Rylands Brothers, owners of the famous Wireworks to provide sports and leisure facilities for their employees.

The team also played in the Lancashire Combination’s war time Auxiliary Section during the 1918/19 season finishing fifth in the table.

Further success followed in the Mid-Cheshire League in 1980/81 and 1983/84. Losing just once when winning the Mid-Cheshire League in 1983/84 Rylands thought they were on their way to Wembley when they entered the last 32 of the FA Vase with wins over Blackpool Mechanics, Maghull, Atherton LR and Rainworth MW. But it was against the latter that saw an appeal against the length of the pitch, when it was found to be just over a yard short, a replay was ordered which Rainworth won 1-0.

Prior to the start of the 1996/97 season the club formed a link with a local junior club – Beechfield – with these youth sides bringing trophies into the club winning the Warrington & District Youth Cup in 1997, and in 1999 both the Warrington & District League and Cup. These young players rejuvenated the club and in 1999/2000 the first team reached the Mid-Cheshire League Cup Final only to lose out to Knutsford in a penalty shoot-out after being reduced to nine men with twenty minutes of extra-time left. Season 2001/02 would see a surprise end to the campaign. An undefeated run of nine games saw the first team snatch runners-up spot on goal difference.

The club then once more fell on hard times and in 2008 amalgamated with Crosfields FC to form a new club, Crosfields / Rylands FC. Under the new name both the first and reserve teams reached Mid-Cheshire League Cup Finals, unfortunately losing in both.

In June 2018 Dave McNab was appointed joint first team manager alongside local lad Stuart Wellstead as player manager, at the club and set about transforming the team and ambitions for the club.

During the pre-season McNab and Wellstead commenced a major recruitment drive to build a team that would be competitive at a higher level. The recruitment, combined with excellent preparation and outstanding performances on the pitch, saw the club win the North West Counties Division 1 South Championship and also go on to win the Division One Champion of Champion’s trophy, beating Division 1 North Champions, Longridge Town 3-0.

For season 2019/20 McNabb took sole charge of the team and the club changed its name to Warrington Rylands 1906 FC as a mark of its ambition to continue with its goal to reach the highest level it could. The name change ensured the Rylands name would remain synonymous with the club, whilst also recognising the club had played and been a part of Warrington and Rylands since 1906, still playing on the same Ground.

In preparation of playing at the highest level it had ever reached, major infrastructure took place at the Gorsey Lane Ground with the building of seated stands, covered terracing, changing rooms, spectator toilets, boardroom and provision of in ground food and drink. Warrington Rylands 1906 FC Gorsey Lane Ground was ready to take its place in the North West Counties Premier League for season 2019-/0 with the unveiling of the newly opened Ron Stretford Stand, the clubs former Treasurer, and the Ian Finchett Pavilions, the clubs former Chairman.

The club were denied back to back promotions to the Northern Premier League due to the Covid Pandemic that caused the 2019/20 season to be abandoned with the club sitting second in the North West Counties Premier League. Similarly in season 2020/21 the season was curtailed with the club in top position in the league.

Season 2020/21 however, turned out to be one of the most important season’s in the clubs history winning the FA Vase at Wembley 3-2 against Binfield FC with centre-forward Elliott Nevitt scoring a hat trick.

Having broken the clubs previous record of a last 32 place against West Auckland the team, due to the Covid Pandemic, entered in to a weekly round of FA Vase Cup games beating the 2019/20 FA Vase Hebburn Town Winners in the Quarter-Final at Gorsey Lane only one week after the North East team had beaten Consett Town in the delayed 2020 final at Wembley. In the Semi Final Rylands beat Walsall Wood 2-1 to send them to Wembley for the Final the following Saturday.

The Club went in to overdrive to sell 1,500 tickets in four days which are the biggest gate receipts in Rylands history, as well as breaking other records by becoming the first Warrington football team in the history of the game to win a national tournament.

Season 2020/21 also saw the club enter the FA Cup which saw the team make the Second Qualifying Round at home against York City, live on the BBC and in front of a COVID restricted sell-out crowd of 300, the furthest the club has ever achieved in the FA Cup.

Furthermore the week after the successful Wembley Final the club were promoted to the Northern Premier League (West) as part of the FA National League restructure as one of three highest point per game achievers during the two previous covid affected seasons.

Season 2021/22 was again a successful one for the club with Warrington Rylands winning the NPL West division at the first time of asking on a final nerve wracking game of the season and also saw the club take part in the FA Trophy for the first time in our 115 year history. This year will now see Warrington Rylands 1906 FC competing in the Northern Premier League (Premier) the highest level the club has played.