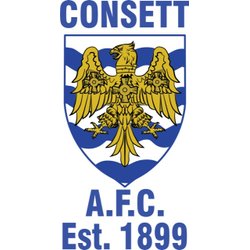 Consett AFC will contest the 2022-23 season at Step 4 of the non-league pyramid - the highest level the club has ever played at. But their ambitions don't end there, and under forward-thinking Chairman Frank Bell they hope to not only establish themselves but aim to go higher. They won their place in the Northern Premier League with a 2-1 victory at Histon in an inter-step play-off, with Dan Marriott - a local lad who rose through the club's junior ranks - scoring the winning goal.

He's a prime example of how the club aims to develop local talent, and with more than 60 junior teams aged from 7-19, and a reserve team competing at Step 7 in the Wearside League, they hope others will follow. Like most non-league clubs, Consett endured the frustration of seeing two years of hard work come to nothing due to the coronavirus pandemic, with 2019-20 declared null and void by the FA, and the following season curtailed. They also saw the momentum of their best-ever run in the FA Vase interrupted not once but twice, with the Semi-Final delayed until September 2020, and the Final eventually played almost a year late.

The players, staff and committee of the County Durham club got their long-awaited day at Wembley on May 3, 2021, though a 90,000-seater stadium with no fans made for a surreal experience. In a thrilling final, Consett took the lead twice with first-half goals from Ali Alshabeeb and Dale Pearson but were swiftly pegged back by fellow Northern League side Hebburn Town both times. Pride in the team's fine performance on the big stage turned to heartbreak when the Hornets stung the Steelmen with a late goal to make it 3-2 and take the Vase to South Tyneside.

2021-22 saw the Steelmen, whose team is a good, talented blend of youth and experience, achieve their pre-season aim of promotion. They led the Northern League for seven months, taking a mid-season managerial change in their stride. But a disappointing run-in, losing five times to lower-table opponents as a crippling injury list caught up with them, handed the initiative to North Shields, who ended nine points clear as worthy champions, leaving Consett as runners-up for the fifth time in their history, and having to go up the hard way, via the play-offs.

The foundations for the brand of football fans enjoy today were put in place by Kenny Lindoe, who became manager in 2005, two years after he'd won the Northern League on a shoestring at Brandon United. Consett had just been relegated to the 2nd Division for the second time in three seasons. They’d gone straight back up the previous time, and did it again, breaking a host of club records along the way. They started with 19 consecutive wins, finished with 102 points, a +103 goal difference, and a biggest-ever win, 12-1 v Guisborough Town.

Consett built a reputation as the league’s ‘entertainers’, and hopes were high that 2007-08 would see them break their duck and win the championship of the Northern League, which they’d joined in 1970. They’d only come close once before, in 1976-77, finishing level at the top with Spennymoor United, but losing a title play-off 3-0 - goal difference not counting at the time.

The campaign started well, and Lindoe’s side were among the front-runners until the turn of the year. But what was until then their best-ever run in the FA Vase, which ended in a 5th Round exit at Merstham, in Surrey, losing 5-4 after extra-time after having a man controversially sent off, cost them dear. The league games they had to catch up with proved too much for a relatively small squad, and they had to settle for the runners-up spot behind Durham City.

In 2008-09 they went even closer, twice coming within minutes of a first league title. A point from their last game at Whitley Bay would have made them champions, and they led 2-0 at half-time. But a second-half fightback saw the FA Vase finalists (and eventual winners) break Consett hearts with a late winner. Three days later Newcastle Benfield went to Penrith needing a win to snatch the championship from Consett's grasp, and got it with a few minutes to go, leaving the Steelmen as runners-up for the second year in a row.

2009-10 was ruined by injuries to an extent no one connected with the club could remember, with up to 12 players out at a time, and 41 different players used during the campaign. Away form was excellent, with 14 wins on the road matched only by champions Spennymoor. But home form was erratic to say the least, and the Steelmen had to settle for a 10th-place finish.

In 2010-11, Lindoe carried out a major rebuild, and was rewarded with a rise to the top of the table on the back of excellent home form, where his team went 13 games unbeaten before losing to Spennymoor in late February. But they lost momentum after the manager suffered a near-fatal St Patrick's Day heart attack. Under caretaker boss David Hagan and assistant David Robson, they rallied to finish runners-up for the third time in four seasons. Their tally of 93 points (and 103 goals) was their best-ever 1st Division haul and would have been enough to win the title most years.

The next two years, overshadowed by planning wrangles, saw the club finish 15th and 9th. The end of an era came in May 2013, when the club finally left Belle Vue Park, their crumbling old home of 63 years. It had been built by volunteers from the town’s long-gone steelworks, and its opening game in the old North Eastern League (NEL) v Sunderland Reserves in August 1950 attracted the never-bettered gate of 7,000.

Memories of the old ground and the teams who played there would live on among older supporters – they won the NEL League Cup in 1951 and 1954, the Northern Counties League in 1962, the Northern League Cup in 1995, and reached the FA Cup 1st Round twice, in 1958 and 1996, the second under long-serving manager Colin Carr, who was in charge for 15 years.

The new ground, named Belle View Stadium, was built by Durham County Council at a cost of £3million in exchange for the club giving up the remaining years on the lease for the old ground. It came complete with a state-of-the-art 3G pitch, ready to withstand all but the worst excesses of a North West Durham winter.

The opening night, Friday 22 November 2013, was beyond anyone’s wildest dreams. Newcastle United, who provided the opposition for the Steelmen’s last game at the old ground, were first footers at the new one, and a Peter Beardsley-led side performed the honours in front of a bumper crowd of 2,954. Consett-born FIFA official Mark Clattenburg, who gave his services for free, had to delay kick-off by 25 minutes so everyone could get in. The Magpies were party-poopers, winning 2-1, but a week later Consett beat Spennymoor Town by the same score in the ground's first Northern League game.

That 2013-14 season, when the club had to play their first 18 league games away while their new home was being finished, was always going to be one of consolidation, and they duly finished 11th. But Frank Bell, who took over as Chairman in 2013, put in place a plan of gradual improvement, on and off the field, with the aim of making Consett AFC a force to be reckoned with over the next few years.

There was a setback in January 2015, when, after nearly 10 years and more than 500 games in charge, Kenny Lindoe stood down as manager. He’s still involved with the club, scouting and identifying and recruiting players. His replacement was Colin Myers, who cut his coaching teeth under Kenny at Brandon before becoming manager at Bishop Auckland, where he won the Durham Challenge Cup, and was then assistant manager at Blyth Spartans when they reached the FA Cup 3rd Round.

After a good end to 2014-15, and an improved 9th-place finish, 2015-16 started promisingly, with FA Cup wins over Colne and Scarborough, and a narrow defeat by National League side Bradford Park Avenue. But form slowly deteriorated, leading to early exits from all the other cups, and after a defeat at West Auckland on 5 March 2016 – the 9th in 13 games – Myers resigned.

Mark Eccles, a Consett lad who'd played more than 100 games for the club, became interim manager until the end of the season, and got the team back on track again, playing attractive attacking football. Ten wins, three draws and just three defeats in his 16 games in charge saw his appointment made permanent at the end of the season – he became one of the youngest managers in the Northern League at just 35.

His aim for 2016-17 was an improvement on the 7th-place finish and good cup runs. A well-earned draw at National League North side Curzon Ashton in the FA Cup brought a Belle View replay watched by a 700-plus crowd, but a sending off left Consett with an uphill task, and they lost 1-0. A top-six finish proved just beyond them too, as a mid-season loss of form meant they finished in the same 7th position as the previous year.

2017-18 saw the return of all-time record goalscorer Michael Mackay, and the move paid dividends as he scored twice as Consett made it a lucky seven Durham Challenge Cup wins, beating Dunston UTS 4-2 to lift the trophy for the first time in 11 years. Mackay was runner-up for Northern League Player of the Year, and his strike partner Michael Sweet was the league’s Young Player of the Year for the second time, after a season in which he scored 43 times – including the other two in the cup final.

Prioritising the cup saw the Steelmen’s league form drop away towards the end of the season, and Eccles’ side finished 9th as he prepared to get married and move to Scotland. His replacement, appointed in the summer of 2018, was an even younger manager, another former Consett player, Chris Moore, just 34, but highly rated.

Moore's side began the season in stunning form, with nine straight wins, and gave Evo-Stik League side Warrington Town a scare in the FA Cup before bowing out in a replay. They led the table for the first half of the season, but form dipped after the turn of the year and the Steelmen finished 4th – still their best placing in seven years. However, the end of the season brought an unexpected turn of events when Moore informed the club he was resigning to take up a full-time job at Sunderland AFC Academy.

This set the stage for Terry Mitchell, a coach and coach developer at Newcastle United Academy, to take the helm, and he got the club to Wembley for the 2020 FA Vase final. That sort of achievement doesn't go unnoticed, however, and when National League North club Blyth Spartans needed a new boss in November 2020 they turned to Terry and his No 2 Graeme Coulson.

Coach Andy Coyles – a UEFA 'A' licence holder and former Penrith manager - stepped up on an interim basis and was then handed the job permanently. Now, with the help of his assistant Richie Hill, goalkeeping coach Ben Cole and physio Gavin Scott, they're aiming to make their mark on the biggest stage the club has ever enjoyed.