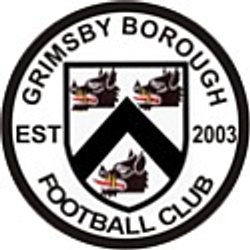 Grimsby Borough Football Club was formed when Louth United withdrew from all senior competitions on the 17th July 2003.With no competition in which to compete and no base Nigel Fanthorpe set up a meeting of the following people Ken Holmes, Tony Hopper, Paul Storer, Martin Blades, Ken Vincent and Albany Jordan to form a working committee and create a new club called Grimsby Borough. The sole aim was to ensure the standard of football stayed in the area. Nigel Fanthorpe and Stephen Newby carried on their successful managerial partnership.

Completion of the club was recognised on the 2nd September 2003 when affiliation was granted by the Lincolnshire FA.

Every year since the formation of Grimsby Borough F.C. they have played at successively higher levels in the amateur game.

In the first year Borough came second in the Lincolnshire Premier League and therefore applied to the Central Midlands League Premier Division and were unanimously accepted by the CML committee.

The following year Boro’, as the team is affectionately known, competed in the CML playing at the Grimsby Institute site. Once again, we came second in the league’s premier division but could not take up the well-deserved promotion until the ground was up-graded.

That overdue promotion came the very next season: Grimsby Borough was promoted to the Supreme Division of the Central Midlands League. Sadly, the CML team had to leave the Institute site due to ground regulations.

Local firm, Nicol, stepped in at the eleventh hour and their generous financial backing enabled us to negotiate a ground-share arrangement with Brigg Town F.C. which gave us access to the finest pitch and facilities in the area. That season ended on a high note when the club won the Centenary Junior Lincolnshire League Cup beating Skegness Town- a very proud moment for all concerned.

The club received yet another accolade when they were invited to join the North East Counties League, Division One for the 2008-2009 Season.

2008-2009 was, of course, a tough season, meeting veteran clubs such as the former nationwide team, Scarborough Athletic F.C. but the players upheld the standards we expected of them, both on and off the pitch and a tough season ended with Grimsby Borough finishing a very creditable 13th position in the league.

The following season 2009-2010 ended successfully with another piece of silverware, winning the prestigious Ashby Benovelent Cup beating Appleby Frodingham in the final 4-3 after extra time.

The 2011-2012 season was the highlight for the Club, winning their first major trophy in the Northern Counties East League. They played Shirebrook Town in the Final of the Wilkinson Sword Trophy and came out 3-1 winners after extra time after being down to 10 men, a fantastic achievement for all involved at the club.

Further seasons passed by with no more silverware, Boroughs goal was to maintain the standard of Northern Counties East League football which they have done to this day.

At the end of the 2014-2015 season long term managers and club founder Nigel Fanthorpe and Stephen Newby stood down after 12 memorable seasons.

The club then appointed Gary Precious and Andrew Thornton for the 2015-2016 season as successors but results failed to live up to expectations so Paul Walden was brought in from Louth Town. Results improved as we moved away from the relegation zone, but towards the end of the season the results dipped and relegation became a reality again. Andrew Liddle and Daniel Barrett were brought in to steer the club away from relegation. Success was achieved with a 18th place finish.

2016-2017 season was successful in terms of progress as the side got through to the play off final only to be defeated by Penistone Church.

2017-2018 season was similar to the previous season were once again we got to the play off final but were defeated by Eccleshill United. We progressed to Lincolnshire Senior Trophy Final for the second time in our history but were beaten on penalties by Holbeach United. Progress for the club had been achieved once again.

2018-2019 season was very successful, progressed to the Lincolnshire Senior Trophy Final for the second year running but unfortunately got beat on penalties to Deeping Rangers, however we bounced back and won the Norther Counties East League Division One Championship, gaining promotion to the Premier Division.

2019-2020 season in the Premier Division for the first time, we started very well and lead the league for numerous weeks, got to the 3rd Round of the FA Vase and eventually lost 4-2 at Coventry Utd having been 2-1 up with 15mins left. Form dropped off drastically after xmas and tumbled down the league to finish 9th as the league was cancelled due to the COVID – 19 Pandemic.

2020-2021 season due to start with an FA Cup match on the 1st September at Long Eaton Utd. League to start on the 19th September away at Bridlington Town.
Season cancelled in December due to Covid 19 break out.

2021-2022 season started, unfortunately losses in the FA Cup to Winterton Rangers and to Redcar Town in the FA Vase made the focus of the league the priority. By Xmas Borough were 5 points clear at the top of the NCEL Premier.