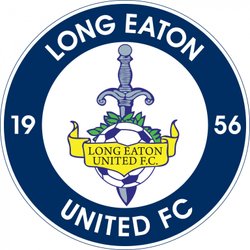 Long Eaton United has played at Grange Park, Long Eaton, since their founding in 1956. In their first season, the team - then known as 'The Stripes’ - finished second in the Central Alliance League Division One (South), behind Skegness Town.

In the club's second season, during the 1957–58 season, the Reserves won the Derby Senior League Cup, and in their third season, the senior team won the Division One (South) Championship. (At the time, Division One was the highest division.)

In 1961–62, United were admitted to the reformed Midland Counties League, and finished in a mid-table position. Fellow Derbyshire clubs Matlock Town finished as Champions and Alfreton Town finished in last place. The reserve team took the honours the following season, winning the Central Alliance Division One Championship and the Derbyshire Divisional Cup. In 1965, United won the Derbyshire Senior Cup, beating Alfreton Town 1-0 at The Baseball Ground in Derby.

Eleven years passed before United won the Derbyshire Senior Cup again, and then Matlock Town were beaten 1-0 and 2-1 to bring the trophy back to Grange Park. But the reserves brought honours to the club by winning the Divisional Cup in seasons 1970-71 and 1971-72, and the Notts Combination Premier Division Championship.

At the end of the 1981–82 season the Midland Counties League and the Yorkshire League merged, forming the Northern Counties East League as part of the ‘pyramid’ system. Because of a lack of ground facilities, United were placed in Division One (South) and - having lost a large number of players to nearby Ilkeston Town - they struggled for three seasons, until Pete Johnson became their manager. Under his guidance, United won a championship, were League Cup finalists (although they lost in a replay to Alfreton Town) and were promoted to the Premier Division.

Recent history
In 1989–90, hampered by their lack of floodlights, United moved into the Supreme Division of the Central Midlands League, and in 1990–91 were demoted to the Premier Division. In 1992–93 however, Jim Fairley Sr., who had previously resigned after suffering a heart attack, re-joined the club as its chairman, and the club reorganised.

By 1993–94, United were back in the Supreme Division under Jim Fairley Jr., who spearheaded the formation of the club's Youth Section. In 1996, United won enough money in the Lottery to fund the construction of a Centre of Excellence. They began the project in 1998, installing floodlights and fencing, and building dressing rooms and multi-activity areas. In 1997, women’s football was introduced for youngsters, and today the club has two senior teams. By 2002, Grange Park had become home to more than 200 footballers and was promoted to the Northern Counties East League Division One.

This was followed by promotion to the Premier Division at the end of the 2003-04 season.

In 2008-09, United gained a runners up spot in the Northern Counties East Premier League and were also League Cup winners that season.

In 2014–15, the club was moved laterally to the newly formed Midland Football League finishing third that season as well as lifting the Polymac Packaging League Cup beating Rocester 2-0 at Walsall's Bescot Stadium.

During that season, former Deloitte partner, Nick Dargan joined the club's management team with the remit of helping Chairman Jim Fairley and the committee develop a medium-term business and development plan for the Club. This has culminated in significant improvements to the club's facilities, incorporation as a Company Limited by Guarantee and the formation of a new Academy managed by Paul Holland.

During the 2017/18 season, Mark Clarke and Willis Francis were appointed as Joint Managers of the Men’s first team having formerly been involved within the management group at Basford United.

Paul Holland and Andy Todd took over management of the first team from December 2018, through to the end of the 2018/19 campaign, with Paul Holland reverting to managing our CFC and Academy sides for 2019/20.

Rudy Funk was appointed the club’s new manager in May 2019 but left the role early in 2020.

Ian Deakin and Craig Swinscoe, both former members of the successful Ilkeston Town management team, who oversaw back-to-back promotions, joined us in February 2020 at an exciting time for the club with significant investment in facilities taking place at Grange Park. They were joined by newly appointed first team coach Adam Campbell.

After the CFC side clinched promotion by finishing top of the table in the Central Midlands Football League Division One South during the 2020/21 season, a new management team was appointed, brothers Jake and Jack Wood. They were put in place to help guide our CFC side through the Central Midlands Football League Premier Division South prior to the start of the 2021/22 season.

As well as a significant run in the Emirates FA Cup that saw the Blues reach the Third Qualifying Round and unfortunately fall to a narrow 3-2 defeat away to Southern League Premier Division side Stratford Town FC, Long Eaton earned some incredible results of their own.

Victories came in the likes of a 7-0 win over Pinchbeck United at home, a 6-1 win over Quorn AFC away, a 3-0 win over third placed Anstey Nomads away from home and of course the final day title deciding 2-0 win over second placed Gresley Rovers.

This outstanding squad of players finished the season on 89 points, registering 28 wins, five draws and only one defeat – with the Blues’ Top Goal Scorer, Alex Marshall, bagging 27 goals in 32 league matches, and the Blues’ shot-stopper Sam Wilson earning himself 19 clean sheets out of a possible 34.

Ahead of the 2022/23 season, many ground developments were made thanks to sponsors and funding from the Premier League – a brand new extension was added to the clubhouse, a 1956 suite was built for pitch side hospitality, a new electronic irrigation system was installed on the main pitch to help with the maintenance of the grass, new seating was fitted into the main stand, our changing rooms were extended, and general maintenance was completed around the ground.

Also, as of July 1st 2022, Nick Dargan was appointed the new chairman/trustee of Long Eaton United FC, with Jim Fairley taking charge of operations and Paul Holland heading up the commercial side of the club.

Now, the Blues head into the 2022/23 season with the tough task of competing in the Northern Premier League Division One East, but it is a challenge the management team and the squad will be relishing.