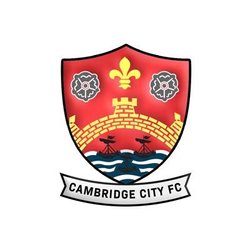 Early years
The club was formed in 1908 as Cambridge Town, the direct descendant of the earlier Cambridge St Mary’s club which had folded at the end of the 1907-1908 season following a dispute with the local Cambs FA. As a torchbearer for amateur football in the days when many clubs viewed the professional game with disdain, the new club affiliated itself with the recently established Amateur Football Association rather than the local FA. Trophy success came early, with a notable victory being achieved in the International Du Nord Trophy in 1912 after beating host club Tourquennois in Northern France. Cambridge Town amalgamated with an earlier Cambridge United club in May 1914, joined the Cambs FA, and in turn gained entry into the FA Cup and the FA Amateur Cup for the first time, whilst retaining their AFA links. The club’s best ever run in the Amateur Cup came in 1928 when they reached the Semi-Final only to lose to Leyton at Fulham’s Craven Cottage ground.

Town had some success in the Southern Amateur League and later The Spartan League, winning three league titles between 1945 and 1950, and then to the Athenian League. Cambridge was granted City status in 1951 and with it the club’s name change to Cambridge City.

Nevertheless, City were regular challengers for the title and had the highest attendances in non-league football up until the mid-1960s. But City lost their way and were relegated to Southern League Division 1 in 1967-68. Promotion back to the Premier Division followed in 1969-70, the same season Cambridge United were elected to the Football League.

Strife in the 1970s
City finished Southern League runners up in 1970-71, but the latter years of the decade were dreadful. Relegation in 1975-76 saw crowds dwindle and the Club fall into decline. In 1977, Directors decided that the club should join the Isthmian League. At the time this was seen as a backward step by many supporters. With scenes that would be repeated 30 years later, a subsequent fans’ protest forced most of the Board to resign. The club thus remained in the Southern League.

Better times
After the redevelopment of the ground in the mid-1980s, City gradually improved, and a new generation of fans mobbed their heroes after the 1985-86 Southern League Southern Division championship was won on the last day of the season. The goal scoring exploits of Gary Grogan were instrumental in City’s recovery, according him a ‘City Legend ‘status. Since the turn of this century, City have reached the First Round proper of the FA Cup four times and the Second Round once, and whilst not an outstanding record it is far better than achieved by the more illustrious City sides of the 1960s.

Ups and downs
Recent seasons have been a roller-coaster ride for the City faithful. City’s best season for 30 years saw them finish runners-up in the inaugural Conference South season in 2004-05, going on to lose in the play-offs. Off the field the ground had been sold to pay off mounting debts and matters took a turn for the worse in 2006 when the then Board announced an agreement to allow City to be absorbed into Cambridge United. With City on the brink of extinction, supporters were galvanised into a campaign which eventually forced Directors to resign, to be replaced by members of the Cambridge City Supporters’ Trust.

The opening league match of 2006-07 was arguably the most memorable since the early 1960s – not merely because City won with a stoppage time winner at Havant & Waterlooville, but because it offered irrefutable proof that that City had survived a blatant attempt to kill it off and were very much alive and kicking.

City celebrated their centenary in 2008 but were demoted at the end the 2007-08 season due to over-zealously applied ground regulations. This decision ended 22 consecutive seasons in the second tier of non-league football. City lost out to Gloucester City in the 2008-09 Play-offs.

In the 2009-10 season, City won the Southern League Cup for the first time and finished one point shy of a Play-off place. With the ground sold, a groundshare agreement was in place with Newmarket Town for the 2010-11 season but a last minute offer from our landlord meant that City had another season in its own stadium and celebrated by securing a place in the Play-offs with a fourth place finish in the league. However, this was met with disappointment again as the team lost at Salisbury City.

Another reprieve following a new deal with the landlord gave City two more seasons at Milton Road, 2011-12 and 2012-13. Once again the Play-offs were reached but again an away defeat in the Semi-Final, this time at Oxford City. This disappointment was however tempered by the news that the club has secured a site on which to build a new stadium and training complex.

City ultimately missed out on a Play-off spot in the 2012-13 season, but the club enjoyed a FA Cup run, with a televised First Round proper home tie with Milton Keynes producing a fantastic night with a nil nil draw at Milton Road before losing in the replay at Stadium MK. With our lease on the stadium finally coming to an end, April 27th 2013 saw the last ever first team match at the ground before a large crowd with mixture of tears and smiles. Adrian Cambridge had the honour of scoring the last ever goal at Milton Road in the one nil victory over Redditch United.

New era
A new era for the club commenced in August 2013 starting with a ground-share at Histon FC. City once again reached the Play-offs that season but once again tasted Semi-Final defeat, this time at home to St Albans City.

The 2015-16 season saw City move to share at St Ives Town FC. Manager Gary Roberts left in the summer of 2016 after 13 years at the club. His replacement Dan Gleeson had a short and ultimately unsuccessful spell in charge, former player Robbie Nightingale taking over as manager in December 2016. Robbie won his first game in charge to boost City’s hopes of avoiding the drop. City’s playing record improved culminating in five wins and a draw in their last six games but ultimately it was not enough, and the club were relegated to Step Four for the first time in our history. Hopes of bouncing straight back were dashed when City lost in the Play-off to Hartley Wintney. After three seasons at St Ives, City returned to Histon FC whilst waiting for the new ground in Sawston to be built.

In the summer of 2019 City were moved laterally to the Isthmian League. City’s debut season in the league seemed on course for an exciting conclusion with the club on an unbeaten seven game run in February and March, with no goals conceded, and the Play-offs were in sight. However, as well as we all know the global pandemic saw the season declared null and void as was the 2020-21 season.

With stop/start progress on the new stadium project, City had a horrendous injury list through the first half of season 2021-22 leaving them in the relegation zone going in to Christmas. A Boxing Day home game against Landlords Histon produced a 4-2 win and set the team off on a 13 game unbeaten run taking them up to mid-table and provided hope for a Play-off place. This proved to be too much for the squad but finished in a respectable ninth place considering the problems faced during the first half of the season.

With the new stadium not yet complete, City will start the season ground-sharing at Histon but with high hopes of moving to Sawston during the season .