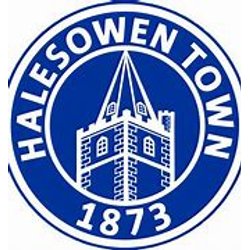 HaHalesowen Town is one of the oldest teams in the country and claims to have been formed in 1873 although without much certainty. Local historian Norman Jones wrote “there is evidence which shows that for the first ten years of the team’s existence it was the James Grove Button Factory team and that it adopted the present name in the early 1880s. The earliest records that the Football Association have on file relating to Halesowen Town F.C. are dated 1882.

When peacetime returned after World War II, the Club reformed. In season 1951/52 both Birmingham & Worcestershire Senior Cup Finals were reached. In front of a 6,000 crowd at Stourbridge, we lost in the Birmingham Final to Brierley Hill Alliance but triumphed over Hednesford in the Worcestershire Final, played at Bromsgrove. The same season saw us suffer our worst ever post-war defeat when we travelled to Merthyr Tydfil in the Herefordshire Senior Cup and were soundly beaten 0-9.

1955 brought our first major achievement when we reached the FA Cup First Round but lost 2 – 4 at home to Hendon in front of a packed Grove. In March 1955, Ronnie Dugmore notched an incredible seven goals when we won 10-0 at Dudley in a Birmingham League match. In August 1957, we achieved our highest post-war winning margin when we beat Coventry Amateurs 13-1 in the Birmingham Senior Cup.

The 1970s brought a period of struggle for The Yeltz. Twice out of three successive seasons we finished bottom of the West Midlands League. At times, the only thing keeping us running was the effort of 'Mr Halesowen Town' - Harry Rudge. Before his untimely death in 1990, 'H' filled every role in the club at one time or other, including player, manager, groundsman, secretary and anything else you can think of.

Not to worry, two years later we were back at the ‘Home of Football’. This time there was no mistake, as we beat Fleetwood 3-1 in the greatest day in the history of the club. By the next year we were getting a bit blasé about the whole thing, as we once again won the Vase by beating Southall 3-0 in front of over 17,000 people, most of whom had come down from Halesowen.

From 1985 to 1991, Halesowen reached the First Round of the FA Cup for seven consecutive years. On four occasions we played professional teams, and each time we were unlucky to lose. SOUTHEND beat us 4-1, but were extremely flattered by that scoreline, breaking away in the last five minutes to clinch the game after we had been all over them in the second half. We lost 2-0 to BRENTFORD, again in a very even game. Against CARDIFF CITY, we lost 1-0 to a hotly disputed penalty and were by far the better team and lost 2-1 to an excellent TRANMERE ROVERS side after taking the lead.

Season 2010/11 saw one of the poorest playing records in the Club's history finishing the season in bottom place, scoring only 24 goals and conceding 107. Shortly after the season ended, the Club was taken over by businessman Steve Lynch. Under the new ownership, season 2011/12 brought an encouraging start with The Yeltz undefeated in the first five league games, including a 3-1 home win over eventual champions Bideford. However, September brought early FA Cup exit at Rocester which was soon followed by a morale shattering 4-5 reverse at Wimborne, where a 4-1 lead was squandered in the last half-hour. An October FA Trophy loss at home to Romulus lead on to a bleak winter for Yeltz fans. In the autumn Steve Lynch had formed a management team to run the club on his behalf and under the Chairmanship of club stalwart Colin Brookes and Vice-Chairman John Russell, a lifelong Yeltz fan of 60 years. This brought fruition as the last three months of the season progressed, the club's improved off-field organisation led to Manager Shaun Cunnington being able to strengthen his squad. Neil Barnfield served an impressive spell on loan from Leamington while striker Ben Haseley arrived from Heath Hayes and soon won fans over with 10 goals in 17 games.

2013/14 season kicked off with an away win at Lincoln, quickly followed by two successive home defeats within seven days. All at Halesowen then couldn’t envisage what the rest of the season would bring. Our leading goal scorer from last season Ben Haseley missed 11 games due an eye injury, but on his return against Brigg scored twice. As the season progressed we climbed the league table and went top. This position we help until the final week, with Coalville close behind and a game in hand lost against Gesley, this meant our last game away at Belper was a must win game for us to be crowned League Champions. Two goals from Ben Haseley ensured the three points that crowned us league champions and promoted to the Premier League. The Peter Swales Challenge Trophy was added the following week, with a 3-1 win against Curzon Ashton. John Hill added to his squad two players with league experience, Neil Mackenzie and Iyseden Christie.

Fast forward to 2018 and following Steve Lynch’s FA imposed ban from all football activities Club President and ex-Chairman Colin Brookes became the ultimate owner of the club with his daughter and chair Karen Brookes and Keith McKenna becoming Directors of the Club. The Yeltz narrowly avoided relegation and for the 2018/19 season played in the newly formed South Premier Division Central.

In November 2018, the new management team of Rob Smith and his assistant Larry Chambers were appointed to replace John Hill and Matt Clarke, sadly the 2018/19 season saw relegation to Step 4 for the Yeltz with Lee Hughes and Asa Charlton at the helm.

Paul Smith took over as manager in the summer of 2019 as he looked to get the Yeltz back to Step 3 at the earliest opportunity.

The Yeltz were looking at promotion back to Step 3 when the Covid 19 pandemic stopped football and the world in its tracks as the league results were expunged and the league declared ‘Null and Void’. The Yeltz also reached the Semi-Final of the FA Trophy.

The 2020/21 season was but twelve games old when the season was curtailed, again due to the worldwide pandemic.

Last season 2021/22 Halesowen Town were places into the newly formed Pitching In Northern Premier League Midlands Division and was Paul Smith’s first full season in charge of the Yeltz and despite never losing touch with the top six all season were narrowly defeated in the Play-off Semi-Final.

Attendances were steadily on the up and an average of over 1,000 fans per game came to the Grove.