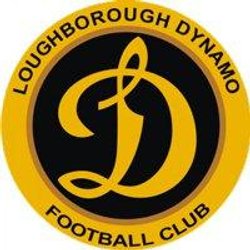 Loughborough Dynamo FC is a member of the Northern Premier League, playing in the Midlands Division. The club plays at the ADT Stadium in Watermead Lane, Loughborough, Leicestershire.

The club’s name comes from FC Dynamo Moscow, which had played in the United Kingdom in friendly matches on tours in both 1945 and 1955. The club colours of gold and black come from Wolverhampton Wanderers, who played against Dynamo Moscow at Molineux on November 9th, 1955.

It was at its current home that the club was playing in the Leicestershire Senior League Division 1, but the facilities were not good enough to enable promotion the Premier Division. The specific requirement was floodlights. It was then that discussions took place between the club and Loughborough University, the education facility was looking to integrate into the local community, and the offer was to develop, with Dynamo, the facilities at the NSG. Also, James Ellis came on board as manager. All this occurred in the early 2000’s and enabled the club to gain promotion to the Premier Division and start its development to where it is today.

Dynamo stabilised in the MFA, and then came the memorable season of 2007-08 when under the management of Adam Beazeley, assisted by John Folwell and Simon Tebbutt (James Ellis having moved on), the club achieved promotion to the Northern Premier League Division One South.

Tom Brookbanks became Manager in May 2013, and by the start of the 2014-15 season had built an entertaining side, and in September of that season Dynamo topped the division, the highest position in the club’s history. But off fields matters came to a head the following month and the management team and squad was suddenly ripped apart, and the club slid down the table.

The following two seasons were not easy on the pitch, finishing 20th in both the 2015-16 and 2016-17 campaigns, one place above the relegation positions. In the latter season the experienced Peter Ward took over as Dynamo’s Manager just after Christmas 2016 and steered the club to its own ‘Great Escape’, winning the last four matches of the season (the first three of those matches being away, two to the other clubs involved in the relegation battle) to finish four points clear of the relegation places.

Under Peter’s Management Dynamo finished the 2017-18 season fifteen points and six places better than a year previously, as well as reaching the Leicestershire Challenge Cup, going down 7-6 on penalties to Premier Division Coalville Town, after the game finished 2-2. Peter felt this was the best time to move on with Peter’s Assistant, former Dynamo player Lee Attenborough, stepping up into the Manager’s post. Lee has previous managerial experience at Leicestershire Senior League Sileby Town and East Midlands Counties League side Ashby Ivanhoe.

Lee’s first season in charge had its ups and downs but a strong finish, in which Dynamo won all of their final six games resulted in Dynamo finishing eighth in the league, only six points off a play off place.