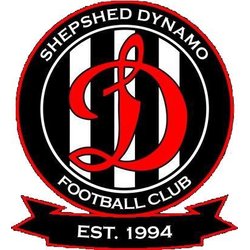 Shepshed, in NW Leicestershire, has had football teams associated with it since 1879. Whilst many of these achieved local recognition over the years, it was with the formation of the Charterhouse club in the mid-1970s, that the name of Shepshed became known nationally.

Between 1978 and 1984, the club rose from the lower reaches of the Leicestershire Senior League to the summit of the Southern League Premier Division, winning seven consecutive promotions (including six successive championship titles) on the way. They also reached both the Semi-Final and Quarter-Final of the FA Vase, as well as the First Round Proper of the FA Cup. Unfortunately the club, then known by its original name of Shepshed Albion, closed down in 1994.

1994 to 2004
The current Dynamo club was formed in the summer of 1994. Initially playing in the newly formed Midland Alliance, the club enjoyed a successful first season, finishing fourth. The following season, under Manager Mark O'Kane, the club won the title by eight points including a remarkable 23 game unbeaten start. After a hectic summer of improvement works, the club took up their place in the Southern Football League for the 1996/97 campaign.

Whilst league success proved harder to come by the club more than made up for this in the FA Cup by reaching the First Round Proper. Despite a heavy away defeat at the hands of Carlisle United, the memory of the day will live long with all that were there.

The second season proved less successful, and with the team struggling near to the bottom of the league, O'Kane was replaced in February 1998, by John Hanna. The change brought a creditable 16th place by the end.

1998/99 saw the best league season to date. Shepshed were in the top six of the league for most of the season, but slipped to a final placing of 10th, after a poor run-in.

1999/2000, the Centenary year for the club's ground "The Dovecote", saw a season-long battle against relegation, a final placing of 18th and the resignation of Hanna in July 2000. His assistant, Dave Williams, was appointed.

His first season in charge saw a 15th place finish. The next two saw the financial purse strings tightened, however whilst Shepshed flirted with relegation, a 16th place position was recorded in both.

The summer of 2003 saw a change in the constitution of the football club that led to it becoming a private limited company. However, in footballing terms, the season can be fairly described as disastrous, as it saw two changes in management after Williams was sacked in October and his successor Dave Clay resigned in January. Pete McGurk then took charge of first team matters but despite improved results, he had insufficient time to prevent Shepshed from finishing bottom of the Southern League Western Division.

However, restructuring in the summer of 2004 reprieved Dynamo and saw them start their 10th anniversary season as members of the UniBond League. McGurk led the team to a respectable 15th place finish in a season that also saw them win the Loughborough Charity Cup and Coalville Charity Cup double.

2005 to date
Season 2005/06 culminated in a fine 10th place finish and saw the club receive the UniBond League Club Of The Month Award, Fair Play Award and Goalscorers Award for April 2006. Dynamo also reached the finals of both the Loughborough and Coalville Charity Cups.

McGurk resigned in December 2006, with the club in 15th place, replaced by his assistant Adam Stevens. He resigned in April 2007 after a 1-6 defeat at second-bottom Chorley left Dynamo in 20th place (fifth bottom). Former Belper Town manager Martin Rowe was appointed in May 2007, however his reign was to last only until November, after a dismal start to the season.

The 2008/09 season saw fortunes dramatically change for the better, with Shepshed ending the season in 8th place, their highest league table position for 13 years, however Wilson resigned immediately after the end of the season. Dave Stringer and Jimmy Ginnelly were announced to lead Shepshed into the 2009/10 season, but following a difficult season, Dave parted company with Shepshed.

Barry Baker and Bob Norris were appointed for 2010/11. As the season started Baker was hit by a serious illness and forced to resign. Dynamo appointed Dave Frecklington, but this again failed to last, and he was relieved of his duties after a string of poor results that saw Shepshed finish in 21st position leading to relegation.

However Shepshed were reprieved following financial problems at Rushden & Diamonds. John Ramshaw was appointed the new manager as Evo-Stik NPL Division One South football was awarded to Shepshed for the 2011/2 season. In October Eastwood Town persuaded Ramshaw to take over their hot seat. His assistant Chris (Chalky) White was given the post in November 2011.

In 2012, with new Chairman Mick Sloan, Shepshed Dynamo competed in the United Counties League, where after a mixed start ended the season on a high finishing in 9th position and beating local rivals Quorn FC 5-0 to lift the Loughborough Charity Cup.

In 2013/14 Shepshed were yet again moved sideways to compete in the Midland Football Alliance and after a season of mixed results finished in16th place. Jim Wynne and Matt Houldsworth began the campaign with a mix of old and new players signed. In November they were replaced by the successful championship winning Jeff Stocking from Oadby, strengthening the squad but finished the season in 15th place.

For the 2014-15 season Jeff was joined by former Loughborough and Quorn manager John Folwell and they recruited a squad of talented young players who enjoyed an unbeaten pre-season. Due to business requirements Jeff stood down with John being joined by Jimmy Gray. Before the completion of that season however John also had to resign due to promotion at work. Jimmy Gray saw out the season, helped by Andy Hohn, and the side finished fourth.

The management team for the 2016/17 season assembled the bulk of last season’s successful side and a mix of experienced players with a group of promising youngsters. Although staying in the higher end of the league for most of the season, including reaching the last 32 in the FA Vase and winning the Loughborough Charity Cup, the club finished fifteenth.

For the 2017-18 campaign again a mix of the previous season’s players plus experienced additions were to represent the club with hopes of a much higher finish in the league table. A competitive season ended with a 7th position but also the loss of manager Gray.

This saw ex-Gresley manager Damion Beckford-Quailley take charge and a squad comprising some of last term’s players joined by new faces and several ex-Shepshed favourites returning to the Dovecote.

The FA allocation to leagues for season 2019/20 saw the club again moved to the United Counties for a second time. Damion remained as manager, assisted by Wayne Scott and Dave Clay. Several new faces were included in the squad.

Season 2019/20 saw the club in a very strong position for promotion before the Covid pandemic caused the season to be null and void. With a late start, 2020/21 was a busy one with the club retaining most of the squad and being joined by three additions and increased coaching staff.

Despite this, during the FA restructuring, we were finally promoted back to Step 4 via the PPG system after over 10 years at Step 5.

In the first season back at Step 4 Dynamo Manager Damion Beckford-Quailey, assisted by Gary Drake, managed an impressive 11th placed finished, whilst also beating many of the top finishing teams in the process.