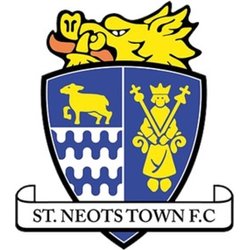 St Neots Town was formed in 1879 when it was known as plain 'St Neots'. The club clinched its first honour when it became inaugural winners of the Huntingdonshire Senior Cup in 1888–89. They went on to win the cup another four times before the turn of the century in 1892–93, 1894–95, 1895–96 and 1896–97. In the 1901-02 season the Club recorded its first known ‘double’ when it won the Hunts Senior Cup, for the sixth time, and the Fellowes Cup. During this period they played in the Biggleswade & District League.

In 1956 they switched leagues again, joining Division One South of the Central Alliance. The following year the club was renamed for the third time to its present name St Neots Town F.C. In 1960 they returned to the Metropolitan League and won the Professional Cup in 1964–65. In 1966–67 St Neots enjoyed their best run to date in the FA Cup reaching the First Round proper, where they were beaten 2–0 away at Walsall. They went on to win the United Counties League and League Cup double in 1967–68 after re-joining the season earlier. The following season they retained the League Cup and also won the Huntingdonshire Senior Cup for the twelfth consecutive season, a record for senior cups in England.

In 1969 the club transferred to the Eastern Counties League because it was felt it would be a stronger league, but returned for a fourth spell in the UCL Premier Division in 1973. They were relegated at the end of the 1981–82 season after eight years of moderate success but made an immediate return the following season after finishing as runners-up in Division One. During the 1987–88 season the owner of their long term home at Shortsands yard sold it to a housing developer, meaning the club had to finish the season on a sub-standard borrowed works pitch. At the end of the ‘87–88 league season just four places from the bottom of the league table the club was forced to disband in order to clear its outstanding debt.

Out of football for just two seasons St Neots Town FC was reformed, in 1990, by a group of local men and joined the Huntingdonshire Junior League, with a pitch at Priory Park, which was rented from the district council. After four consecutive titles and a six-year absence from senior football, they were readmitted to Division One of the UCL in 1994. They won Division One at the first attempt and were promoted to the Premier Division, where they would stay for the next 17 years.

The club's ambition to move on was shown with the 2009 addition of former Northern Ireland internationals Steve Lomas and Michael Hughes as a player managerial team, where they were joined by Sylvain Legwinski, formerly of Fulham.

Whilst these star names moved on, new manager Dennis Greene was able to bolster his side in late 2010 with the audacious signing of former Aston Villa striker Stefan Moore, fresh from scoring 39 goals for higher-level Halesowen Town. Moore helped fire St Neots to the 2010–11 UCL Premier Division title, with the club breaking a number of records on the way to promotion to the Division One Central at which they won as Champions at the first attempt. However, a series of management changes were to follow. At the start of the 2012–13 season manager Greene's position had become "untenable" leading to his resignation. He was replaced first by Iain Parr, before a joint management team of Gary King and Zema Abbey were drafted in from Arlesey Town in November 2013. The new management team led the Saints to victory in the Hunts Senior Cup and the 2013/14 Southern Football League Cup, with victory over Tiverton Town in the Final.

Poor performances at the beginning of 2014–15 season, however, saw the Abbey brothers, Nathan and Zema relieved of their duties. Gary King became the sole manager, bringing in Liam George as his assistant and promoting Matthew Spring to player/assistant coach. King resigned in late December 2014 and was replaced by David Batch. In December 2015, owner and chairman Mike Kearns stepped aside with his stake in the club acquired by the club's managing director, and Kearns' son, Lee.

In 2016 the slow transition to becoming a self-funded, sustainable community active club began with the introduction of a new board of directors.

Relegation to step 4 in 2019 was followed with the introduction of a strategic development partnership with Cambridge United FC. The clubs ambition remains the same, to play at the highest level possible while remaining self-funded with a drive to make a difference within the Community.

For the 2022-23 season the Club will play in the Northern Premier League having been laterally transferred from the Southern League.