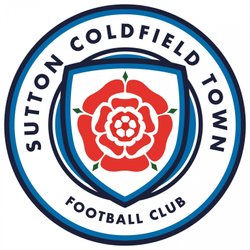 The football club associated with Sutton Coldfield was formed in 1879 with the first game taking place on the 1st of February at "Meadow Plat" in Sutton Park when the club lost 6-2 to Birmingham. The club moved to its present ground in Coles Lane in 1920.

From just after the Second World War until the early 1980s, the club played its football in regional leagues in the area, including Walsall Senior, Birmingham Comb, Birmingham Senior, Worcester Combination, Midland Combination and West Midlands Leagues.

In 1980-81 we reached the First Round proper of the FA Cup for the first time in our history and were drawn at home to Doncaster Rovers of the then Fourth Division. In front of a record crowd of over 2.200 at Coles Lane we played well but were defeated 2-0 with two late goals.

In 1982-83 we joined the Southern League following the introduction of the revised football pyramid. We secured promotion to the Premier League after finishing runners up to Cheltenham Town.

Relegated the following season and then remained in the Southern League at step 4 until 2010-11.

In 1992-93 we reached the First Round proper of the FA Cup for the second time in our history and were drawn away to Bolton Wanderers of the then Second Division at Burnden Park. In front of a crowd of over 5,000, a major shock was on the cards when a late goal for Sutton was ruled out for offside and the game finished with a 2-1 win for Bolton who were promoted that season and also reached the Fifth Round of the FA Cup winning at Anfield along the way.

In season 2007-08 Sutton lost in the play-offs to eventual winners Stourbridge and in the following season 2008-09 missed out on the play-offs on goal difference when Chesham United equalized two minutes from time against Bromsgrove Rovers.

In season 2010-11 we were moved by the FA into the EVO-STICK Northern Premier League Division 1 South and again missed out on the play-offs finishing sixth for the third year in a row.

In 2009-10 and for the first time in our 132-year history we won the Birmingham Senior Challenge Cup beating Nuneaton Town 1-0 in the Final.

2011 saw the installation of the 3G artificial pitch at Coles Lane.

In September 2012, Chris Keogh stepped down as manager after 12 years and joined the Board, his assistant Neil Tooth taking over as manager.

In 2014-15, the Club took the big step of changing the status of the club from a Members Club to a Company Limited by Guarantee.

In the same season, we earned a play-off berth by finishing fourth in the regular season. In the Semi-Finals we travelled to Newcastle Town, who had finished third, and came away with a 3-1 win. This put us in the Final, away at Leek Town, who had finished second. This turned out to be a great game and Sutton scored a very good 2-0 victory to get promoted to the NPL Premier Division. The last time we had played at level 3 was some 30 odd years ago in the Southern League.

Season 2015-16 was a new experience for us, after promotion via the play-offs, to the Premier Division. Many people were saying we would immediately get relegated, but the team proved them all wrong. After a steady start of 3 draws and 2 losses in the first 5 games, we hit a purple patch over the next 9 games, winning 7, drawing 2, putting us second place in the league. Following a number of injuries, we slipped down the league to finish a creditable 12th. In the FA Cup we were knocked out in the First Qualifying round by Oadby Town but in the FA Trophy we were more successful, when we reached the First Round proper only to lose to National League side Barrow AFC 1—0 to a late goal.

After a poor start to season 2016-17, Sutton struggled to pick up points and were knocked out of the FA Cup and Trophy in the early rounds. A difficult decision was made and the club parted company with the management team having won 3 and drawn 5 of the 20 league games played. Despite some improvement in form we remained in the bottom four for almost the entire season and went into the last game needing to better Corby’s result to survive. A tremendously spirited performance earned a point with a 0 – 0 draw at much fancied Workington and with Corby losing at Coalville survival was ensured.

The 2017-18 season mirrored that of the previous year; again, Sutton struggled to pick up league points and were knocked out of the FA Cup and Trophy in the early rounds by lower league teams. At the beginning of 2018 with the team having only 5 wins and 5 draws from 29 games and a goal difference of minus 48 the decision was once again taken to change the management. Neil Tooth (Toothy) was reappointed with a new management team and reinvigorated the team doubling the number of wins and being competitive in almost all the remaining games. However, the deficit inherited was too great and relegation became something of a formality.

Relegation saw us competing in the Southern League Division 1 Central for the 2018-19 season. ‘Toothy’ completely rebuilt his squad and, unsurprisingly, this took time to come together and there were some early season disappointments. However, given a little time, and how often have Managers at all levels craved for that, the new squad with its balance of experience and youth got to grips with the league and two very good runs in the season saw us finish 5th and qualify for the play-offs. This saw us lose 3–2 after extra -ime to Bromsgrove Sporting in front of a crowd of 1,850 in what was possibly the best and most exciting game of the season. Other highlights were a good FA Cup run which saw us beat Rushall Olympic of the South Premier League Central after a replay before losing to Alfreton Town of the National League North in another replay. We had a little earlier lost on penalties to another National League North Team, Leamington, in the Birmingham Senior Cup. Our last game of the season was against Boldmere St. Michaels in the Final of the Walsall Senior Cup where we lost 2 – 0. Coming so close after the play-off Semi-Final this just proved a game to far for the team.

With a further revision of the National League Structure the 2019-20 season saw us back in the North/East section after one season away “down south”. This was an opportunity to re-acquaint ourselves with a number of former adversaries, while for many of the Club Players, Officials and Supporters it was an opportunity for a number of first-time visits to some Clubs. Again, ‘Toothy’s’ philosophy for the season was to blend experience with the continuing development of, in particular, U21 players and many were given the chance to play at senior level. We had considerable success in the FA Cup with a win over Gresley Rovers, while Redditch and Kettering were beaten after replays. The dream ended with a 1 – 0 defeat to a very good Boston United team in the Third Qualifying Round. There was some success in the FA Trophy with wins over Yaxley and Stafford Rangers before a defeat at the hands of Hednesford Town. The League season started slowly, the cup runs taking a toll, but the results improved as the season progressed including six wins on the bounce in February and March and gave hope that the final weeks of the season might see a play-off place. However, it wasn’t to be and in March the season was terminated, and all football activity ceased with the onset of the Covid pandemic.

Sadly the 2020-21 season was significantly compromised by the continuing COVID-19 pandemic which had a significant impact on all clubs; not just from a playing perspective but survival became a real issue for many across all levels of football. The season didn’t start until September and was curtailed and then cancelled in November. We had a slow start losing the first games in both the FA Cup and FA Trophy, while only 7 games were possible in the league and we finished with a record of 3 wins, 2 draws and 2 defeats.

After losing last season we approached 2021-22 with anticipation, expectation and a little trepidation. Budgets had been compromised due the closure of facilities, after two difficult seasons a number of players had retired or moved on and some supporters (the life blood of clubs at our level) were uncertain about attending games. Nevertheless, we retained key players from the previous year’s squad, with a number of former U21 players maturing well and putting themselves in contention. As always, our Manager, ‘Toothy’, was watching the local scene and made some key signings. During the lockdown the Board continued to invest in the Club’s future with a number of facility improvements and a commitment to other long-term developments. We also looked to continue the total development of the club as the Ladies and Junior sections went from strength to strength and continued our commitment to working with the local community.

2021-22 began with a 2-0 home win against Soham Town, which proved to be one of only a handful of wins in 2021 in what became a difficult season for the Royals. Under Neil Tooth’s leadership only one more win was recorded before the end of October against Sporting Khalsa and following a 5-1 defeat to Ashton United in the FA Trophy resulted In ‘Toothy’ and his assistants resigning as the management team. Ross Thorpe was appointed as the new manager following a short stint as interim manager, with Steve Hinks later joining as assistant. A resurgence in December saw the Royals record their first away wins at Soham Town and Coleshill Town and further wins at home against Stamford and Shepshed also followed. The key game to avoid relegation came in a home tie which saw an incredible attendance of 823 witnessed a crucial 3-0 win against fellow strugglers Wisbech Town. This run of results helped the Royals beat the drop with games to spare on 37 points.

On guaranteeing Step 4 for the Royals, Ross Thorpe resigned as first-team manager to follow other career options. The Royals appointed former Chasetown and Shepshed Dynamo manager David Stringer to take the Royals forward in the 2022-23 season. As well as a new management team, it was also an important pre-season for the Royals as the 3G pitch has been replaced following the original being installed back in 2011 along with the new LED lights and a refurbished main stand ready for the 2022-23 season. We look forward to the challenge ahead in the new season under David Stringer.