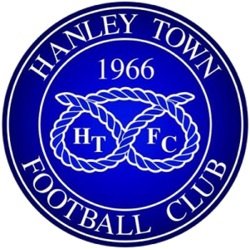 In 1966 a group of friends were playing mainly friendly games on a Sunday based at The Trumpet Public House in Hanley. (The building is now occupied by McDonalds, facing the Wetherspoons pub).

The friends decided to join a Saturday league (Longton League) and changed their name to Hanley Town (Owen Rhead took on the mangers role in 1966). That very first season the club won the Longton League and the Longton Charity Cup. The team were playing on a pitch rented from a local engineering firm Copestick & Farrell on Victoria Road just outside Hanley.

In the 1967/68 season the club moved up to the Staffordshire County League (North) and were placed in Division 2, a reserve team was formed and replaced the first team in the Longton League. The season was one of the most successful – the combined teams winning six trophies and were runners-up in two others. Washing and changing facilities were built at the ground making the club one of the first in the area to have touchline facilities.

The success continued for the ‘68/69 season with the first team becoming Division 1 Champions and the reserves retaining the Longton League title. Also won were: Longton League Cup (vs Fenton BL); the May Bank Cup (vs Wereton QP) and the Hanley Cup (vs Wereton QP). The first team were also runners-up in the Staffordshire Junior Cup (vs Pelsall Villa).

In 1971 the club lost its ground on Victoria Road to developers and so the club moved into a groundshare agreement with neighbours Eastwood Hanley, who were playing in the West Midlands League at the time. The reserves were able to continue to rent a ground from Johnsons nearby. Both Hanley teams were now playing in the Staffordshire County League (North), the first team in the Premier Division and the reserves in Division 1.

The ‘72/73 season saw the first team became Premier Division Champions, with the reserves finishing third in Division 1. The Staffordshire FA Challenge Cup was won beating Roebuck in the Final.

With Eastwood wanting to increase the rent for the 1974/75 season to an unacceptable level the club agreed a groundshare with Leek Town. It was a disappointing season on the field, the first team finishing 5th in the County Premier Division, with the reserves finishing 12th out of 14 teams in Division 1. The club were runners-up in two cup competitions the Sentinel Cup and the Roger Lomas Trophy.

For the 1976/77 season under the managerial reins of Joe Wills, Hanley Town moved into their present ground on Abbey Lane where the club started to develop the facilities. The club also took the plunge into joining the Mid-Cheshire League Second Division which was in its second season.

The 1980/81 season was a disappointment as the club finished in its worst league position. The cup competitions though were a success however – the new Staffordshire FA Vase was introduced by the Staffordshire FA to replace the Intermediate Cup, 16 clubs from North and South of the County were invited to take part. Hanley Town had the honour of being the first winners defeating Chasetown over two legs, the first-leg away at Chasetown ended 0-0, with the return leg at Abbey Lane, in front of 1,000 spectators ending 2-1 to Hanley. The League Cup was also retained after beating Linotype 2-1.

In the 1981/82 season the club finally became Mid-Cheshire League Champions by a six-point margin and only two defeats in the league all season. The clubs attempt to defend the Staffordshire FA Vase was almost successful as we reached the Final again, only to lose over two legs 2-0 to neighbours Eastwood Hanley.

The following three seasons were mediocre, but in the 1986/87 and 1987/88 seasons under the managerial reins of Peter Ward – the seasons provided the club with some success. Two third place finishes in the Mid-Cheshire League; League Cup success beating Kidsgrove Athletic 3-1 after extra-time; winning the Leek Cup; the Newcastle Charities Cup and the club were also inaugural winners of the Congleton Floodlit Cup. The reserves during this period were Staffordshire Alliance League Premier Division Runners-Up and Premier Division Cup winners. The club started a youth team, the team playing in the Staffordshire County Minor Youth League – they finished Runners-Up in the league, won the Subsidiary Cup and won the Sentinel Shield.

In 1988 the club applied for membership of the North West Counties League, but with new ground grading being introduced at the time, the club failed in its application. With the club’s application turned down, the first team left to play at a higher level for Nantwich Town who were in the North West Counties League at the time. In 1988/89 ex-Stoke City, Port Vale and Crewe Alexandra player Terry Lees was given the task of rebuilding an entire new first team, and over the next few years began to assemble a team that was gradually climbing the table. Terry had to step down in 1993 due to other commitments outside of football.

Thereafter, in this period, began a slow decline, to which the club nearly folded in 1995.

Then ex-Port Vale player Neville Chamberlain, first as manager, then as chairman steadied the club. The club returned to the Mid-Cheshire League for a season and then in 1998 joined the Midland League (Staffordshire County Senior League).

Under the managerial reins of Darren Stair and Dave Price, the Midland League Cup Final was reached in 2003/04, unfortunately losing to Norton/Adderley Green in the final. The club had had to wait till the turn of the millennium to reach a major cup final (15 years).

Success was finally achieved the following season when Darren and Dave guided a young Hanley Town side to a treble of titles: Midland (SCSL) Champions; League Cup Winners (vs Hanford 2-1); Staffordshire FA Vase (vs Audley 1-0) and the reserves won the Leek Cup (vs Audley 4-2).

The following season the club retained the league title, losing just once in the league, however losing to Ball Haye Green in the Leek Cup Final.

Between 2006 and 2011 Steve Norris (FA Trophy winner) and then Dave Wooliscroft took on the managerial reins – consistently keeping the team in the top five of the league and onto a number of cup semi-finals.

For the 2011/12 Darren Stair’s brother, Colin Stair took over as first team manager after a successful few seasons as reserve and youth team manager – he was assisted by Dave Price and Glen Parkes.

With four league games remaining in the season, first team manager Colin Stair suddenly passed away, the lads brilliantly saw the season through to win the fourth title for ‘Codger’.

It was Colin’s ambition to get the club and manage at a higher level starting with the North West Counties Football League, which the club achieved by being accepted into the First Division of the North West Counties League for the 2013/14 season. The first season at a higher level resulted in a fourth place, with Hanley also reaching the final of the NWCL First Division Trophy, unfortunately losing on penalties to Formby.

The 2014/15 season saw the first team reach the NWCL Division 1 play-off final against AFC Darwen after beating Holker Old Boys at Abbey Lane 3-1 in the Semi-Final. Unfortunately, Hanley went on to lose the final at Darwen’s Anchor Road ground in front of over 900 spectators.

The 2015/16 season saw the first team banish the disappointment of missing out on promotion the season before by becoming the North West Counties League First Division champions under the new management team of Dean Owen and Wayne Johnson in their first season in charge.

Hanley’s first year in the NWCL Premier Division (2016/17) saw them finish in a respectable 10th place.

In the 2017/18 season, Hanley finished in 8th place in the NWCL Premier Division.

The 2018/19 season was a turbulent one for the club, both on and off the field, with Hanley needing (and getting) a win on the last game of the season in order to secure safety in the NWCL Premier Division. Hanley ended the season having had three different managers throughout the season, with former player Mick Morton being the latest recruit in January 2019. Mick successfully kept the club up, turning the clubs form right around towards the end of the season.

The 2019/20 season was cut short and later voided due to the Coronavirus pandemic. With eight games still to play, Hanley were sitting bottom of the table, and in the sole relegation spot, but were only one point behind the team above and with a game in hand on them – everything still to play for. Sadly, 2020/21 also went the same way with few games played.

In 2021/2022 the club made it as far as the FA Third Qualifying Round bowing out to National League North Brackley Town after a replay 1-0. The icing on the cake though was winning the Midland League Premier Division earning promotion to the NPL West Division for the 2022/23 campaign.