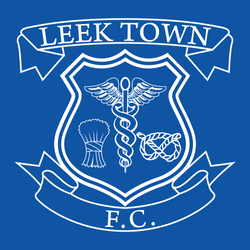 Although some say the origins of Leek Town go back as far as 1876, the history of the club as we now know it begins in 1946. Starting out as Leek Lowe Hamil in the Leek and Moorlands League and progressing to the Staffordshire County League, where they still hold the record of being the only team to win the championship without the loss of a match in 1949/50. On moving into the Manchester League in 1951/52, they became Leek Town and won the championship at the first attempt. After a brief flirtation with the Birmingham League in 1954/55, they moved back to the Manchester League and eventually back to the Staffordshire County League.

It was 1968 when Leek Town started to become the club it is now. The ground was improved adding a clubhouse, small stand and floodlights. Manager Paul Ogden led the team to success in the Staffordshire County League and the Manchester League before joining the Cheshire League in the 1973/74 season and winning that championship at the second attempt. The chairman at the time was the late Geoff Harrison, after whom Harrison Park is named. Leek became founder members of the North West Counties League in 1982 but had little success.

When the Northern Premier League First Division was added in 1987/88, Leek were founder members. After two seasons finishing third, they were promoted to the Premier Division on topping the First Division in 1989/90. This season also saw them reach the FA Trophy Final at Wembley, where they lost 3-0 to Barrow. This was a historic achievement, as no other side from that level of the pyramid had ever done so previously. The success, all under the guidance of manager, Neil Baker, continued in the following season in the form of an FA Cup run where they defeated Scarborough in the First Round Proper and forced a replay against Chester City in the Second Round.

Leek’s second place finish in 1993/94 should have been enough to see them promoted to the Vauxhall Conference. Instead, they were rewarded by being shunted sideways to the Southern League, as they were denied a place for financial reasons. They enjoyed a fairly successful campaign, finishing in 7th place, but due to the crippling financial commitment, requested a move back to the Northern Premier League. Success followed shortly as they won the championship in the 1996/97 season and were promoted to the Conference. The club managed to retain its Conference status at the end of the first season, a feat that required them to play six matches in the final eight days of the season. The following season proved one too many and relegation back to the UniBond NPL Premier Division resulted.

The relegation saw a complete change in the playing staff, with a side of mainly local players. The team struggled and was relegated again at the end of the 2000/01 season to the UniBond NPL First Division. Following the league restructuring at the end of the 2003/04 season, Leek returned to the Premier Division where they finished in 7th position. In the following three seasons Blues struggled against relegation and after two great escapes they succumbed in the 2007/08 season.

Relegation saw a complete rebuilding of the side, but under manager Wayne Johnson and then Neil Cox they failed to reach the promotion Play-offs. Neil Baker took the reins briefly in 2011 before returning to Crewe Alexandra, his assistant Lee Casswell took charge and led the Blues to the promotion Play-offs three times in four seasons, losing twice in the Final against Ilkeston FC in 2012 and Sutton Coldfield Town in 2015. Lee remained in charge until April 2016 when Anthony Danylyk stepped in as player/manager and continued in the 2016/17 season.

Neil Baker returned at the start of 2017/18 and in his first season narrowly missed out on a Play-off spot. The following season 2018/19 Leek Town finished 3rd, and after beating Colne in the Semi-Final, they narrowly lost to Radcliffe FC in the Final after beating their opponents twice in the league campaign.

In 2021/22 the Club was moved from the NPL East to the NPL West with the re-organisation at Step 4, they also changed their playing surface to 3G which saw a revamp of the already impressive stadium, despite having to play away from home until mid-October Neil Bakers side finished 3rd and progressed to the Play-offs. They then lost at home in the Semi-Final to Runcorn Linnets who in turn beaten by Marine in the Final.