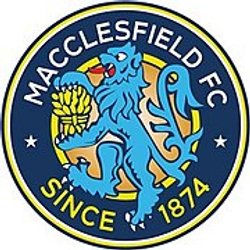 Experienced striker Nicky Maynard has joined Macclesfield ahead of the 2022/23 campaign.

Macclesfield have announced that forward Bobbie McDonnell has completed a move to NWCFL Premier Division side Vauxhall Motors.

Macclesfield have announced the capture of defender Dan Cowan following his departure from Buxton.

Macclesfield have announced the signing of former Bootle defender Will Bell.

Macclesfield Football Club is a successor to Macclesfield Town FC which was founded back in 1874.

Macclesfield Town was liquidated and expelled from the National League in 2020 because of debts of over £500,000. Its assets were put up for sale - including the Moss Rose Stadium on the Rightmove property website.

In October 2020, the Stadium and all remaining assets were purchased by Robert Smethurst with the aim of returning professional football to Macclesfield by creating the phoenix Club, Macclesfield FC.

In addition to this, Smethurst also invested heavily in upgrading the Stadium to improve the commercial viability of the new Club. At the time of writing, the investment stands at over £4 million.

In May 2021, it was announced that Macclesfield FC would be placed in the NWCFL Premier Division for their inaugural season.

Robbie Savage also announced that the Club would be partnering with his Foundation in order to offer free tickets to all its participants in a bid to encourage youth attendance.

On 31 July 2021 Macclesfield FC played their first competitive match - a 1–0 home win against Burscough in the NWCFL Premier Division which was witnessed by 2,018 people.

Leon Arnasalam wrote his name into the history books that day, as he became Macclesfield FC's first-ever goal scorer.

The Club's first away match was on 3 August 2021. In what proved to be an encapsulating affair, four Tom Clare goals saw The Silkmen claim a share of the spoils in a 4 – 4 draw at Winsford United.

On 7 August 2021 Macclesfield FC played their first Emirates FA Cup match, beating Burscough 4–0 in the Extra Preliminary Round, but were then eliminated from the competition in the Preliminary Round losing 6 – 4 at Squires Gate.

On 11 September 2021, Macclesfield FC played in the Buildbase FA Vase for the first time - losing 3 – 2 at Northern Counties East League Premier Division side Winterton Rangers in the First Qualifying Round.

The Club was featured in a two-part BBC Sport documentary, entitled "Robbie Savage: Making Macclesfield" which was first broadcast on 13 November 2021 and has enjoyed over three million views to date.

In March 2022, Macclesfield FC became the first Club within the top nine tiers of English football to secure promotion.

In addition to this, many of the Club's other teams have already enjoyed a vast amount of success during their debut season - with the Women's First Team lifting the Cheshire Women’s & Youth Football League – Championship East title and the Under-16s side claiming a unique quadruple.