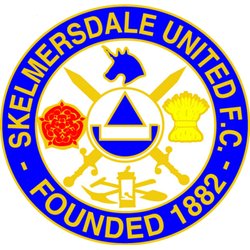 The club returned to the Town in December 2019 after spending two years in exile at Prescot Cables, having been evicted from their home of “Stormy Corner” by the landlords.

Having had a highly successful spell in recent seasons having won the Northern Premier League North in 2012-13, also claiming the Lancashire Cup in 2009, The Liverpool Senior Cup in 2015 under the guidance of mercurial manager Tommy Lawson.

Players from the club made it to the Football league, Craig Noone Sean McConville, George Donnelly, and Ben Tollitt. Whilst others moved further up the pyramid.

However success could not be maintained and United with the eviction at Stormy Corner have found themselves back in the North West Counties as Manager Paul McNally looks to re build the club to former glories.

They moved to White Moss Park, their spiritual home in 1957 and progression to the Lancashire Combination saw them clinch the Division Two title in their first season.

Steady progress was made in the Combination as United became a force to be reckoned with, Chairman Bill Gregson’s dream to make progress in the Amateur Cup and with the appointment of Manager Bernie Banks in 1966 saw United become one of the most respected non-league sides in the Country reaching their first Wembley final in 1967, drawing 0-0 against Enfield beneath the Twin Towers, United lost the replay at Maine Road 3-0, Bill Gregson was not unperturbed as two Semi-Finals in the following three years saw United come ever so close to a return to Wembley.

The Appointment of Roy Rees in 1970 saw United make that a reality as the United side conquered all before them, including Dagenham in the Final, comprehensively outplaying their opponents, a Ted Dicken hat trick gave United a 4-1 win.

One of the everlasting memories of the successful Amateur Cup days was the tremendous support for the club. The phenomenal increase in crowds will probably never be repeated again, with regular crowds between 1,000 and 1,500 for league games, rising to several thousand for cup games. Indeed the record gate for the club was 7,500 for a Quarter-Final game in March 1967 that resulted in a 1-0 victory over Slough Town.

It was not United’s only success in the late 1960s and early 1970s,as United’s roll of Honour included Two Cheshire League titles, 2 Lancashire Cup winners. 2 Cheshire League Shield winners, plus 3 appearances in the 1st Round of the FA Cup. There is no doubt that the 1967-1971 period was a golden era for Skelmersdale with many players progressing into the Football League. Steve Heighway, Mickey Burns, Norman Whitehead, Dave Moorcroft and Alan Mansley amongst others to have stepped up to league football.

Although the club joined the Northern Premier League in 1971 it was to be an unhappy time for the club, with financial problems that the club would have hanging round its neck for over two decades and performances on the pitch were less than impressive. The club had to wait till 2000 to claim their first piece of silverware, The North West Counties League Cup.

The club left their spiritual home of White Moss Park in 2002 and eventually moved to the newly named Westgate Interactive Stadium (Stormy Corner). United’s fortunes changed becoming a potent force in the North West Counties, eventually gaining promotion to the Northern Premier League in 2006 and enjoying the success that followed.

Despite the last two seasons being badly interrupted by the covid pandemic, Skelmersdale United made headline news as they battled through to the first round of the FA Cup in 2020-21, for the first time since 1971, the club were featured live on BT Sports, going down to Harrogate 4-1.

They followed the Cup success. with runners-up spot in the North West Counties League in 2021-22 and gained promotion to the Northern Premier League West with a 5-1 victory at Cinderford Town in the Inter-Step play offs.