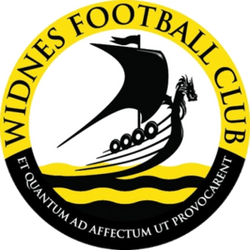 Widnes FC’s origins can be traced back to 2003 when the club was originally formed as a youth football club.

In 2012, the groundwork was laid for the club to make the set up into senior football as in March of that year, a consultation process began with Widnes Vikings RLFC to become part of the Vikings Sports brand, a partnership that would enhance the clubs community status.

A First Team was formed with the initial short-term goal of gaining admission into the North West Counties Football League under the guise of ‘Widnes Vikings FC.’

Steve Hill was appointed First Team manager in September 2012 and steered the Club to a 4th placed finish in its inaugural and so far, only season in the West Cheshire League Third Division. During this season, the Club also submitted its application to join the North West Counties Football League for the 2013/14 campaign.

Prior to the new season, Widnes’ application was successful, and the Club began life in the North West Counties Football League Third Division with a 3-1 home defeat to Cheadle Town before winning their first game in the NWCFL with an emphatic 5-1 away win over Northwich Flixton Villa.

Hill eventually guided his side to a 14th placed finish in their inaugural season in the First Division with 36 points from 36 games.

Off the pitch, the Club would be re-named as Widnes Football Club after ending their partnership with Widnes Vikings.

The 2014/15 season saw the Club make significant progress in cup competitions. Widnes reached the last 16 of the League Cup before falling to eventual League Champions Glossop North End and reached the quarter-final of the Liverpool Senior Cup, beating Prescot Cables before being knocked out in the last eight by eventual winners Skelmersdale United.

The following season saw the Club again reach the Quarter-Final of the Liverpool Senior Cup, coming up against an Everton XI managed by David Unsworth. The young Toffees excelled in the game and beat Widnes 8-0 despite an admirable performance from the home side.

After a thirteenth placed finish, Chairman David Day and Manager Steve Hill stepped down from their roles, allowing a new Board of Directors and management team to be appointed to bring some much-needed new stimulus to the club.

Danny Meadowcroft and Brian Pritchard were appointed as joint managers heading into the 2016/17 season but later left the Club by mutual consent following an indifferent start to the season in September. Danny Salt was appointed interim manager, leading the side to a win and a draw in his two games in charge.

The title and promotion was secured with a game to spare after a 5-1 win at AFC Blackpool, with Widnes winning 14 straight games to finish at the top of the pile. The Whites also performed admirably in cup competitions that season, reaching the last eight of both the League Cup and Liverpool Senior Cup, and the Semi-Final of the First Division Cup before losing out to eventual winners City of Liverpool.

During the season, Kevin Towey became the Club's new record goalscorer following a brace at Skelmersdale United in November – a record that still stands to this day at 72 goals.

The 2017/18 season started with Widnes’ first-ever FA Cup game which ended in a heavy 5-0 defeat at home to Handsworth Parramore at the Halton Stadium.

Ultimately, manager Dunn would depart in early October, resigning from his position as manager. Senior players Kevin Towey and Steve Akrigg were installed as player/joint-managers and would go on to enjoy a massively successful first foray into management.

Inconsistency would continue to plague the Whites in the following weeks, emphasised by a 3-3 draw at Padiham late in October that went viral after Widnes conceded twice in the last two minutes in a bizarre stoppage time period that was reported by various National Media outlets including The Guardian, the BBC and a feature on Soccer AM, while Champions League and World Cup winning goalkeeper Iker Casillas would tweet about the game on his Twitter account.

This would eventually have a positive effect on the side as Widnes never really looked back. A 3-0 home defeat to Charnock Richard in November would be the last time Widnes would taste defeat in the league until March as the Whites won 23 of their 25 remaining games to seal a second successive promotion to the Northern Premier League, beating out local rivals Runcorn Town on the final day.

In truth, Widnes’ form from November onwards was remarkable, only tasting defeat twice against Marine (Liverpool Senior Cup semi-final) and Barnoldswick Town – a run that included a 5-1 home win over Southport in the Liverpool Senior Cup, and league double over neighbours Runcorn Linnets.

Once again, the Club continued to make significant strides as one of Halton’s best junior football clubs. The 2018/19 season saw the junior section expand to 14 teams across eight age groups, including two girls’ teams at Under 12s and Under 14s.

The Club’s first season at Step 4 proved to be an inconsistent one, with co-bosses Akrigg and Towey ultimately guiding the side to a consolidatory twelfth placed finish. Widnes would again advance to the Liverpool Senior Cup Semi-Final, losing to Prescot Cables on penalties.

It was a significant season for a number of players, with Kev Pollard, Mike Burke and Chris and George Lomax reaching a century of Widnes appearances, while Accrington Stanley loanee Niall Watson would become the Whites’ youngest ever player and goalscorer in a 2-2 draw against Colwyn Bay in January aged 18 years and 211 days.

Widnes would once again consolidate their position in the NPL Division One North/West in 2019/20, sitting comfortably in mid-table when the COVID-19 pandemic curtailed the campaign early.

The Club did however reach the First Qualifying Round of the FA Cup for the first time following an extraordinary replay win at Mossley in the Preliminary Round, in which Conor Ready netted a 93rd minute winner after the nine-man hosts had come from behind to equalise in the 90th minute.

Despite the pandemic, the club have continued to grow with its burgeoning junior section now overseeing 26 teams including a new Under-17s side and the popular Wildcats initiative.

After the pandemic brought an early halt to the 2020/21 season, the Whites began the 2021/22 campaign with fresh optimism, but a poor start led to the departure of co-bosses Akrigg and Towey after a hugely successful three-and-a-half-year spell in charge.

Dave Dempsey was appointed new manager in September 2021 and would steer the club away from relegation danger to a comfortable mid-table position – a run which included a highly impressive set of results and to date, the club’s best ever run in the FA Trophy.

The Club’s junior section continued to expand, with the total number of teams now standing at over 30 ahead of the 2022/23 season.