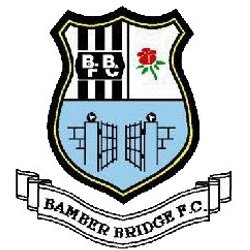 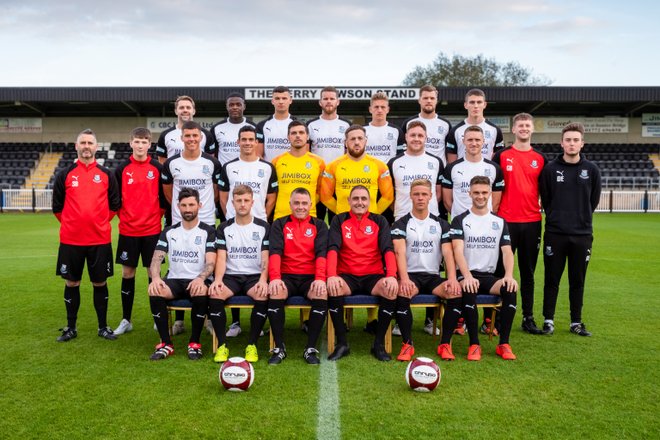 Bamber Bridge have become the latest NPL club to sign up to the Stay at Home - Be at the Game project.

Football in Bamber Bridge can be traced back as far as the late 1800’s. However, the present club was established in the summer of 1974 when the old Bamber Bridge club amalgamated with neighboring outfit Walton-Le-Dale. The new club played at the King George’s Playing Field and the early years were marked with a high degree of success on the local football scene.

The first sixteen seasons was spent in the Preston & District League Premier Division and many honours were gained. The first season, 1974-75, proved a somewhat modest one with a 12th place finish in the league. An improved showing the following term saw the fledgling club finish 5th in the table and they won their first piece of silverware, when lifting the Lytham Medal competition. The Premier Division championship was won for the first time in the 1980-81 season and was the first of four title successes. This honour was also achieved in 1985-86, 1986-87 and for the last time in 1989-90. The club also finished as Premier Division runners-up three times in 1978-79, 1982-83 and 1984-85.

During those sixteen seasons spent in the Preston & District League ‘Brig’ also enjoyed success in the League Cup competition, the Guildhall Cup. They emerged winners of the tournament on four occasions; firstly in 1978-79 and again in 1980-81, when they achieved the ‘league and cup double’ for the first time. They won the Guildhall Cup for the third time in 1984-85 and again in 1989-90, when winning the ‘league and cup double’ for the second time. The club were also Finalists in 1977-78, 1979-80 and 1987-88. Along the way, the club finished as finalists in the Premier Division Ward Shield in 1983-84.

Throughout this period, the club committee had dreamt and worked towards establishing a football ground of their own and in 1983 a piece of derelict land was purchased with the help of South Ribble and Sports Council’s. It took four years of dedicated work and considerable expense to change this overgrown land into a football pitch, which was named Irongate after the local area. It was indeed a proud moment to see the team play on the club’s own ground after having played on a park pitch for so long. The first game at Irongate was played in August 1987 and since then continual development and improvements have taken place at the ground to enable the club to enjoy a place within the National Leagues System.

Sustained success in the Preston & District League prompted the club to seek progression and at the beginning of the 1990-91 campaign the club joined the North West Counties League. In their first season, in what was in those days, the first rung of the National Leagues System, ’Brig’ finished in a creditable 4th spot in the Second Division. Twelve months later and the club won its first honour in the semi-professional game when taking the North West Counties League Second Division championship and with it promotion to the top flight. The 1992-93 campaign proved to be a storming success with a runners-up spot in the First Division which was to see the club promoted for the second season running with a place in the First Division of the Northern Premier League. That memorable season the club reached the Semi-Final of the FA Vase, only one step away from the famous Wembley Stadium. Then just to top things off, ‘Brig’ were finalists in the North West Counties League Floodlit Trophy.

During this period floodlights were installed at the Irongate ground and further ground improvements were made to facilitate promotion to the Northern Premier League. In their first season in the NPL, the club finished in a creditable 13th place in the First Division and were finalists in the First Division Cup. In the following term, 1994-95, the club won promotion for the fourth time in its history, after finishing runners-up in the First Division. Also that term, ‘Brig’ captured the Northern Premier League Challenge Cup when overcoming those famous cup fighters, Bishop Auckland, by 2-1 at Bolton Wanderers old ground, Burnden Park, before lifting the Lancashire FA Challenge Trophy, with a 2-1 victory over favourites Morecambe at Deepdale.

Against all the odds in 1995-96, their first season in the Premier Division, the club won the Northern Premier League title beating off late challenges from Hyde United and Boston United, the final outcome depending on the results on the last day of the season - a history making season for the club. ‘Brig’ reached the Lancashire FA Challenge Trophy Final for the second time on the trot, but this time finished as runners-up, losing 0-1 against Morecambe; the Final once more being played at Deepdale.

Bamber Bridge entertained the Czech Republic International team in a friendly game prior to the Czech’s opening game against Germany in the EURO Finals in 1996. The successful Czech side had used Irongate for some of their preparations for the tournament in which they eventually finished as finalists.

In 1999-00 the club enjoyed an excellent run in the FA Cup, reaching the Second Round Proper for the first time in their history before bowing out by a narrow 0-1 margin at Football League Second Division side Cambridge United, the result decided on a disputed penalty. The club made it to the Lancashire FA Challenge Trophy Final for the third time that season but once again finished as runners-up after going down heavily by 0-5 against Marine in the Final at Chorley’s Victory Park.

After enjoying seven years in the Premier Division, the 2001-02 season proved a disaster finishing bottom of the pile, the club experienced relegation for the first time in its history. Restructuring of the National League System at the start of the 2004-05 season saw the club regain Premier Division status after two years in the lower tier.

Time spent back in the higher grade though lasted only twelve months and the club once again experienced the bitter pill of relegation at the end of the 2004-05 season, after finishing second from the bottom of the table. The season however, was not a complete disaster and despite the loss of Premier Division status, the Northern Premier League, League President’s Cup was lifted with a 3-2 aggregate win over Witton Albion.

Further restructuring of the National League System in season 2007-08 saw the club placed in the First Division North of the Northern Premier League. ’Brig’ reached the Play-offs in the first season of the new regionalised set-up; losing out by 2-3 to FC United of Manchester in the Semi-Final at Gigg Lane, Bury. ‘Brig’ once again reached the Lancashire FA Challenge Trophy Final for the fourth time in 2010-11 but lost out by 0-1 against AFC Fylde in the Final at Bolton Wanderers Reebok Stadium.

Due to financial restrictions the season 2011-12 was one of consolidation in the First Division North and by Easter saw a change in manager, with Tony Greenwood leaving the club and Neil Crowe who was Tony's assistant stepping up to the manager’s job, Neil Reynolds was appointed as assistant manager. Neil had re-joined the club at the start of 2009-2010 season and joined the coaching staff the following season. The season proved to be a very hard one both on and off the field, but a 13th place reflected on all the hard work that the management and players had put in.

Season 2012-13 started off very slowly with win consistency very hard to come by, and the period after Christmas saw an improvement with new signings, and two great runs especially the last one which saw us lose only 3 games out of the last 17, to finish the season just outside the play offs in 9th place.

In 2013-14 after suffering the defeat at the hands of Ramsbottom United in extra-time of the Play-off Final, in what turned out to be the last game to be played at The Irongate Stadium we kindly obtained permission to rename the ground The Sir Tom Finney Stadium, it is a name that is world famous in football and we all feel very proud and humble that Sir Toms family agreed, we also made his son Brian a honoury president of the club.

After the worst possible start to season 2014-15, when we conceded 7 goals in the first match of the season, the only way from there was up. With one or two changes in the playing staff, things got much better with new signings and we then became a force at both home and away.
In the middle of October we made the signing of what was thought to be one of the best players to wear a B.B.F.C. Shirt in the vastly experienced ex Preston North End and Nottingham Forrest midfielder Paul McKenna, after a couple of games Paul settled in and results improved all the time, So much so that apart from a blip in form around Christmas we finished in third place, and after beating Northwich Victoria in the Semi-Final of the Play-offs we lost the Final for the second season in a row this time to Darlington 1883.

Season 2015-16 was an indifferent season as regards the league, but an FA Cup campaign that saw the ‘Brig’ reach the Fourth Qualifying Round brought in some well needed revenue. After one of the worst December’s on record for rain, ‘Brig’ did well to finish the season at The Sir Tom Finney Stadium due to a collapsed drain and that hard-earned revenue in the FA Cup was soon spent on repairing the pitch. There was some consolation when the Brig won the prestigious Fair Play Award for the three divisions, which came with a cheque for £1000,

2016-17 was a bit of a roller coaster season to say the least, from the first match at Scarborough, when the coach broke down to the Integro Final when we beat four Premier teams on the way to lifting the coveted Trophy. Our form in the league was one of those that we seemed unable to put a run of wins together to fulfil our expectations of pre-season. After a poor run of results in November and December we had a change of manager when Neil Crowe after over 10 years loyal service stepped down and his assistant Neil Reynolds took over, and as in most cases when a change of manager takes place our form picked up, only to be out of contention of the P-layoff’s by the middle of March.

Number one priority then was the league cup, which we won on Wednesday 19th April at Leek Town, Harrison Park, beating Grantham Town 2-1, with goals from Jamie Milligan and Regan Linney. Our run in the league cup where we beat four Premier League Clubs had proved that all the hard work that we put in not only in the latter part of the season but throughout the season put us in the right frame of mind to have a good season in the league in 2017-18.

That good season followed and promotion to the Premier League was won via the Play-off Final with a hard fought 1-0 win over Prescot Cables. In front of a crowd of 1,628 the only goal was scored in the second half by local boy Chris Marlow.

The 2018-19 season saw the departure of two managers, Joey Collins and Matt Lawlor were asked to see us through to the end of the season. This proved to be a very difficult task but our Premier League status was maintained on a glorious Easter Monday in Crosby.