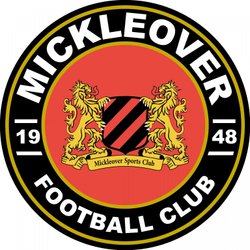 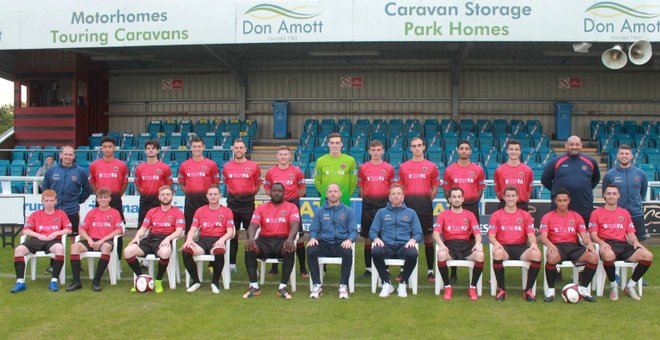 Mickleover moved clear at the top of the Northern Premier League as striker Declan Bacon scored two in a 4-1 win over Radcliffe.

Mickleover forward George Milner believes a strong work rate has been key to the club’s success so far this season as John McGrath’s side sit top of the Pitching In Northern Premier League Premier Division.

Mickleover Sports have announced that Declan Bacon and Jordan Walshaw have left the club.

Jake Bennett has returned to Mickleover for the 2020/21 season.

Mickleover Sports FC was founded in 1948 as Mickleover Old Boys playing in the Derby & District Senior League. For the next 44 years until their resignation in 1993, they were the longest serving club in the league.

In 1982 they, along with other members of the club, embarked on an ambitious campaign to develop their own football and cricket facilities on meadow land at the end of Station Road in Mickleover. During the next ten years dedicated club members led a serious fund raising drive, raising over £30,000 and work on the new ground finally began early in 1992, with the facilities formally being opened later that year.

Following development of the new facilities the ambitions of Mickleover Sports FC were increased and an application was made to join the Central Midlands Football League. This was successful and in 1993 Sports officially entered the non-league Pyramid for the first time. They drafted in an entire new management team led by Tony Shaw which resulted in both teams finishing 6th in their respective divisions.

Season 1994/95 saw Sports gain promotion to the CMFL Supreme Division and reach the Semi-Final of the League Cup on the way. In 1996/97 Mark Kelsey took up the managerial reins and Sports finished a creditable 6th in the Supreme Division.

Meanwhile, off the field Mickleover were learning to manage the new facilities. There was some limited on-going expenditure in the railing off of the pitch, laying of slabs to provide hard standing and erection of a small stand, but with the general ground maintenance as well, there was little money for anything else. However in order to progress (or even retain their CMFL status) the club needed to erect floodlights. A concerted fund raising effort was made and in 1997, at a capital cost of over £30,000, our ambition was finally realised.

The next development was aimed at providing dedicated facilities for our junior football teams. With the help of a National Lottery grant it involved taking one of the adjacent fields, to turn into a junior pitch. In addition to this, we built new changing rooms, referee’s room, toilets and showers, put in sewerage and re-built car park.

Back on the pitch, season 1997/98 saw Sports gain a third place finish in the CMFL Supreme Division and just 12 months later further improvement saw them crowned as the 1998/99 CMFL Champions. This season also saw Sports first venture into the Carlsberg FA Vase, where they embarked on an exhilarating cup run. After beating several teams from ‘higher’ leagues they were eliminated at the third stage in controversial circumstances. Winning 3-0 at eventual finalists Bedlington Terriers and with only 14 minutes remaining, the home side’s floodlights suspiciously failed. After an FA enquiry Sports lost the replay 2-0.

So, the club was assured promotion to the Northern Counties East League and season 1999/2000 saw Sports playing for the first time at level 5. After challenging hard they finished in fourth place in Division One. They also reached the semi-final of the Derbyshire Senior Cup and for the second year running they fell in the Third Round of the FA Vase.

Season 2000/01 saw Sports go one better by finishing third and reaching the Fourth Round of the Vase, but the following year was less successful, with a fifth place finish and early exits from all cup competitions.

Mark Kelsey was replaced by ex Belper Town manager Martin Rowe who led Sports to the NCEL Division One Championship in his first season in charge. For good measure Sports also won the Division 1 Cup (Wilkinson Sword Trophy) and reached the final of the Derbyshire Senior Cup for the first time in their history. Once again they reached the Third Round of the FA Vase, where they eventually lost by the odd goal in nine, after 240 minutes of football, to eventual Semi-Finalists Oadby Town.

So, Mickleover were once again in a position to move up the non-league pyramid to the NCEL Premier Division, we did however have to erect a 280 seat stand first.

After three seasons of ‘consolidation’ at their new level, season 2006/2007 was arguably Mickleover’s most successful season to date. Despite early exits from both the FA Cup and the FA Vase and the subsequent departure of manager Martin Rowe. New manager Dick Pratley led Sports to their highest ever position in non-league football, seventh place in the NCEL Premier Division, and Sports also won NCEL League Cup along the way beating Garforth Town.

The following year was disappointing as for the first time in recent history, Sports finished lower than the previous season. However it was to be no less than a minor ‘blip’ as the following season Sports eventually won the league by seven points.

The step up to Unibond (Northern Premier League) level was significant, and we were expecting a tough season. Unlike some other clubs, we will not jeopardise Sports future by paying players more than we can afford, but the development of several key U19 Academy players plus some astute signings by manager Dick Pratley, gave Sports confidence. Life in Unibond Division One South started well at Butt Hole Lane home of Shepshed Dynamo with 4-0 win. After seventeen games Sports record was mid-table W7 D4 L6. Then a record run of 16 consecutive wins catapulted Sports to the top of the table. Sports were never to look back and won the league by 7pts. They went on to win the Chairman’s cup by beating FC Halifax Town at The Shay. Then lost the Peter Swales Trophy on penalties to Guiseley.

2010/11 was another step up for Sports into the Northern Premier League now sponsored by Evo-Stik. The season did not start well with Sports gifting points to opposition. Their first win came away at local rivals Matlock Town with a tremendous display (also doing the double over them). But still Sports were gifting points especially the never to be forgotten 6-6 home draw against Nantwich Town. Sports were 6-3 up with six minutes to go. In the end Sports ended in fourteenth position and were safe with four games to go.

2011/12 saw Sports relegated for the first time. Despite scoring more goals than any other team in the bottom half of the table, inconsistent performances saw Sports drop down into Evo-Stik Division One South.

2012/13 Sports started with two wins, but this form dropped and were third from bottom in December. Dick Pratley and Colin Hoyle left, Charlie Palmer took over temporarily until permanent management team of Glenn Kirkwood and Craig Hopkins took over in January. Season ended with Sports second from bottom narrowly avoiding relegation having used 53 players.

The 2013/14 season had been a great improvement on what had gone before but was ultimately marred by Play-off final defeat to local rivals Belper. The management duo of Glenn Kirkwood and Craig Hopkins were determined to use the pain of disappointment in a positive way for the next campaign.

Sports started the 2014/15 season in positive mood, and but for good runs in both the FA Cup and FA Trophy would have topped the table almost from the start. Postponements to league games because of the cup competitions meant that they were always playing catch up, but even so they still managed to rise to pole position with games in hand. Their home record was excellent, and results on the road also impressive, so much so that they ended the season having scored in excess of 100 goals and the only disappointment was that the last day draw at home to Sheffield FC denied them the record of most points gained in an individual Evo-Stik Division One South season.

Sports started 2015/16 well getting to eighth. But having an unsettled side with a lot of movements in and out saw them in the relegation spots. Sports had a very disappointing season in the cups and went out at the first time of asking in all competitions. Back in the League, Sports picked up with eleven games to go when forced to have a settled side due to the close of the Transfer window. Sports survived with a game to go, and that last game at already relegated Stamford joint managers Kirkwood and Hopkins resigned. Sports were quick in approaching Captain and Academy Manager John McGrath to take over. Sports also went on to win the Evo-Stik NPL Academy League again.

2016/17 Sports finished the season with most points they have gained in the NPL Premier Division. Again early exits from the major FA Cup competitions was a disappointment. Sports blooded a lot of their Academy players with Lewis Belgrave becoming the first NPL Academy player to Captain any first team. Again Sports won the Academy league.

2017/18 Sports finished in their highest ever position – twelfth as John McGrath continued to give Youth their chance to shine with six teenage debuts. One of these – Morgan Williams developed throughout the season and eventually was snapped up by Coventry City for a fee of £12,000 plus add-ons. Sports competed well against all the top teams but were too inconsistent against lower placed teams and this, along with a poor disciplinary record, meant a Play-off position was out of reach.

The loss of top scorer Andy Dales to Scunthorpe United for a fee of £10,000 plus add-ons badly affected Sports 2018/19 season as their lack of goals meant a continual struggle throughout the season. They competed will against several of the top sides but only a good finish to the season and a last day win saw them survive the drop. An appearance in the Derbyshire Senior Cup Final at Pride Park was the highlight of the season and although they put in a good performance they lost out to Alfreton Town by 2-1.

The 2019/20 season was cancelled in March due to the COVID-19 pandemic. The Sports were thirteenth in the league with some considerable games in hand.