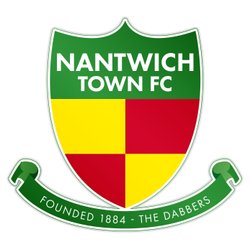 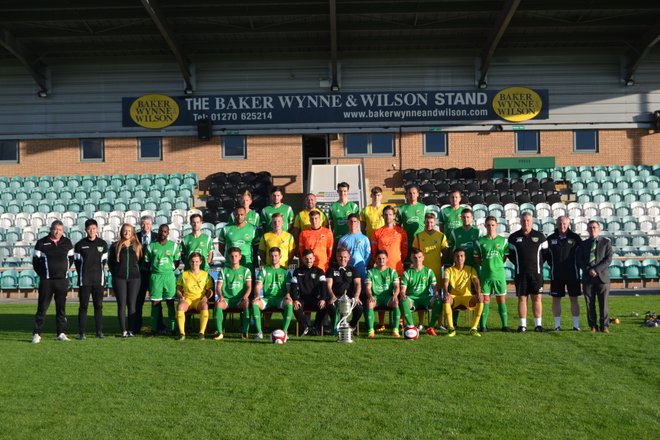 Nantwich Town Football Club were founded back in 1884. The club took up residence at the football pitch off London Road with the Leopard Inn as its headquarters and changing rooms. The club’s early years were spent playing friendly and cup matches but in 1891 the club joined the Shropshire & District League, finishing as runners-up in their first season.

After the First World War, the club became founder members of the Cheshire County League in which they were perennial strugglers. In 1921, a record home attendance of 5,121 watched the Dabbers play Winsford in the Cheshire Senior Cup at the club’s temporary home at the old cricket ground at Kingsley Fields. Ironically, this is the location of the new club’s new Weaver Stadium.

The club gave Freddie Worrall his first chance in senior football in April 1927. The youngster going to become a pre-war England international as well as playing in two FA Cup Final’s for Portsmouth.

Success for Nantwich though came in the Cheshire Senior Cup in 1933 when the Dabbers lifted the trophy. They beat ICI (Alkali) 1-0 in the Final. After the Second World War, the Dabbers joined the newly founded Mid-Cheshire League and in 1952, the club entered the inaugural FA Youth Cup competition. Drawn against Manchester United in the Second Round, the young Dabbers crashed 23-0 on a November evening at the Cliff training ground. United’s youth line up including names such as Duncan Edwards, David Pegg, Albert Scanlon and Ron Cope.

In the 1963/64 season the club completed a treble, winning the Mid-Cheshire League, League Cup and Cheshire Amateur Cup. This was under manager Alan Ball (senior) and Nantwich re-joined the Cheshire League for the 1968/69 campaign. In 1976 the Dabbers beat NPL champions Runcorn 5-4 in the Cheshire Senior Cup final at Crewe in front of 2,237 supporters. Five years later in May 1981, a crowd of 1,078 saw Nantwich clinch the Cheshire League title by beating eventual runners up Hyde United in the penultimate game of the season 2-1.

The previous season had seen Nantwich blood a lanky 19-year-old who had been signed from Whitchurch Alport. His name was Jimmy Quinn and he went on to play football at the highest level with Blackburn Rovers and West Ham United. He went on to gain 48 caps for Northern Ireland, becoming the fourth highest scorer in his country’s international history.

A new era in the North West Counties Football League

1982 saw Nantwich become founder members of the North West Counties Football League. Unfortunately, Nantwich had the unenviable honour of finishing bottom in the league’s first season and were relegated to Division Two. They remained there (except for one season in Division Three) until 1989 when they were promoted to Division One. Ex-Stoke City midfielder Nigel Gleghorn was appointed manager in November 2001 and the club also attained the prestigious FA Charter Standard ​Community Club award. Gleghorn left the club in the 2004 close season and former Crewe, Burnley and Barnsley defender Steve Davis was appointed as head coach.

Success in the FA Vase

Davis led Nantwich to FA Vase glory in 2006 when the Dabbers beat Hillingdon Borough 3-1 in the Final at Birmingham City’s St Andrews Stadium. Andy Kinsey hit two goals in the Final – and hit the headlines when he dislocated his shoulder celebrating the second! John Scarlett, the club’s post-war leading scorer with 161 goals, made a cameo appearance as a substitute in the same game. The following season (2006/07) saw the club finished third in the North West Counties League andwere promoted to the Northern Premier League First Division South as a result. That season was also the last at the clubs 123-year old Jackson Avenue home. Promotion was a fitting send off to the historic stadium and a crowd of 1,071 saw the club win 5-2 against Squires Gate in the last ever game at the stadium.

The club moved in the summer of 2007 into its new home, the Weaver Stadium, ahead of the 2007/08 season. Progress continued on the pitch that season, with the club winning their first Cheshire Senior Cup in 32 years. In the final, the Dabbers played Conference Premier side Altrincham and won 4-3 on penalties. The season got even better as the Dabbers won back-to-back promotions, finishing third in the league and again entering the Play-offs. They beat Grantham 2-1 in the Semi-Finals and then beat Sheffield FC in the Final, winning 4-1 on penalties after the game finished 2-2.

The 2008/09 season was another successful year as the Dabbers finished third in the NPL Premier Division, their third successive third placed finish. However, they were beaten in the Play-offs, losing 2-1 to Ilkeston Town in the final and narrowly missing out on three successive promotions. They also reached the Cheshire Senior Cup Final again, but Altrincham got their revenge. They beat the Dabbers 3-0 and shortly afterwards, Steve Davis left the club and was appointed as assistant manager at Crewe Alexandra.

Davis’ assistant Peter Hall, a former Nantwich and Macclesfield striker, stepped up to take over as head coach for the 2009/10 season. But after briefly topping the table, he parted company with the club in March 2010 after the Dabbers slipped to 15th in the league. Senior players Kevin Street and Darren Tinson took over the reins, lifting the club to 10th place and they were confirmed as joint managers during the close season. 2009/10 was a particularly special season for the Dabbers as it was the 125th Anniversary of their founding. The club even released a special badge to commemorate the occasion.

The 2011/12 season saw the club embark on its most successful run in the FA Cup, reaching the First Round Proper for the first time in the club’s history. Victories over Ramsbottom United, Northwich Victoria, Kendal Town and Nuneaton Town gave Nantwich an enticing tie at MK Dons. Although the Dabbers went down 6-0 on the day, their brave performance earned many plaudits. The club also won their second Cheshire Senior Cup in four years, beating Stalybridge Celtic to pick up their fourth honour in the competition.

When the club parted company with Quinn in March 2013, Darren Moss had a spell as caretaker manager as the Dabbers finished the season in 14th place in the ​2012/13 season. Danny Johnson was appointed manager ahead of the 2013/14 campaign and the former Ashton United boss quickly named Earl Davis as player/assistant manager. They finished 19th that year.

For the 2014/15 campaign, former Stalybridge Celtic striker Phil Eastwood stepped up from his role as coach to replace Earl Davis as assistant manager. But following a poor run of results and with the club fighting relegation, Danny Johnson was relieved of his duties in early February 2015. Former player Phil Parkinson was appointed the new manager on 4th February 2015. Parkinson had become a club hero during his time as a player. He was part of the side Nantwich Town to FA Vase victory in 2006 and had been an integral player of the team as they won back-to-back promotions only a few years earlier.

Parkinson appointed Neil Sorvel as assistant manager, Danny Griggs as first team coach and Chris Parkes as goalkeeping coach. The management team turned things around in the second half of 2014/15 season. They gained enough points to remain in the NPL Premier Division relatively comfortably with a few games remaining.

Parkinson and his management team were able to develop and build upon the strong end to the ‘14/15 season with an excellent 2015/16 season. They started the season in terrific form, scoring an incredible 41 goals in their first 12 games. They also picked up 24 from a possible 36 points from the first two months of the season. They carried their good league form over into the cup competitions, progressing to the FA Trophy First Round with wins over Salford, Kings Lynn and Stockport.

The Dabbers league form took a slight dip in January and February, but their FA Trophy run kept going. They progressed past Ashton, Matlock and Stourbridge to reach the Quarter-Finals of the competition for the first time in their history. In front of a crowd of 892 at the Weaver Stadium, the Dabbers beat Conference Premier side Dover 2-1 with a late winner from Liam Shotton to progress to the Semi-Finals. This meant they were sitting just two games away from a trip to Wembley.

In the Semi-Final, they faced FC Halifax Town over two-legs and gave it their all, but came up short, losing 6-4 on aggregate. The first leg at home attracted a bumper crowd of 2,078, a record for the club at the Weaver Stadium. It was a fantastic effort and run from Parky’s side and one they can feel immensely proud of. The team finished the league season strongly, losing just three of their last 14 games, but were unable to make up the ground on the Play-offs, finishing a more than respectable eighth with 75 points. They also scored an incredible 94 goals, the second highest total in the league behind only league champion’s 1883 Darlington.

The club enjoyed a fantastic 2016/17 season. In the cup competitions, they reached the Fourth Qualifying Round of the FA Cup for just the third time in their history. They also made it to the First Round of the FA Trophy but lost to Lincoln City. Meanwhile in the Cheshire Senior Cup, they made it all the way to the Final and finished as runners-up to Crewe Alexandra, losing 3-2 at Gresty Road.

In the league, they had an excellent run which led to them finishing 5th on 81 points, their highest finish in 8 years. They made the Play-offs, but went on to lose 2-0 to Spennymoor Town in the Final. They nevertheless had an outstanding campaign and looked to build upon that going into the 2017/18 season, though there was hurdles to overcome before they reached the new campaign.​

The summer of 2017 saw manager Phil Parkinson depart the club to join Altrincham, as well as a number of the key core to the squad moving on to pastures new. The board appointed Dave Cooke ahead of the 2017/18 campaign, who was quick to bring in plenty of additions to replenish the first-team.

While the Dabbers’ league form was inconsistent throughout the season, Cooke brought plenty of success in cup competition, guiding the club to the First Round Proper of the FA Cup for only the second time in their history, where they fell to Stevenage in a 5-0 defeat at the Lamex Stadium, a result that observers believed was very harsh on the men in green. Additionally, the Dabbers won the Cheshire Senior Cup for the first time since 2012 with a 3-0 defeat of Stockport Town.

The 2018/19 season saw Nantwich present their ambitions from the get-go, as they put together a strong run of form in the first half of the campaign, topping the table over the Christmas period. However, there were several clubs with games in hand on Dave Cooke’s side, and the Dabbers couldn’t hold onto their top spot.

The club eventually finished fourth, their highest finish since 2007/08. However, they fell in the play-off Semi-Final to Warrington Town at Cantilever Park.

Despite the league season ending in disappointment, the Dabbers did get their hands on some silverware, as they claimed their second consecutive Cheshire Senior Cup with a 5-2 victory over Cammell Laird. The run consisted of impressive victories against Crewe Alex at Gresty Road and wins at home against Chester FC and National League North champions Stockport County.