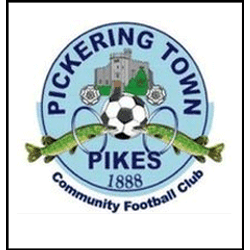 Pickering Town have announced the signing of Jordan Deacey.

Pickering Town have announced the signing of goalkeeper Charlie Andrew.

Pickering Town have announced the signing of Jack Johnson ahead of the 2020/21 season.

Pickering Town have announced the signing of Dylan Muggeson-Forbes ahead of the 2020/21 season.

Pickering Town have announced the signing of Keelan Simpson ahead of the 2020/21 season.

Pickering Town Football Club were first established in 1888, for many years the club competed in the local football leagues. One of the local leagues they competed in was the York Football League which they joined Division Two, in 1953/54. They were promoted to the league's top division after only one season.

The club dropped in form for the rest of the decade in comparison (although they did always finish in the top eight). During the 1959/60 season, they finished as league runners-up to Dringhouses.

They dropped in form a couple of seasons later, getting relegated in two successive seasons. For the rest of the decade Pickering lingered around the mid-parts of the Yorkshire League Division Three. In 1982 they became founding members of the Northern Counties East Football League and were in the NCEL Premier Division from 1992. It was around this time that the club first entered the FA Challenge Cup, they knocked out Penrith before losing to North Yorkshire rivals, Northallerton Town in the next round.

A few seasons later in 1996/97, they knocked out Pontefract Collieries 2–1 in the competition, but lost to Bishop Auckland in the next round. In terms of the draw, the club has had very bad luck in the competition, as every time they reached the First Qualifying Round, they were forced to play away from home. In 1999 Pickering were relegated to the NCEL First Division. This was to last only two seasons and promotion back to the Premier Division came in 2001.

Jimmy Reid transformation
The club underwent a great transformation with manager Jimmy Reid and his assistant Steve Brown in charge. Reid was a former player with St Johnstone and York City and Brown a former "Pikes" player and coach at the Leeds United Academy. At the end of 2001/02 season Jimmy Reid left the club and Steve Brown took control.

At the start of the 2002/03 season five first team regulars were lost for a variety of reasons which left the club struggling for much of the season. The hard work and dedication of Brown, his management team and the players was rewarded towards the end of the season as it all started to come together and with only four defeats in the last 15 league games the club finished the season in thirteenth position.

2003/04 season was an exciting one for the club as they were in the top half of the league table all season and for much of it, with games in hand, looked possible championship contenders. However, with a glut of fixtures, and possibly with the knowledge that promotion to the re-structured Northern Premier League was not an option due to ground grading, at the season’s end the club were not able to capitalise and finished in a creditable fifth position.

Early into the season 2004/05 owing to ever increasing business commitments Steve Brown stepped down as Manager to be replaced by ex-Ipswich Town and Newcastle Unitedstriker Alex Mathie, veteran of over 200 league games and 20 years as a professional.

After much ground improvement work in recent years, including the erection of floodlights, a new 120 seater stand, covered standing accommodation and more recently an additional 100-seater stand behind the "scoreboard end" goal, the club now possess one of the best grounds in the league.
Recent events

In the 2005/06 season the club reached the Quarter-Finals of the FA Vase the furthest in the club's history. The team eventually lost out to Nantwich Town.

After an encouraging start in the 2006/07 season, results took a turn for the worse over the winter period, and a run of one win in eleven games led to the resignation of Mathie as manager on 06 January 2007. Within a week, the board announced they had appointed ex-Pickering player and Mathie's assistant Mark Wood as the new manager.

The 2007/08 season saw the club finish in third in the NCEL Premier Division, their highest league position in over a decade. Off the pitch the club saw significant change and Pickering applied for promotion to the Northern Premier League. The club erected a removable fence for the cricket pitch side and improved the existing exterior toilet facilities. Ground development has continued with the club resurfacing and floodlighting the car parking facilities, adding new goals, corner flags and dugouts and improving the drainage of the pitch.

Mark Wood stepped down as manager early in the 2010/11 season and he was replaced by Scarborough FC legend Mitch Cook. Cook oversaw a change in philosophy mainly focussed on youth and passing football. This approach had mixed success, but the club eventually finished in a very respectable seventh place. Cook resigned just before the end of the season to take up the vacant managerial role at rivals Bridlington Town taking with him much of the playing squad.

On 30 April 2013, the club won the North Riding Senior Cup for the first time in their history following a 3–0 win over Marske United. The goals were scored by Liam Shepherd, Liam Salt and Joe Danby in the second half. The game was played at the headquarters of the North Riding County FA in Stokesley in front of 439 spectators.

Paul Marshall era
In the summer of 2015, Paul Marshall left the manager's job at Tadcaster Albion and was swiftly appointed as manager of Pickering Town. Denny Ingram joined him as a player and assistant manager. Pickering finished sixth in the first season under Marshall and second in 2017, behind only champions Cleethorpes Town. They reached the final of the North Riding Senior Cup in 2017, losing 3–1 to Whitby Town in the final at Middlesbrough's Riverside Stadium.

The 2017/18 season saw Pikes again finish runners-up. but this time promotion was secured and as a result entry to Step 4 football for the first time in our history. 96 points and 127 goals along the way, but it was a nervy last five days as 5 points were needed to automatically go up from the last three games, a 0-0 draw at Staveley on the Monday a 1-1 draw at Barton on the Thursday meant we had to win on the last day at Hall Road, Joe Dandy put Pikes ahead in the second half but the home side equalised with fifteen mins to go, an agonising last ten minutes were facing us until Casey Stewart making only his second start headed us to victory with nine mins left.

Marshall's reign at Pickering lasted until March 2019, when the club needed a change in fortune after the season hadn’t gone to plan. Denny Ingram stepped into the role for the last thirteen games and secured enough point to fend off relegation.

Season 2019/20
Denny’s second season started badly and by the turn of the year it was clear that relegation was looming. Having spent several seasons as Scarborough Assistant Manager Steve Roberts was looking for a new challenge and the Board were convinced to offer him that chance. Despite some significant progress we were still struggling and then the season was ended by COVID.

The Board showed faith in Steve and he is now in the process of building his side to achieve some stability in season ‘20/21.