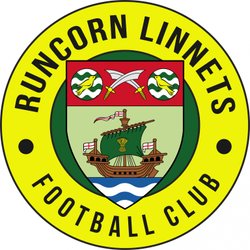 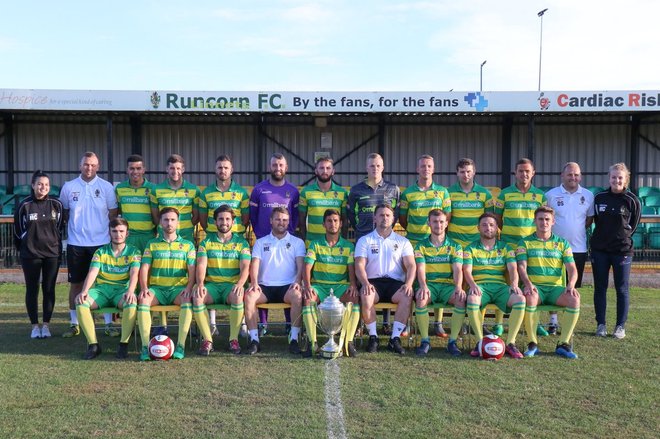 Runcorn Linnets have announced the re-signings of Peter Wylie and James Short for the 2021/22 Pitching In Northern Premier League N/West Division season.

Runcorn Linnets have announced the signing of Oladapo Olarewaj.

Runcorn Linnets have confirmed the signing of Carl Spellman.

Tom Ruffer has followed in the footsteps of his father, Carl, after signing a deal with Runcorn Linnets.

Runcorn Linnets have announced the re-signing of Jack Hinnigan ahead of the 2020/21 season.

Runcorn Linnets launch the 2020/21 season, following the curtailment of the previous campaign due to the coronavirus pandemic, with a change of manager and a new pitch.

The extended summer break saw the installation of a world-class playing surface as Linnets were chosen to take part in the second phase of Sport England's hybrid carpet pilot programme.

The project, also in conjunction with the Football Foundation, Premier League, The Football Association and Cheshire FA, involved the laying of the durable international-standard pitch, comprising 95% natural grass, growing through and intertwined with the grass fibre carpet.

Its unveiling is the culmination of two years of hard work. The pitch will benefit all sections of the club – being used for matches by the first team, Under 21s and Academy teams plus the Linnets Ladies (newly-promoted to the North West League) along with the Academy and junior players, managers and coaches for training. It will also be available for hire to community clubs and organisations.

The other major happening in the close season involved the departures of Runcorn Linnets' long-serving management team of boss Michael Ellison and assistant Matt Cross plus the retirement through injury of influential player and club captain, Kyle Hamid. Only Matt Atherton (313) has made more appearances than Kyle's 261* with Ellison, Mark Houghton and Rob Whyte the only other double century makers.

The Trust Board opted not to re-engage the management duo for 2020/21 after differences over future strategy proved to be irreconcilable. However, ‘Ello’ and ‘Crossy’, who had been in charge since summer 2016 after both playing for the club, are assured of legendary status at Linnets on account of their on-field service and managerial achievement in bringing the club its first title success.

Ellison has been succeeded by 26-year-old Calum McIntyre, who becomes one of the youngest managers in the Football Pyramid. An FA Level II and UEFA B licensed coach, Calum joins from fellow fan-owned club Chester FC, where he had been first-team coach. The agreement sees Calum continuing to serve Chester in his other roles as Academy head coach and youth team manager. He quickly named former Norwich City and Aberdeen defender Colin Woodthorpe as his Runcorn assistant, Colin having successfully held the same managerial positions at both Colwyn Bay and AFC Fylde.

The pair lead Linnets into their third Northern Premier League (NPL) season, although, of course, only one of the previous two was completed – Runcorn had been lying tenth in the North/West Division when matches were suspended, and remaining fixtures later cancelled amid the COVID-19 crisis. The season at Step 4 was ultimately declared null and void by The FA.

The club had enjoyed a very creditable introduction to NPL life in 2018/19.

Remaining competitive throughout their first season, after promotion to the then Division One West, the Linnets eventually missed out on a Play-off spot on goal-difference.

Comfort with their new status was further underlined by the Linnets progressing to the Semi-Finals of the Integro League Cup, defeating two Premier Division opponents along the way.

Linnets had put the heartbreak of multiple promotion disappointments well and truly behind them by securing a place in the NPL as The Hallmark Security League Premier Division champions of 2017/18.

This meant further cause for celebration in the 100th anniversary year of the founding of the original Linnets, Runcorn AFC. Manager Ellison had steered the team into the fourth tier of the National League System in only his second season in management.

After three runners-up finishes in the previous four seasons, promotion was finally clinched on 28 April 2018, 12 years to the day since the club's foundation.

The title was duly secured on 03 May 2018 with a 5-0 home victory over Blackpool outfit, Squires Gate.

The long-awaited league crown had been captured with two matches to spare and 100 points – a club record 122 league goals being scored over the 44 games with 36 conceded.

A crowd of 890 – still the record attendance for a Linnets home league match – saw the title trophy being lifted by jubilant club captain, Kyle Hamid on the final day of the season. The attendance of 962 for the Buildbase FA Trophy visit of FC United of Manchester on 23 November 2019 is now the highest for a competitive Linnets fixture at the MLS, which turned 10 years old in July 2020.

The Linnets have come a long way since being founded in 2006 by supporters of former national non-league champions, Runcorn AFC after a traumatic end for the old club.

The initial aims had been to bring the successor Linnets back to Runcorn and re-establish the club as one of which the community could be proud. Both these ambitions were achieved with the club still in its infancy.

The Millbank Linnets Stadium, carrying the name of loyal, long-time main club sponsors Millbank Holdings and in the Murdishaw area of Runcorn, opened in 2010 with the project having been supported by Halton Borough Council, the FA and Football Foundation as well as the club and its fans.

The winter of 2017 saw the completion of a replacement £1.4 million clubhouse as part of wider redevelopment of surrounding land with retail and leisure facilities.

At the same time, surrounding pitches were fenced in for use by the Linnets' numerous junior teams with the club also signing a new long-term lease for the extended site with Halton Council.
Runcorn Linnets Football Club was born after Runcorn AFC had intimated they would not be in a position to field a team beyond the end of 2005/06 season.

Since leaving town in 2001, the now defunct club had suffered a troubled and nomadic existence.

Fans met at their spiritual home of Canal Street – in the then Quayside Bar and Function Rooms, next to the Linnets Park housing estate on which Runcorn AFC's ground had once stood.

An existing Supporters Trust was remodelled to run Runcorn Linnets, whose identity was derived from Runcorn AFC's nickname.

The new club spent its first four years playing home games as tenants of Witton Albion FC at Wincham Park, Northwich - gaining promotion at the first attempt to the top division of the North West Counties League (NWCL) under the management of Steve Carragher, who had been the predecessor club's last team boss.

Victory against Formby in the NWCL Challenge Cup final in 2012/13 brought a first winners' trophy for the first team. Former Runcorn AFC player, Joey Dunn was the then manager.

Paul McNally is another "old boy" of the original club to have managed the new with Steve Wilkes being the only manager not to have had any previous Linnets connections - prior to Calum McIntyre taking charge. Wilkes had in 2009 led the Linnets to their first ever final, only to be beaten to the League Cup by New Mills at Tameside Stadium, which would be the scene for the club's triumph in the same competition four years later.

The abandoned 2019/20 season saw Linnets make their debut in the NPL Academy as they looked to build on firm foundations. It is hoped the U21s formation for 2020/21 will provide another important pathway to the first team.

*includes matches played in the null and void 2019/20 season.