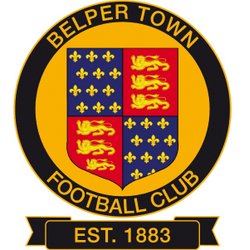 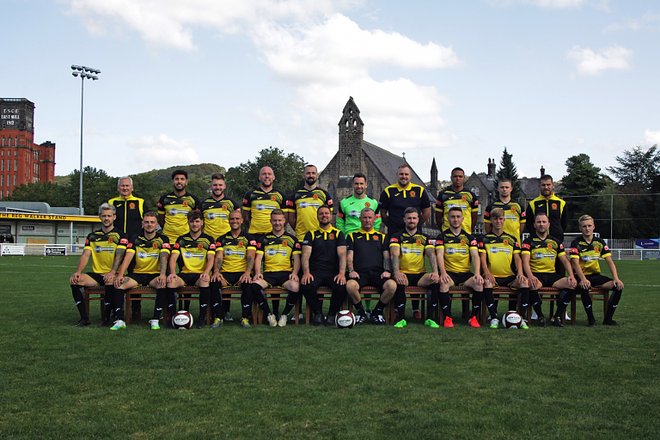 After six long years of planning, Belper Town Football Club have announced the opening of their new 4G training arena at the Raygar Stadium.

Belper Town have announced the signing of Luke Hinsley from Worksop Town.

Belper Town have announced that Danny Gordon has left the club.

Grant Black has signed a new deal to remain manager at Belper Town until the end of the 2021/22 season.

Belper Town's unusual nickname, 'The Nailers', came about because the craft of nail making began in Belper in the Middle Ages when it was the site of a hunting lodge for John of Gaunt. The huntsmen needed nails for the shoes of their horses and the trade in nails eventually grew.

Nail making was a domestic industry with the Nailers working in family groups but, in 1861, the introduction of machinery to manufacture nails was the begin¬ning of the end for the local trade which died out altogether at the beginning of the century to be replaced by modern industry and commerce in the town.

Like the nail making industry, Belper Town FC has faded away in the past. Origi¬nally formed in 1883, the Nailers went out of existence three times through lack of finance.

The main highlight in those early years was an FA Cup First Round tie against Sheffield Wednesday on 15 October 1887 in which the Nailers were narrowly defeated 2-3 by the Yorkshire giants.

The Club reformed, possibly for the fourth time, in 1951 and took up residence at the current ground at Christchurch Meadow. In those early days, there were very few amenities on the ground and for a number of seasons, players used to get changed at the “Talbot Hotel”, a few hundred yards from the ground.

Lying in a picturesque setting, the recently named Raygar Stadium is well appointed with excellent facilities and a first class playing surface.

The club has made many improvements in recent seasons, including new dressing rooms and conference facilities built in 1999. In 2003, the club opened a new 500-seater stand to bring the stadium up to NPL Premier Division standard and beyond.

This supplemented the provision of an earlier covered stand that accommodates 300 spectators, improved spectator terracing and perimeter barriers. The current ground capacity is 2,000.

New floodlights were installed in 2014 at a cost of £76,000, which more than doubled the intensity of the previous system. The new floodlights are of National League standard.

Season 1958/59 was a turning point as the Nailers outshone wealthy Heanor Town and Ilkeston Town, their strongly backed neighbours, with 2,000+ gates to win the Central Alliance League Championship and the Derbyshire Senior Cup.

Three years later, they were invited to join the revamped Midland Counties League (MCL) although three times the Club finished bottom of the League, the last time in 1978/79, when only the charitable overtures of member clubs at the League AGM saved Belper from comparative obscurity once again.

Under the astute managership of lvan Hollett and John Harrison, the Nailers responded to the challenge in magnificent style by winning the MCL Championship in the very next season and, just for good measure, the Derby¬shire Senior Cup as well.

The Midland Counties League merged with the Yorkshire League in 1982 to form the Northern Counties East League (NCEL) and the Nailers won the League Championship in 1984/85 under the guidance of the late Harry Bethell.

The Championship success that season coincided with the arrival of former Derby County and England striker, Kevin Hector.

However, lack of finance at that time held the Club back from taking up a place in the newly formed First Division of the Northern Premier League (NPL).

The club has enjoyed success in the FA Vase, reaching the Fifth Round twice and also a semi-final appearance in which they lost 2-3 on aggregate to Oxford City, having won the first leg 1-0 at home, in front of nearly 2,000 spectators.

Highlights that season included a 5-1 win at Falmouth Town (the longest distance ever travelled for a competitive match) and a 1-0 success at Metropolitan Police in the quarter-final.

Having achieved the runners-up position in the NCEL in 1996/97 under the excellent stewardship of Martin Rowe, the Club took its place in the NPL 12 years after the first opportunity had been spurned.

Initially the club did well in the league but then struggled in subsequent seasons. Ernie Moss and his assistant, Sean O’Neil, kept the club safely away from the relegation positions during their time in charge at Christchurch Meadow but the club did not really challenge for honours.

Ernie and Sean resigned their positions midway through the 2006/07 season, to be replaced by goalkeeper, Andy Carney and club captain, Danny Hudson, initially on a caretaker basis. The joint managers did more than enough though to secure the managerial reins on a permanent basis and enjoyed consistently successful results in the League during their time in charge.

The new managerial team achieved their first piece of silverware in 2008 by winning the Derbyshire Senior Cup with a 4-3 aggregate victory over neighbours, Alfreton Town.

In 2008/09, the Nailers finished the league campaign in second place, having secured 81 points and equalling their record points score of 1984/85 when the club won the NCEL Championship. A heartbreaking home defeat in the Play-off final against Stocksbridge Park Steels was a bitter pill to swallow.

But the Nailers went close again the following season before just missing out on a Play-off position by finishing in sixth position. They did capture the League President’s Cup with a 3-1 victory over Stamford but missed out on a ‘cup double’, losing 0-2 against neighbours Matlock Town in the Derbyshire Senior Cup Final at Pride Park Stadium.

But the early season expectations failed to materialise and Taylor resigned his position after just nine games in charge, leaving the Nailers with only two wins to their credit. The Belper board acted quickly to appoint former Retford United manager, Peter Duffield into the hot seat, supported by Mick Godber as his assistant.

Results in their first season at Christchurch Meadow were quite remarkable with the team winning 44 points out of possible 48 in the final run-in to the campaign, but the club just missed out on the Play-offs by a single goal difference.

Despite a poor start to the 2012/13 season and lying in bottom place in mid-October, the Nailers embarked on a 25-match unbeaten league sequence that saw them gain an automatic Play-off position.

But heartbreak was to repeat itself at the end of the season when a home defeat against eventual promotion club Stamford in the first Play-off match, consigned the Nailers to another season in the First Division.

A 2-0 semi-final Play-off win at Leek Town set up a home tie against Derbyshire rivals Mickleover Sports and a 1-0 success in that final game earned the Nailers the promotion they had been craving after 17 seasons in the League’s lower tier.

However the 2014/15 season proved to be a major disappointment as Peter Duffield and Mick Godber resigned after a winless opening 10 games to be replaced by the club’s leading goal scorer Jon Froggatt, assisted by Mark Ward.

Arriving in the hot seat was former Grantham Town manager Jimmy Albans and he was joined by his former assistant, Wayne Hallcro, later in the season but despite an encouraging spell of late season form and results, the damage had been done and the club lost its place in the NPL Premier Division at the end of the campaign.

Season 2015/16 saw a continued decline in playing fortunes and Albans and Hallcro were relieved of their duties in September 2015 after a dismal start to the season, to be replaced by former Derby County and Notts County defender Charlie Palmer and his assistant, Lee Barrow.

New into the Nailers management roles came Grant Black, who was assisted by former fans’ favourite Mick Norbury. Prior to taking the reins at the Belper Town, Grant was manager at Ossett Town and led the club away from the relegation zone and into the 2016/17 North Division Play-off final, all in the space of 16 months.

Building a squad from scratch, Grant and Norbury masterminded a superb turnaround in form, with the team finishing a creditable ninth place at the end of the 2018/19 season.

The Nailers continued to build on their upturn in fortunes and when the 2019/20 season was brought to a premature curtailment in March 2020 The Nailers were in a healthy position in the Play-off places and were looking forward to a Derbyshire Senior Cup Final at Derby County’s Pride Park Stadium. Promotion ambitions and cup success were cruelly denied when the season was declared null and void.

But the undoubted highlight of the season was a great Emirates FA Cup run that ended in the Fourth Qualifying Round with a 2-1 defeat at Notts County in front of 5,729 fans, including 1,800 from Belper. It was certainly a day to remember for Nailers supporters.