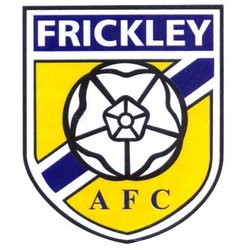 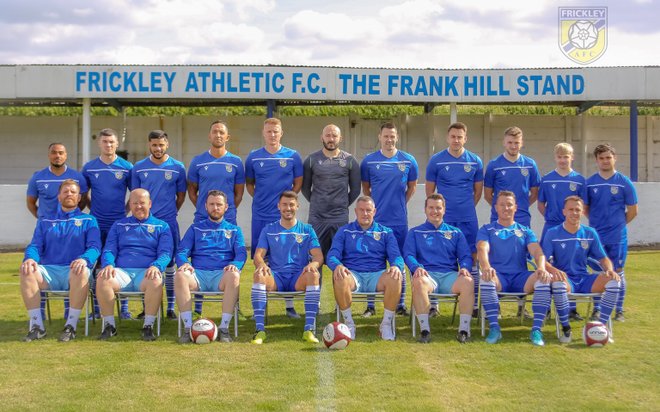 Frickley Athletic FC is based in the former coal mining village of South Elmsall, in the Wakefield district of West Yorkshire. Recent research has shown that the first South Elmsall football team was a founder member of the local Hemsworth and District League, in 1905, where they played for three seasons. In 1908 this team was superseded by the newly formed Frickley Colliery Athletic Club and joined the South Yorkshire League which comprised of works, church, and village teams. As the village of South Elmsall and the Colliery expanded rapidly, the mineworkers, with the support of the colliery owners set up a weekly levy on their wages to help to finance the football and cricket teams. In 1910, the football club moved up to join the Sheffield Association League. The club also became an associate member of the FA and first played in the FA (English) Cup in 1910.

The club remained in the Sheffield Association League (except for the war years) until 1922, finishing runners-up in 1911/12, and winners in 1920/21, the only time that the club has won a league title.

In 1922/23 Frickley joined the Yorkshire League and after finishing runners-up in 1923/24, the club were elected into the Midland League, which at that time included Mansfield Town, York City and Scunthorpe United, who were later to join the Football League. This was a big step up for Frickley and the club finished third bottom and second bottom in its first two seasons, improving to twelfth place in 1926/27. Steadily more Football League reserve teams rejoined the Midland league, in some years making up more than half the teams in the league. Although the Club had to apply for re-election several times pre-war (and didn’t play in any league in 1933/34) it was kept going by the continuous financial support of the local mineworkers and the transfer of players to league clubs.

1936/37 was Frickley’s worst ever league season when the club finished bottom with only 8 points, but amazingly reached the FA Cup First Round Proper for the first time – winning more games in the Cup run than in the league season.

Post-war Frickley remained in the Midland League gaining its best finish, seventh in 1945/46, but left the league on its break-up at the end of 1959/60.

From 1960/61 to 1969/70, Frickley Colliery played in the Cheshire County League, finishing third in their first season, but mostly mid table thereafter. However, financial considerations led the club to join the Midland Counties League for 1970/71. They finished runners up in 1972/73, and, after several unsuccessful applications, were elected into the Northern Premier League for the 1976/77 season as Frickley Athletic.

After finishing third in the League in 1979/80 and receiving a satisfactory ground grading, the club was promoted into the Alliance Premier League, now the National League. Here they remained for seven years, the most successful in the clubs history, and in 1985/86 reached the FA Cup Third Round Proper, after beating a Football League club, Hartlepool United, only to lose 3-1 at home to Rotherham United. The club did however manage to finish as Gola league runners-up, with manager Sean Marshall winning the Gola League Manager of the Year award. During their time in the Gola League, four Frickley players were chosen to play in England non-league teams (now called England C), Gary Hooley, Paul Shirtliff, Paul Wilson, and Russ Wilcox (who went on to play over 500 games in the Football League and subsequently moved into league club management).

The following season saw a complete reversal of fortune as The Blues lost their first games in both the FA Cup and FA Trophy, finished second bottom in the league and were relegated back into the Northern Premier League (NPL).

From 1987/88 to 1991/92 the club consistently finished around mid-table in the NPL but did manage to reach the League Cup Final in 1991/92 for the first and only time, losing 1-0 to a last minute goal by Marine at Manchester City's Maine Road ground. The next two seasons saw Frickley finish seventh and fifth in the league, but for the following eleven seasons they struggled to find success and finished in the lower reaches of the table.

Then, in 2005/06 the Blues enjoyed their most successful league season for twenty years as they finished runners-up to Blyth Spartans in an exciting race for the league title. Unfortunately though, the Blues were defeated on penalties in the Play-off Semi-Final against North Ferriby United. Incredibly, this was their fourth penalty shoot-out defeat of the season.

In the following nine seasons Frickley returned to finishing in the lower half of the table, battling against relegation in several of their years, but 2015/16 saw the club have an excellent season to finish in seventh place, with a brilliant late season nine match unbeaten run (8 wins, 1 draw).

This was not repeated in 2016/17 as most of the players who had brought this success were attracted to join other, more affluent clubs. The club lost their first eight matches, from which they never recovered, also losing their last 11 league games to be relegated from the NPL Premier Division, of which they had been members for 30 years.

2017/18 saw the club enter a new era, under the new ownership and management of Spencer Fearn, in the NPL Division One South. The team was rebuilt in the first half of the season and post-Christmas lost only 3 of 21 games, to finish third in the league scoring an incredible 117 goals, breaking both the club and NPL Division One South record for the amount of league goals scored in a season. Additionally, Jacob Hazel broke the Club record for individual goals in a season with 47 and Gavin Allott passed the 100 goals-scored mark for Frickley. The club also scored in 51 of their 52 games in the season. Despite having a terrific season the club didn’t manage to win the promotion Play-offs, losing disappointingly 2-1 to Stamford in the Semi-Finals.

Season 2018/19, in the new NPL East Division, was less successful one, seeing managerial changes - experienced manager Martin McIntosh took over in November 2018 - and a twelfth place finish. However, the season was not without its highlights with a fine home win against Stamford and victory on the road at Marske and eventual champions, Morpeth. And in the cups, the bright spots were a mighty 10-1 win against Liversedge in the FA Cup (the highest score in the 2018/19 FA Cup) and an appearance on the BBC against Maltby Main.

More managerial change followed prior to the start of 2019/20, along with another league reorganisation, which saw the Blues go into the NPL South/East Division with Craig Spink at the helm. After a poor start, Dave Frecklington took charge in September 2019. ‘Frecks’ rapidly turned the side’s fortunes around, taking them from last place with zero points to the top half of the table before lockdown ended the season. Promotion back to the NPL Premier Division will undoubtedly be the aim for ‘Frecks’ and his team in 2020/21.