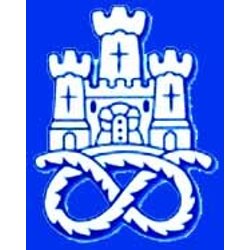 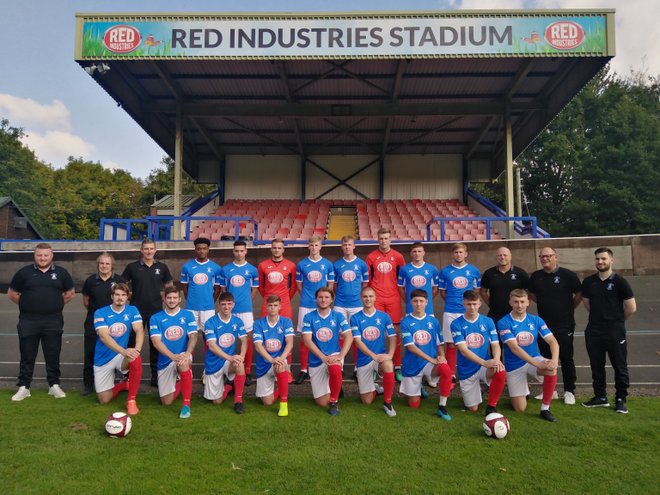 Ethan Vale has returned to Newcastle Town for the upcoming 2020/21 season.

Newcastle Town have announced that Nathan Morley has agreed to a new deal with the club.

Newcastle Town FC emerged in its current format from a merger with Parkway Clayton in 1986 and are now enjoying life in Northern Premier League.

The Stadium, deep in the Lyme Valley Parkway in Newcastle-under-Lyme, Staffordshire has a capacity of 4,000, covered accommodation for 1,000, seating for 300, a clubhouse which offers amongst other beverages quality cask conditioned ale, and a £85,000 floodlighting system. The playing surface is surrounded by one of the few recognised cycling tracks in the north of the country which hosts many competitions and has been used by the Great British Cycling Team in the recent past.

In the season immediately after the merger with Parkway Clayton, Newcastle Town enjoyed much success ending runners-up in the Mid Cheshire League and moving into the North West Counties League (NWCL) as a limited company in 1987.

In the ‘96/97 season the club enjoyed a tremendous run in the FA Cup defeating Winsford United, Frickley and Bamber Town from the Unibond League on their way to the First Round Proper where they narrowly lost to Notts County, at what was to be one of the last cup ties at Stoke City’s famous Victoria Ground.

Following the turn of the century promotion continued to escape the clutches of Newcastle although playing extremely entertaining football under the likes of managers Ray Walker before his move to Crewe Alexandra and Nigel Gleghorn formerly with Stoke City.

In the season 2006/07, Town form fell away after a very promising start and management duo Greg Clowes and Dorian Garner took over the reins after a successful period with Unibond side Alsager Town. Results picked up and new players arrived with Castle only losing 4 of their last 18 games in the new duos first season in charge. Paul Ratcliffe also took over as Chairman of the club at this time.

Finally, in Season 2009/10 Newcastle Town achieved their dream of promotion. They led the Vodkat League from day one and by the time they dropped their first points having won the first 28 games, the title was almost secure.

Undaunted the club followed current policy and appointed from within with John Diskin, Dave Sutton and Ivan Lodge being promoted from their respective roles with both the Second Team and the Youth Team. Their brief was to rebuild a First Team squad capable of confirming their position within the EVO-STIK First Division. Castle achieved their immediate goal sitting mid-table with notable results against teams challenging for promotion this season as well as winning performances in competitions against teams from higher divisions.

Castle ended the 2011/12 season in a respectable position but with higher hopes as there was a great deal of success from the younger players coming through at the club. Town’s Under 16s secured a Sentinel Shield win after a gap of 25 years since they last won the trophy in 1987.

Town continued to build for the future in 2012/13 in a season which saw an influx of their successful Youth Team into the First Team Squad as the season progressed. The Sentinel Cup was won for the first time since 1995 beating Alsager Town by a record 8-1 victory. During and after the season, many of Towns talented players eventually went onto play professional football with Tom Conlon signing for Peterborough United, Josh Gordon eventually going to Leicester City and Rai Simons going to Chesterfield FC.

Season 2013/14 saw Castle’s young side improve throughout the season and finish a very respectable eighth in the League. With the Young Reserve side reaching the final of the Leek Cup and the Youth Team winning the County Youth Floodlit Cup, it was good season for Town. Jeff Harrall took over as Chairman as Paul Ratcliffe stepped down.

Further improvement came in 2014/15 with Castle reaching the Play-offs where they were defeated by Sutton Coldfield Town, who were promoted to the Premier Division. Town’s policy of developing youngsters paid dividends as more trophies were forthcoming. Newcastle also won awards for Fair Play and their lack of dissent as they build a reputation of playing the game in the right manner with good football.

A Sentinel Cup win against Meir KA in extra-time saw our Under 17s, which included Love Island and Celebrity saw Wes Nelson play, claim the trophy with the Under 16s also claiming the Sentinel Shield, also after extra-time.

The season saw Town struggle with injuries culminating with Manager Ivan Lodge suffering a stroke. Ivan decided to step down to concentrate on his recovery and at the end of the season his brother-in-law and former Norton and Witton Manager Scott Dundas was appointed with assistant Steve Chadwick to the role to take the Club forward.

The 2016 Sentinel Cup saw more competition history as Newcastle had both their Under 18s and Under 17s competing in the final, which was held at Vale Park. It was the Under 17s who eventually won the competition with a 3-2 win.

The Under 16s won the Midland Junior Premier League Trophy as well, the first in the clubs history.

A major development for the club happened in July 2016 when the Youth Section moved to a new home. The Roe Lane Playing Fields site is a 20-acre football centre, with 14 well sized changing rooms, a club shop, offices, and community room, located in Newcastle-under-Lyme, just 1 mile away from the First Teams Lyme Valley home.

The First Team had a strong season, being in contention throughout for a Play-off position but narrowly missed out on the last day of the season.

At the end of the 2017/18 season, Manager Scott Dundas resigned and was replaced by Bob Askey, and after a promising start Castle dropped down the table towards relegation danger. Striker Jordan Cole was sold to Nantwich Town and Bob Askey was replaced by Robin Van Der Laan and Dave Dale, with Town eventually staying up on the last day of the season with a win against Belper Town FC.

The Sentinel Cup and Sentinel Shield was once again secured by the Under 18s and Under 16s, with Castle becoming a formidable force in these historic competitions.

The 2018/19 season saw big changes behind the scenes with former Chairman Paul Ratcliffe returning to a restructured board, which saw youth stalwart Gavin Appleby become Vice Chairman and former Chair Jeff Harrall move to Finance Director. A major sponsorship deal was agreed, seeing the stadium renamed The Red Industries Stadium and over the course of the season, the home, away and changing rooms were completed refurbished now hosting some of the best changing facilities in the league.

Unfortunately, in March (2019) the club mourned the passing of club legend Colin Spencer, after 44 years’ service.

On the pitch, the First Team produced a mixed bag of results however secured their place in the league easily, with one of the youngest teams in the Division. Another Town striker, Aaron Bott was sold to neighbours Leek Town FC in September and at the end of the season, popular midfielder James Steele also left, sold to Widnes FC.

There was more success from the youth set up as the Under 18s retained the Sentinel Cup for a record breaking fifth time in a row, the Under 17s won the Staffordshire County Cup and the Under 16s achieved a third in a row Sentinel Shield win.

The 2019/20 season saw even more improvements at the club, with an extensive pitch renovation supported by local contractor Campeys which saw visitors from across Europe to see the work being undertaken, and the club office was replaced also. The young team had spells of inconsistency and despite being bottom of the table for three consecutive weeks, Town pulled themselves safely away from the from the relegation area.

Sadly, the season was cut short due to the Coronavirus pandemic.