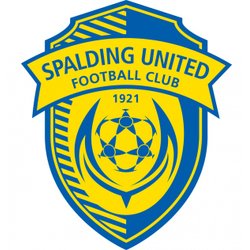 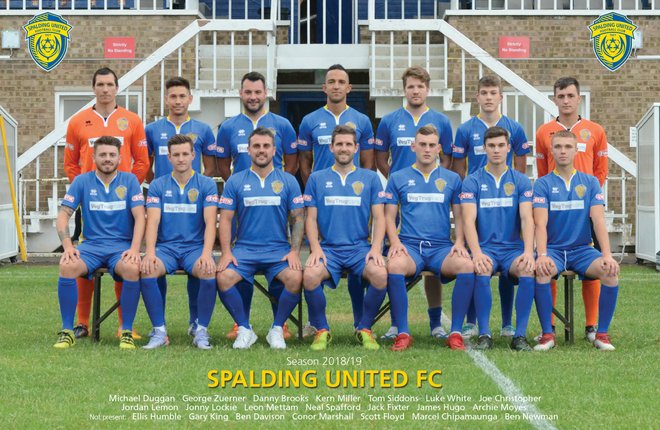 Spalding United have continued their signing spree with the addition of Lyes Mezine.

Spalding United have announced the signing of James Hugo.

Lewis Thorogood has resigned as manager of Spalding United, the club has confirmed.

Spalding United have announced the signings of Mitch Griffiths and Tyrell Shannon-Lewis.

Jock Curran and Cameron Painter have joined Spalding United on a three-month loan from Grimsby Town.

A chance sighting of an early team photograph on social media prompted some investigation and evidence gained shows that the club was formed back in 1905 following the amalgamation of the Fulney Institute and Victoria’s clubs was confirmed at a meeting in a local hostelry when it was decided that the name should be Spalding United.

The club has reached the First Round Proper of the FA Cup on two occasions. In 1957/58 they lost 3-1 to Durham City and in 1964/65 they played Football League opposition for the first time, being beaten 5-3 in a thrilling encounter at Newport County. Spalding became United Counties League champions for the first time in 1955, having been runners-up in 1951, 1952 and 1953. They joined the Eastern Counties League but were without success and joined the Central Alliance League. They stayed just one season before transferring to the re-formed Midland League in 1961. In 1968 they rejoined the United Counties League and won the title for a second time in 1975.

In 1989/90 Spalding enjoyed an excellent run in the FA Vase, progressing to a home Quarter-Final tie with Guiseley, who included former Leicester City and England striker Frank Worthington in their side. A crowd of 2,020 saw Guiseley win 3-1 in extra-time, having equalised in stoppage time. Things took a downturn with relegation back to the United Counties League the following season. The club went into decline, but recovery came in 1995 when Spalding won the League Knockout Cup and in 1997 they were runners-up in the league, as well as reaching the last sixteen of the FA Vase when they were defeated by Taunton Town.

In 1998 they finished third in the league and again reached the Quarter-Final stage of the FA Vase, losing 2-1 at home to eventual winners Tiverton Town in front of 2,038 spectators. In 1998/99 the club won the United Counties League championship, the Lincolnshire A Cup and the Hinchingbrooke Cup. As UCL champions Spalding regained membership of the Southern League and competed in the Eastern Division for season 1999/2000. They finished in a creditable fifteenth position.

The next three seasons proved less successful and despite narrowly avoiding relegation they eventually returned to the UCL. Season 2003/04 saw a revival in fortunes, winning the UCL championship and the East Anglian Cup for the first time, beating Aveley 3-1. 2004/5 was the club’s debut in the Northern Premier League (NPL), and despite only finishing eighteenth they managed to retain the East Anglian cup, beating Lowestoft 4-2 in the Final.

The following season proved less successful and it wasn’t until the 2006/07 season that saw the Tulips return to the Southern League for a third time . But in the final phase of FA restructuring the club was relocated back to the UniBond/NPL League for the 2007/08 season, competing in Division One (South). The club then experienced a number of difficult seasons trying to maintain their status at Step 4.

2011/12 started on a high with a partnership deal with top local junior club Spalding Athletic JFC, putting us in contact with age group football from Under-7 to Under-18. Sadly, the season ended in relegation but despite this set back they aimed at a return to step 4. In 2012/13 they narrowly missed winning promotion by one point but won the UCL Knockout Cup, beating promoted St Ives Town 4-0 in the Final.

The UCL championship trophy, however, was brought back to town in convincing style in 2013/14 season with the title secured with four matches of the season remaining. Looking to build on the success of winning promotion to Level 4, the “Boardroom” was strengthened by the appointment of a Chief Executive Officer in local businessman and former player, Malcolm Gray. With the formation of a reserve side and a commitment to strengthen the club as part of the local community, the club looked forward to the challenge of establishing itself at Step 4.

A return to the Evo-Stik NPL for the 2014/15 season was highly successful with the team always placed in the leading group and eventually finished in a very respectful seventh position in Division One South. The season also saw the introduction of an Under-18 team.

The end of season brought changes off the field with Chairman and Director Chris Toynton stepping down and a consortium of local investors taking up the reins with the aim and challenge of taking the club forward. Andrew Gay was appointed as the new Chairman.

November 2015 saw the resignation of manager Pat Rayment after almost four years in charge and replaced by his assistant Marcus Ebdon, who resigned at the end of the season. David Frecklington, who played for the Tulips at the end of the 1990s, and who had been at the helm of Lincoln United for the past three seasons, returned to the Sir Halley Stewart Field as Ebdon’s successor. However, Frecklington moved on in mid-February, joining Gainsborough Trinity. His assistant with the Tulips, Chris Rawlinson, was appointed his successor.

The 2016/17 campaign evolved as their best ever, finishing in their highest ever placing in the modern Football Pyramid. The Tulips finished in third position in NPL First Division South, just missing out on promotion from Step 4 when losing by the odd goal in three away to second placed Witton Albion. The Tulips had, in fact, never been outside the top three all season. In addition the club had three players – Nathan Stainfield (for the third time), Michael Duggan and Bradley Wells named in the South Division team of the Year.

An Under-21 Development squad was introduced into the ranks. for the 2017/18 season and they ended up as runners-up in the south section of the Lincs FA League. The successful senior team, however, began to break up with a number of players moving to higher grade clubs. A reduced budget mid-season also curtailed manager Chris Rawlinson’s rebuilding plans to a degree, but Under-21 squad members were given their opportunity to play Step 4 football and they did not let the club down. A thirteenth position at the end of season was considered highly satisfactory.

Following an indifferent start to the 2018/19 season manager Chris Rawlinson and Chairman Andy Gay mutually agreed to part company. Assistant manager Matt Easton was put in temporary charge of the team but formally took over the reins towards the end of September.

The season, however, was largely disappointing with the team languishing in the lower regions almost throughout and ultimately just avoiding relegation. The end of October, 2019 heralded a new era with new ownership of the club with an influx of new shareholders and directors in a complete restructure of the company and board. The new emphasis being putting the community of Spalding at the heart of everything the club envisaged.

In early December manager Matt Easton rocked the club by unexpectedly resigning. His assistant Lewis Thorogood stepped up to fill the breach on a temporary basis and as the season was forced to a premature end due to the COVID-19 virus epidemic, he was handed the position on a permanent basis.

A new era for the club began on August 19, 2020, when it was announced that pending FA and League approval, with AK Holdings agreeing the purchase of Spalding United Football Club. Andrew Killingsworth owner of AK Holdings would be the new and proud owner of SUFC with Leigh Porter installed as the new CEO. Former Chairman Andrew Gay will remain at the club as Vice-Chairman.