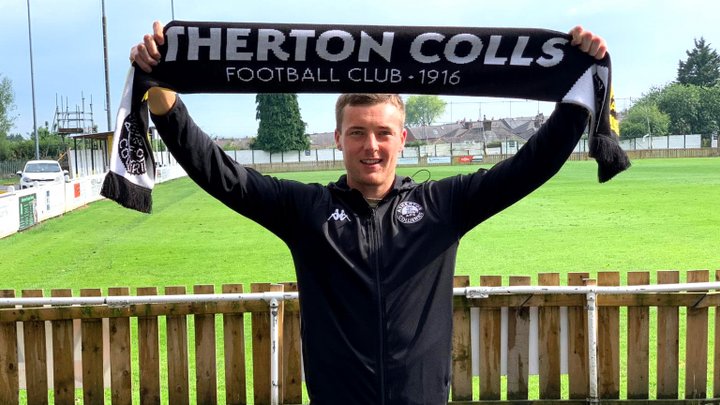 Sambor, 21, joins from Witton Albion where he caught the eye last season with two goals against FC United and a dramatic late winner away at South Shields.

Manager Brad Cooke said: “I have admired Kyle since I first saw him for Cammell Lairds whilst I managed West Didsbury. Not long after that he signed for Witton, and I have kept an eye on his progress since.

“After meeting with him a couple of times, I knew he would be the perfect match for us. He is a very grounded lad who is hungry to make an impact, I am delighted to welcome him onboard.”

Striker Darr, 21, joins from North West Counties side Charnock Richard, where he scored 20 goals in 29 games last season, while Cusani arrives from Ashton Athletic having previously had a spell with Colls in 2018.

Cooke added: “Jordan was one of our main targets for this off-season. He is exactly what I want in a player and, more importantly, a person. He shows great intelligence for a 21 year old lad, who has been around at this level since he was 16 or 17, already learning a lot in his time.

“He had a great year last season, and we beat off a number of clubs to secure his signature. We are delighted that he has chosen to join us, he is ready to step up and continue his development, and he is a huge coup for the club.

“I am delighted Marcus has joined us! We watched him for Ashton Athletic during our 5-2 win there last season, and highlighted him as someone we wanted to bring back to the club. After having a chat, it was clear that he is desperate to make his mark at this level.”

 Four agree Witton stay Defender Josh Wardle, midfielders James Foley and Billy Smart and forward Will Jones have all agreed terms to remain at Witton Albion for the 2020-21 campaign.